The Ministry of Interior (MoI), represented by the General Directorate of Traffic, launched a unified Driving Training System (DTS) and Monitoring Centre at the... 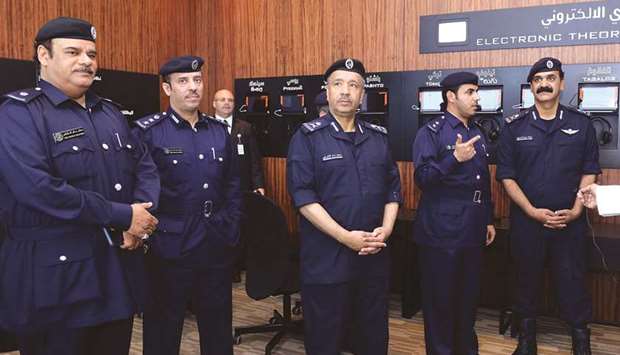 The Ministry of Interior (MoI), represented by the General Directorate of Traffic, launched a unified Driving Training System (DTS) and Monitoring Centre at the Traffic headquarters in Madinat Khalifa yesterday.
The Traffic Directorate also launched an automated 24-hour call centre service yesterday.
Considered a “first-of-its-kind” initiative in the region, the DTS and its monitoring system will function under the supervision of the Licensing Department at the General Directorate of Traffic.
It will improve training standards in driving schools and, in turn, help reduce road accidents, the MoI has said in a statement.
Also, the presence of only the driver in the car, without having a police officer next to him/her, is expected to “ease the stress of learners during tests”.
The DTS is a “comprehensive digital system that covers the registration process, training, tests and obtaining the licence”, according to the official Qatar News Agency (QNA).
Under the new system, a trainee can take the theoretical test in a language of his/her choice, from among 18 languages available, using the DTS app on his/her mobile phone or an iPad given by the driving school.
For practical tests, smart test vehicles with sensors will be used, while the parking test track at driving schools will also be equipped with sensors to provide test results electronically, officials explained.
The inaugural ceremony was attended by assistant Public Security director Major-General Abdullah Mohamed al-Suwaidi, Traffic director-general Major-General Mohamed Saad al-Kharji, National Traffic Safety Committee secretary Brigadier Mohamed Abdullah al-Malki, Engineering and Traffic Safety Department director Brigadier Mohamed Abdul Rahim Marafih, and the directors of various MoI departments.
While addressing the ceremony, Major-General al-Kharji hoped that the new system would contribute to bringing out well-trained drivers, thanks to the electronic system that is free from human intervention.
This will ensure impartiality and transparency in tests and results, he stressed.
“The decline in the number of road accidents and fatalities in the recent period is not a coincidence, but the result of such efforts from all partners involved in the traffic process,” he observed.
He said the DTS will facilitate different stages of the training process, from registration at the driving school to obtaining a driver’s licence.
It will offer the theoretical curriculum in 18 languages with text, audio and video contents, enabling learners from different educational and linguistic backgrounds to understand the lessons easily.
Learners can express their observations about the trainer and the training process through the DTS application installed on the learners’ mobile phones, Major-General al-Kharji said, stressing that the training hours will be strictly scrutinised and that any delay in training will be monitored through the operations room in the licensing department.
This will ensure that the trainee gets proper and adequate training, thereby enabling a high level of driving skills on the road.
He also pointed to the transparency of tests, due to non-intervention by humans, noting that the results will not be affected by fluctuations in the personal mood of the examine.
Besides, the learner can know his/her results immediately and will be able to identify the errors by watching the test screens on the DTS dashboard.
Major-General al-Kharji stressed that the DTS and its monitoring system is the first of its kind in the region.
Brigadier al-Malki praised the DTS, saying that the monitoring of drivers training electronically away from traditional methods is an “unparalleled development”.
He also noted that with only the driver in the car, without having a police officer next to him/her, will ease the stress of learners during tests.
The assistant director of the Traffic Awareness Department, Lieutenant-Colonel Jaber Mohamed Odeiba, said the DTS and the monitoring system would reduce human errors in the evaluation of tests, and make things clear to all, through the imaging process while the trainee will be convinced of the results.
It will also push driving schools to improve the training process, which will be reflected in overall traffic safety on roads.
He said the Traffic Directorate also launched an automated 24-hour call centre service – 2344444 – yesterday.
The head of the drivers’ licensing section, Lieutenant-Colonel Salem Fahd al-Marri, said the DTS will ensure that trainees are given 45 minutes of classes and they “benefit from its full share”.
This will be monitored through sensors and cameras fixed in the cars.
The DTS will have a full database for each car used in the training so that the Traffic Directorate can monitor its licence permit, insurance and validity to use for training.
The system is equipped with all details of the trainers and will also monitor the high rate of failure of any specific trainer, which means that person may need further qualification and training as a driving instructor.
“The learner can access the DTS by downloading its app on his/her mobile device, or they can get an iPad from the driving school,” he said.
Lieutenant-Colonel al-Marri said the learners would be able to know about their training schedule, the status of the trainer, the replacement if the trainer is on leave, and so on.
Learners can register complaints or comment about the trainer using the DTS, which will be looked into and solved within 48 hours.