Qatar coach Felix Sanchez has hailed his team’s desire to achieve a result in their 2-2 draw against Paraguay at the Copa America on... 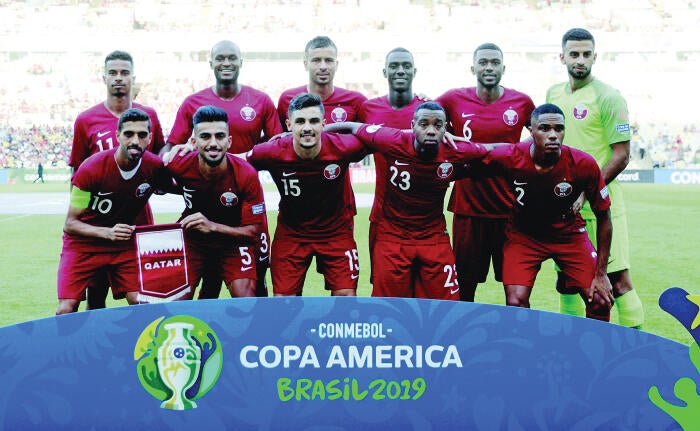 Qatar coach Felix Sanchez has hailed his team’s desire to achieve a result in their 2-2 draw against Paraguay at the Copa America on Sunday.

The Asian champions made their South American bow with a stunning comeback after going down by two goals despite controlling possession for most of the game.

“The result is fair, we deserved a point,” said Sanchez after the match.

“The players showed a desire to continue after conceding, and this is the most important thing for us,” the Spaniard added.

Qatar started poorly as a defensive slip led to a handball in the 18-yard box with just inside three minutes played. Oscar Cardozo made no mistake from the spot, scoring the second fastest penalty in the Copa, behind Alcides Silveira’s 1959 strike in the second minute. Derlis Gonzalez made it two for the two-time champions early in the second half.

Qatar had chances to score earlier on but Almoez Ali, Hassan al Haydos and Abdulaziz Hatem all failed to convert.

“We can do better and our performance is a factor that we have to improve ahead of the next game,” Sanchez said.

Almoez Ali did his reputation more good as he scored Qatar’s first goal at the tournament in the 67th minute. Boualem Khoukhi applied the finishing touch to the comeback as his effort was helped home by Rodrigo Rojas.

Almoez, who had a spectacular Asian Cup run in January — scoring nine goals in seven games to break Ali Daei’s tournament record as Qatar lifted the trophy in the UAE, however, struggled for form towards the end of last season dure to an injury.

“I want to appreciate the team for our performance. In the first half we made a few mistakes but we were able to make adjustments and get a result in the second half.

“We have objectives in this tournament and now after this draw, we have to focus on our next game against Colombia,” the 22-year-old Almoez said after the match.

The 2022 FIFA World Cup hosts have continued to prove doubters wrong with spirited performances on the pitch and will continue their journey against Group B leaders Colombia on Thursday at 12:30am Doha time.