Qatar came from two goals down to draw 2-2 against Paraguay in their Copa America debut, Rodrigo Rojas heading a Boualem Khoukhi effort into... 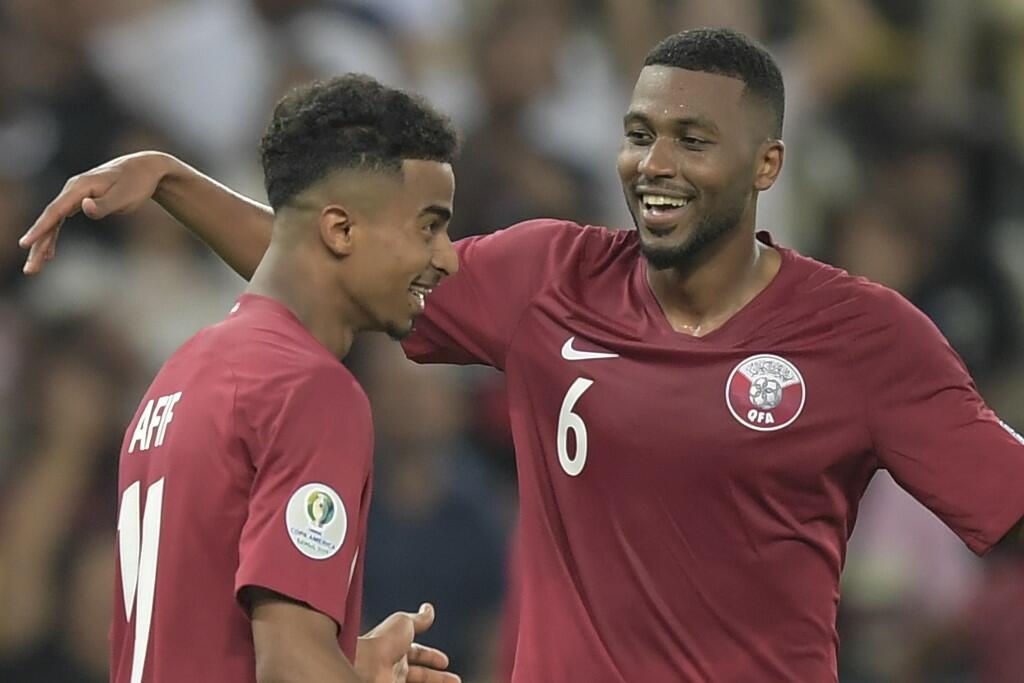 Qatar came from two goals down to draw 2-2 against Paraguay in their Copa America debut, Rodrigo Rojas heading a Boualem Khoukhi effort into his own goal for a bizarre late equaliser.

Paraguay looked set to claim all three Group B points in Rio de Janeiro on Sunday after taking a fourth-minute lead thanks to Oscar Cardozo’s penalty, with Derlis Gonzalez scoring an unstoppable second.

But invited guests Qatar, who won their maiden Asian Cup earlier this year, showed character to fight back and star man Almoez Ali got them back in the game with a curler from outside the box.

And when Khoukhi’s shot squeezed through Paraguay goalkeeper Roberto Fernandez, the backtracking Rojas could only nod the ball in before getting tangled in the net and seemingly damaging his shoulder.

Qatar made a chaotic start in their Copa debut, almost conceding in the first minute before Pedro Miguel gave away a penalty for blocking a Bruno Valdez header with his arm.

Paraguay striker Cardozo had not played at the Copa since 2007 but he stepped up to smash the resulting spot-kick straight down the middle to open the scoring.
Qatar should have levelled in the 16th minute but, arriving unmarked at the back post, Hassan Al Haydos somehow failed to convert a low left-wing cross from Abdelkarim Hassan.

Almoez Ali was denied by Roberto Fernandez on the stroke of half-time, with Paraguay seeing a second goal for Cardozo disallowed by VAR within five minutes of the restart.

Paraguay would not be denied in the 56th minute, however, as half-time substitute Gonzalez unleashed a 25-yard rocket that curled away from the desperate dive of goalkeeper Saad Al Sheeb.

Scoring nine goals at the Asian Cup marked Ali out as a man to watch and he unleashed a terrific hit from 20 yards to make it 2-1 and spark hope of a comeback.

And when Rojas lacked composure in front of his own goal with 13 minutes to play, Qatar had earned a priceless Copa point to justify their inclusion.

What does it mean? Paraguay lose momentum again

Before a friendly win over Guatemala, Paraguay had failed to win any of their past seven games. While there were signs of progress for Eduardo Berizzo’s side, with Almiron’s creativity marking him among the potential stars of the tournament, their old failings were on show again.

Qatar were industrious but they took until the second half to find their feet with Felix Sanchez’s side improving to earn a deserved draw, although their regular simulation was disappointing.

Gonzalez and Ali set targets for goal of the tournament

If there are better goals than the stunners scored by Gonzalez and Ali at this year’s Copa America, they will be well worth watching. Neither goalkeeper had any chance of saving the pair’s superb curling efforts.

Moment of madness for Rojas

There did not seem to be much danger when Rojas ran back to clear after Fernandez deflected Khoukhi’s shot, but he got his attempted clearance all wrong.

Instead of trying to loop the ball over the crossbar he instead appeared to try and head it wide, managing only to convert the equalizer. His embarrassment was compounded by getting stuck in the net and having to be substituted due to injury.

Qatar face Colombia in their next Group B game on Wednesday, when Paraguay will look to add to Argentina’s misery after their opening defeat.