Qatar Airways, the Official Partner and Official Airline of FIFA, has announced the launch of its stunning new TVC campaign celebrating the FIFA Women’s... 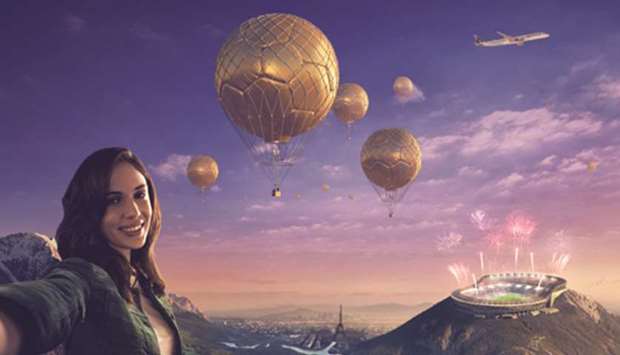 Qatar Airways, the Official Partner and Official Airline of FIFA, has announced the launch of its stunning new TVC campaign celebrating the FIFA Women’s World Cup France 2019, taking place from June 7 – July 7 in cities throughout France.
The innovative new film features a mother telling her daughter a wonderful bedtime story. It is a flight of imagination, in which she describes an amazing new land where women’s football reigns, where players rule and fans from many nations gather to cheer. The film features one of the most famous faces from the world of football, Brazilian football superstar Neymar, celebrating with fellow football fans.
By the ?lm’s end, the viewers realise that mother and daughter are in fact onboard a Qatar Airways aircraft flying to the very destination she has been describing: a magical land, where the story of women’s football comes alive, the airline said in a statement yesterday.
Qatar Airways Group chief executive, HE Akbar al-Baker, said: “Women’s football is bigger than ever before, and the FIFA Women’s World Cup France 2019 is the place where the hopes and dreams of many fans and supporters come true. It is truly a wonderful celebration of the women’s game. Our new campaign expresses the excitement of the many fans all over the world who will be watching the tournament as well as the tens of thousands who will travel to France to cheer for their national team in person. As an airline, we believe in the power of sports to unite people, and we look forward to bringing fans together in France this summer to take part in the most exciting event yet in women’s sports.”
Qatar Airways senior vice president Marketing and Corporate Communications, Salam al-Shawa, said: “The FIFA Women’s World Cup France 2019 is set to be one of the most thrilling events on the global sports calendar this summer, and this new campaign eloquently conveys the anticipation so many fans around the world feel as we prepare for the opening match of the tournament on June 7 in Paris. We are tremendously proud to be the Official Partner and Official Airline of FIFA, and we look forward to celebrating the spirit of the game this summer in France.”
A total of 24 qualifying teams will compete in nine cities throughout France this summer, including Paris, which will host the opening match, as well as Reims, Valenciennes, Le Havre, Rennes, Grenoble, Montpellier, Nice and Lyon, which will host the semi-finals and final match.
In May 2017, the award-winning airline announced its ground-breaking sponsorship deal with FIFA, which saw it become the Official Partner and Official Airline of FIFA until 2022. The agreement also sees Qatar Airways become the Official Airline Partner of the 2019, 2020, 2021 and 2022 editions of the FIFA Club World Cup, the FIFA U-20 World Cup, the FIFA U-17 World Cup, FIFA U-20 Women’s World Cup, the FIFA U-17 Women’s World Cup, the FIFA Beach Soccer World Cup, the FIFA Futsal World Cup, the FIFA eWorld Cup, and the FIFA Women’s World Cup.
The airline’s partnership with FIFA builds on its existing sponsorship strategy with premier sporting clubs around the world. In 2018 Qatar Airways signed a five-year partnership agreement with leading German football team FC Bayern München AG, making the award-winning airline an FC Bayern München platinum partner until June 2023. The airline also recently revealed multi-year sponsorship agreements with Italian football club AS Roma, for which it will become the Official Jersey Sponsor through the 2020-21 season; and with Argentinian football club Boca Juniors, for which it will become the Official Jersey Sponsor through the 2021-22 season.
A multiple-award-winning airline, Qatar Airways was named ‘World’s Best Business Class’ by the 2018 World Airline Awards, managed by international air transport rating organisation Skytrax. It was also named ‘Best Business Class Seat’, ‘Best Airline in the Middle East’, and ‘World’s Best First Class Airline Lounge’.
Qatar Airways currently operates a modern fleet of more than 250 aircraft via its hub, Hamad International Airport to more than 160 destinations worldwide. The airline will add a number of new destinations to its extensive route network in 2019, including Izmir, Turkey; Rabat, Morocco; Malta; Davao, Philippines; Lisbon, Portugal; Mogadishu, Somalia and Langkawi, Malaysia.