Amid mounds of sand capped by hand-written signs naming the dead, Khadom embraces the tomb of her son, one of the more than 200... 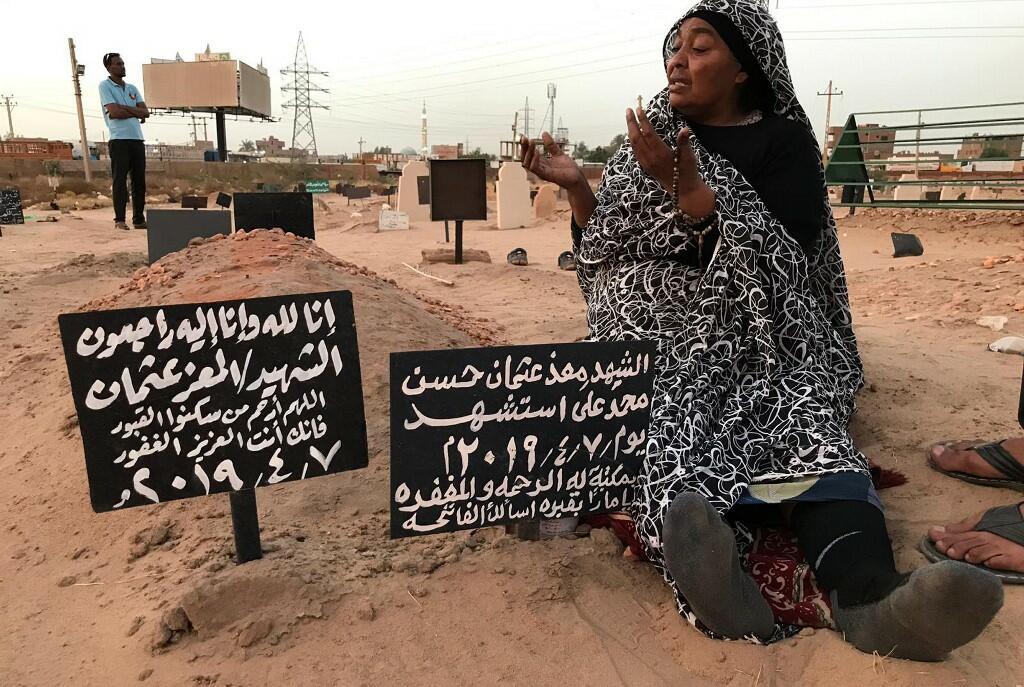 Amid mounds of sand capped by hand-written signs naming the dead, Khadom embraces the tomb of her son, one of the more than 200 killed in Sudan’s months-long turmoil.

It was an April morning when a freshly-shaven Al-Moez drank his tea before heading out to the office from the modest home he shared with his parents in Al-Rimela, southern Khartoum.

His office was in the same building as Qatar-based news channel Al-Jazeera and near a longstanding protest camp outside army headquarters in central Khartoum.

“The building was under surveillance by the all-powerful National Intelligence and Security Service (NISS),” Khadom told AFP.

Shortly after he arrived at work, a colleague started to take pictures with his mobile phone from a window of their office.

Out of nowhere, a bullet pierced the window and lodged itself in the heart of Al-Moez who was standing nearby. The 45-year-old died on the spot.

Like dozens of others who lost a son, uncle or brother, the family has paid a high price for Sudan’s revolution that toppled its longtime autocratic ruler Omar al-Bashir in April.

His parents have called for an official investigation and for his killer to pay the “eye for an eye” penalty.

But Khadom says there is little chance the case will come to trial or that the NISS will be found guilty.

Anti-regime protests which first broke out on December 19 after the tripling of bread prices have cost the lives of more than 200 demonstrators, according to doctors close to the protest movement.

Gatherings have been staged in front of the homes of the “martyrs”, whose portraits have been painted on walls across the capital.

“Blood for blood, we don’t want compensation!” they chant if security forces pass by in their pickups.

Their uncle, Ali, 25, was felled by a bullet in the back on June 3, the day gunmen in military uniform brutally dispersed the sit-in outside army headquarters that was in place since April 6.

More than 100 lives were lost that day alone and over 500 people wounded, according to the doctors.

“My brother died a martyr. We’re proud and I’m also prepared to die for the revolution,” said Yussef, 35, as tears welled up in his eyes.

‘Blood for blood, we don’t want compensation!’ protesters chant when security forces pass by in their pickups’.

‘Blood has not been shed in vain’

Eman, 24, also lost a brother in the massacre at the sit-in, which the protesters had initially launched to demand Bashir’s ouster and later to call on the generals to transfer power to a civilian administration.

A student in England, Mattar was back to visit the family and had just celebrated his 26th birthday when he decided to spend a night with the demonstrators at the sit-in.

“They killed him without mercy,” said Eman, whose brother’s fate evoked a campaign of solidarity on social media under the hashtag #blueformattar.

“Mattar gave his life. Now things in Sudan must change.”

Last Friday, crowds of jubilant Sudanese took to the streets to celebrate a landmark deal between protest leaders and ruling generals aimed at turning the page on seven months of political unrest.

Protest leaders said they had agreed on a transition period of three years and three months, with the first 21 months presided over by a military nominee, and the last 18 months by a civilian.

Demonstrators greeted the breakthrough with chants of “the martyrs’ blood has not been shed in vain” and “civilian rule, civilian rule”.

But Yussef, at the centre of the protests from the outset, said he would keep demonstrating because nothing significant would come from Sudan’s military.

“We still have a long way to go for a new Sudan… We must keep up the fight for future generations,” he said, glancing over at his sister’s boys Ahmed and Asir.