Cho Kuk’s appointment as justice minister, amid a prosecution investigation into his wife, fuelled anti-government protests. Prosecutors are seeking to arrest...

Prosecutors are seeking to arrest the wife of South Korea‘s former justice minister, who resigned last week amid allegations of financial crimes and academic fraud surrounding his family that sparked huge protests and dented the popularity of President Moon Jae-in.

The Seoul Central District Prosecutors’ Office on Monday said it requested an arrest warrant for Chung Kyung-shim, over her suspected involvement in dubious private equity investments and attempts to destroy evidence.

According to Yonhap, the 57-year-old Chung is also accused of fabricating a college presidential citation related to her daughter’s voluntary work at university in order to get her into medical school.

In early September, Chung was indicted on forgery charges while her husband was attending a parliamentary confirmation hearing as justice minister.

Chung is also accused of embezzlement and for violating the capital market law in relation to the private equity fund.

Officials from a Seoul court that is reviewing the request did not immediately comment on the report. 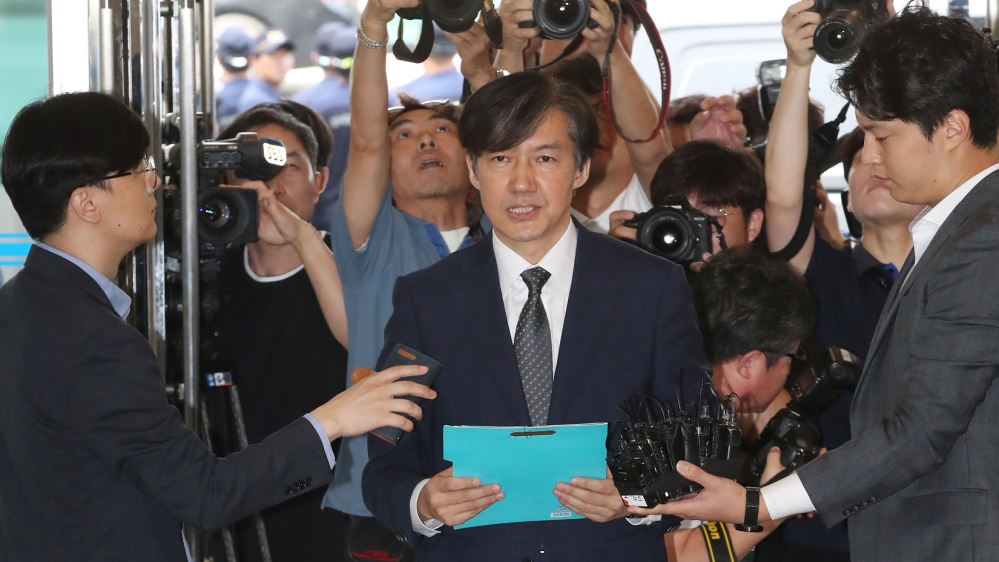 Following allegations against his wife, Cho Kuk was forced to resign on October 14 after serving as justice minister for just over a month [EPA via Yonhap]

The former justice minister said last week he was stepping down to reduce the political burden on Moon, whose approval ratings have dipped.

Cho was appointed by President Moon on September 9 to lead the reform of the country’s prosecutors’ office, but was forced to resign on October 14.

His appointment, amid the investigation into his family’s financial investments and his children’s’ university admission, fuelled protests.

Cho resigned as President Moon’s approval rating dropped to 41.4 percent, the lowest level since he became president in 2017. Since then his approval numbers have recovered slightly to 45.5 percent.