Morales speaks to supporters at the presidential palace in La Paz on Sunday night after early returns showed him leading in the count but...

President Evo Morales led in early returns from the first round of Sunday’s presidential election in Bolivia, but he appeared headed to a possible run-off in the tightest political race of his life.

The Andean country’s top electoral authority said on Sunday night that with 83 percent of the vote counted, Morales was on top with 45.3 percent, followed by 38.2 percent for his closest rival, former President Carlos Mesa.

If the results hold, there will be a run-off in December where Morales could be vulnerable to a united opposition.

“We’re in a run-off,” Mesa told supporters shortly after the first results were announced. He said his coalition had scored “an unquestionable triumph,” and called on others parties to join him for a “definitive triumph” in the second round.

South Korean-born evangelical pastor, Chi Hyun Chung, was in third place with 8.7 percent of the vote.

In a statement late on Sunday, Morales said he doubted a run-off would be necessary, saying rural votes would ensure an outright victory for him and his congressional allies.

Morales, who will turn 60 next week, has been at the helm of the poor but resource-rich Latin American country for 13 years, and a new mandate would keep him in power until 2025.

The former coca farmer and leftist union leader obtained Constitutional Court permission in 2017 to run again for president even though the constitution allows only two consecutive terms.

Mesa is a 66-year-old historian who as vice president rose to Bolivia’s top office when his predecessor resigned the presidency in 2003 amid widespread protests. Mesa, himself, was then forced to step aside in 2005 amid renewed demonstrations led by Morales, who was then leader of the coca growers union.

Voting, which is mandatory, was mostly calm, although police said they arrested more than 100 people for violating the country’s rigid election-day rules against drinking, large gatherings or casual driving.

To avoid a December run-off and win outright in Bolivia, Morales needs to get 50 percent of the votes plus one or, with a 40 percent share finish 10 percentage points ahead of the nearest challenger. 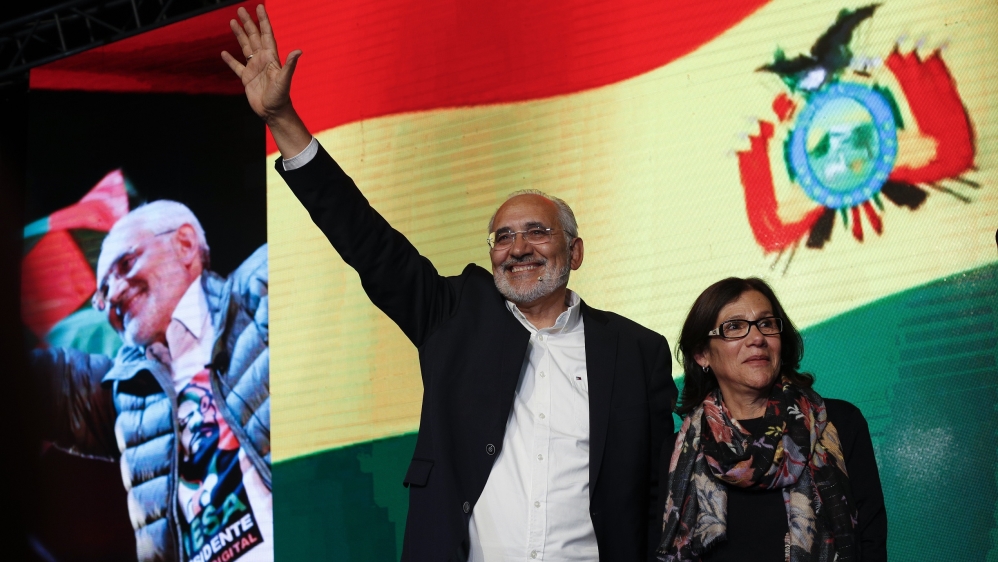 Morales voted early in the coca-growing region of El Chapare, where residents threw flower petals at him and he said he remained confident of his chances.

In his years in office, he allied himself with a leftist bloc of Latin American leaders and used revenues from the Andean country’s natural gas and minerals to redistribute wealth among the masses and lift millions out of poverty in the region’s poorest country.

The economy has grown by an annual average of about 4.5 percent, well above the regional average.

Morales, the son of Aymara Indian shepherds, has also been credited for battling racial inequalities.

But Morales also has faced growing dissatisfaction even among his indigenous supporters.

Some are frustrated by corruption scandals linked to his administration – although not Morales himself – and many by his refusal to accept a referendum on limiting presidential terms.

While Bolivians voted to maintain term limits in 2016, the country’s top court, which is seen by critics as friendly to the president, ruled that limits would violate Morales’ political rights as a citizen.

“I’m thinking of a real change because I think that Evo Morales has done what he had to do and should leave by the front door,” said Nicolas Choque, a car washer.

Bolivians were also electing all 166 congressional seats. Polls projected that no party would secure a majority in Congress, which could lead to an impasse for the upcoming administration.