As world leaders head to Warsaw this weekend to mark the 80th anniversary of the start of World War Two, Poland has once again... 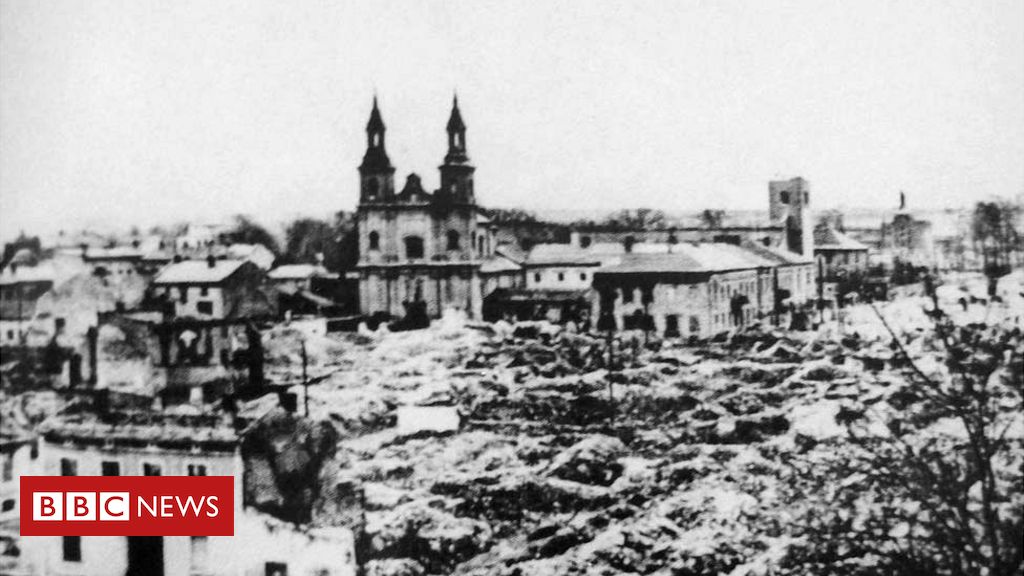 As world leaders head to Warsaw this weekend to mark the 80th anniversary of the start of World War Two, Poland has once again demanded compensation from Germany for the terrible losses it inflicted on the Polish nation during the conflict.

“We have lost six million people, many more than any other country that has received vast reparations. It is not fair. It cannot be this way,” Polish Prime Minister Mateusz Morawiecki said in an interview with German media.

A Polish parliamentary committee is still assessing the amount of compensation but it is likely to be more than a 1947 estimate by Poland’s communist regime that set the country’s wartime losses at $850bn (£700bn; €765bn) at current value.

“There is a lot to be analysed. The Germans razed to the ground over a thousand Polish villages. We will accurately determine the sum that we will demand,” he added.

How the war began

At dawn on 1 September, 1939, Germany bombed the Polish city of Wielun, a town with no military significance. The aim was to sow terror among the civilian population.

Hundreds were killed, buildings were flattened and the remaining population fled.

Two days after the invasion, Britain and France declared war on Germany. Two weeks later, Poland suffered a second invasion, this time from the Soviet Union in the east.

It is not widely known but Polish casualties during the bombing of Warsaw by the Luftwaffe in 1939 were about the same as those suffered by the Germans in the British bombing of Dresden in 1945, when up to 25,000 died.

The German invasion of Poland heralded the start of one of the bloodiest occupations of the war, in which the Germans killed millions of Polish citizens.

Estimates vary, but more than five million Polish citizens were killed during the war, perhaps as much as 17% of the population, including up to three million Polish Jews murdered by the Germans in the Holocaust.

After the failed 1944 uprising by Poland’s underground Home Army against the German occupiers in Warsaw, in which more Poles were killed than Japanese during the atomic bombing of Hiroshima and Nagasaki, Hitler gave orders for the Polish capital to be destroyed.

When the Red Army drove out the German occupiers from Warsaw in 1945, Stalin installed a compliant communist regime in Poland, which endured until 1989.

Churchill, Roosevelt and Stalin agreed that German reparations to Poland should be made via the Soviet Union in the form of materials, infrastructure and food rather than cash.

Governing party MP Arkadiusz Mularczyk said his parliamentary committee was estimating the value of the reparations made to Poland after the war. “Those reparations were not adequate to our losses. It was a very, very small amount,” he told the BBC.

“There are still old Polish people who have never received one euro in compensation and they feel very nervous. They are angry that Jewish people get compensation but the Poles get nothing,” he added.

According to a 2018 German-Polish opinion poll, 46% of Poles supported demands for reparations whilst 76% of Germans opposed the claims.

Mr Mularczyk said the commission should present its report following Poland’s parliamentary elections in October. The next step, he hopes, will be a discussion with Berlin about the issue.

Poland has yet to officially raise the issue with Germany. Indeed, the German government says the issue of reparations is legally closed.

In 1953, Poland signed up to an agreement between the USSR and communist East Germany stating that reparations would cease from 1954.

Mr Mularczyk said that agreement was not valid because Poland was “not an independent country” then and its prime minister, Boleslaw Bierut, was a Soviet agent. He said there were no governmental documents that proved Poland had waived its right to reparations.

Dr Agnieszka Lada, an expert on Polish-German relations from a Polish think-tank, the Institute of Public Affairs, doubts whether Warsaw will ever officially raise the matter with Berlin.

“Germany recognises that morally Poland has the right to ask for reparations but it also is aware that this is a domestic game played by the government for its own voters,” she told the BBC.

Indeed Mr Mularczyk acknowledges that raising the reparations issue is not only about compensation.

It also addresses the government’s concerns that when the world’s media inaccurately write about “Polish death camps” they are trying to rewrite the history of the period.

“This discussion about reparations is important for us because when objective journalists write about the Second World War they write about who the aggressor was and who were the victims,” he said.