Prime Minister Binyamin Netanyahu has vowed to apply Israeli sovereignty over all Jewish communities in the West Bank if he is re-elected in the... 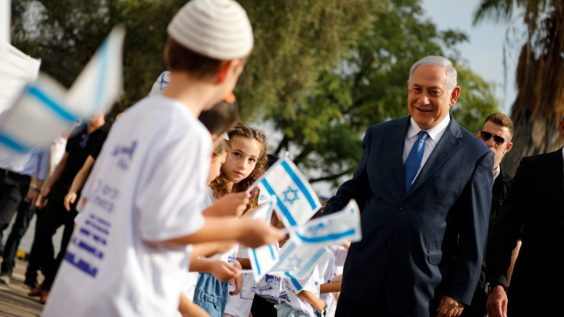 Prime Minister Binyamin Netanyahu has vowed to apply Israeli sovereignty over all Jewish communities in the West Bank if he is re-elected in the September 17 national vote. The Israeli leader emphasized that his first move would be to annex the strategic Jordan Valley, which Israel views as essential to its military’s ongoing ability to defend the country. “There is a unique and once-in-a-lifetime opportunity to do something with broad consensus and bring safe permanent borders to the State of Israel,” Netanyahu said. “This will ensure that Judea and Samaria [the biblical names for areas encompassing most of the West Bank] do not become Gaza, and that Kfar Saba, Netanya and Tel Aviv will not become like communities along the [southern] border.” Netanyahu also revealed that he would implement his plan in lockstep with US President Donald Trump, who will release his own long-delayed Israeli-Palestinian peace proposal in the coming weeks. In response, the Palestinian Authority slammed Netanyahu’s prospective move, with the Arab League adding that it “considers the announcement a dangerous development and a new Israeli aggression… [that would] violate international law.” Many analysts have noted that Netanyahu may be exaggerating in order to solidify his right-wing base ahead of next Tuesday’s vote. The prime minister’s Likud party is polling neck-and-neck with Benny Gantz’s Blue and White list, although Netanyahu will most likely receive the most recommendations from other party heads to be the first one tasked with forming a governing coalition.