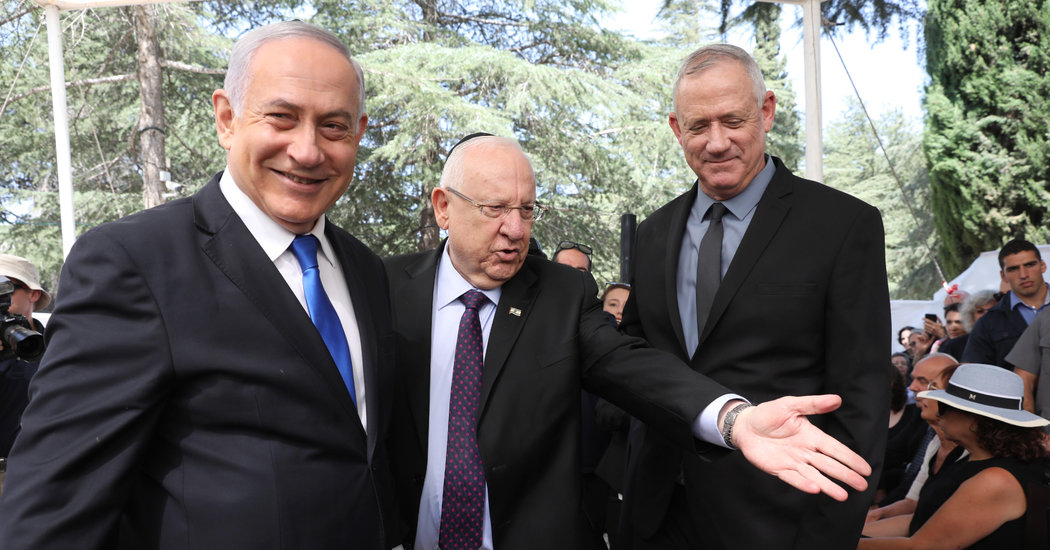 Mr. Netanyahu, facing a looming indictment in three corruption cases, is fighting for his political survival and, potentially, his freedom. His only chance of gaining immunity from prosecution would be to remain in the top office, though neither he nor Mr. Gantz emerged from Tuesday’s election with a clear path to the premiership.

Mr. Gantz had already called for a unity government, but for Mr. Netanyahu, time is of the essence. He has a special hearing with the attorney general set for Oct. 2, and charges could be filed soon after.

“I call on you, Benny, let’s meet today, at any hour, at any time, to set in motion this process,” Mr. Netanyahu said in a video message, calling it a matter of utmost urgency.

Mr. Gantz’s centrist Blue and White party came out of the election with a slight edge over Mr. Netanyahu’s conservative Likud. As the final votes were being tallied, Blue and White was projected to have won 33 seats to Likud’s 31.

Together, they would have a slim majority of 64 in the 120-seat Parliament. Neither has enough support from other parties to build a viable coalition on its own without defections from parties across the lines. The center-left bloc of parties appears to have won 57 seats, to 55 for the right-wing and religious parties.

[Read about how the election has also given new heft to Israel’s Arab politicians.]

Now Mr. Netanyahu, a brutal political warrior who had vilified his opponents during the campaign as soft leftists, is loudly staking a claim to be the bridge-builder. Analysts had predicted that the prime minister would engage in postelection maneuvering designed to confound his political opponents, and some Blue and White members warned that his appeal for a broad coalition was a bluff, designed to set Mr. Gantz up for failure.

“Netanyahu can place conditions that Gantz cannot meet,” said Abraham Diskin, an Israeli professor of political science. The negotiating teams of both Mr. Netanyahu and Mr. Gantz were “very shrewd,” he added. “We will eat the meal they cook.”

The secular, ultranationalist Yisrael Beiteinu party led by Avigdor Liberman, a former Netanyahu ally turned nemesis, has refused to join either bloc this time and holds the balance, having won at least eight seats. Mr. Liberman has said he would support only a broad, secular unity government, excluding ultra-Orthodox and right-wing extremist parties.

But forming a unity government would also be like putting together a puzzle with pieces that don’t quite fit. The two main rivals are both on record supporting such a coalition, but on conflicting terms.

Mr. Gantz has repeatedly pledged not to enter a coalition with Likud so long as its leader is facing indictment. Mr. Gantz also said before the election that, like Mr. Liberman, he wanted to form a broad, secular coalition, excluding ultra-Orthodox parties.

But Mr. Netanyahu already met with his former coalition partners from the right-wing and religious camps on Wednesday and vowed that they would stick together in coalition negotiations.

“Benny, this is not the time for disqualifications and boycotts, this is the moment to put our ego aside,” Miri Regev, a Likud lawmaker and Netanyahu loyalist, wrote on Twitter. “This is an undemocratic act on your part.”

Mr. Netanyahu would certainly demand a rotation agreement with Mr. Gantz, to split the four-year term as prime minister between them, as Yitzhak Shamir of Likud and Shimon Peres of the Labor Party did in the 1980s.

Yoaz Hendel, a member of Blue and White who used to work for Mr. Netanyahu, appeared not to rule out Mr. Netanyahu as a coalition partner, at least at this stage.

“In Blue and White, we want a unity government and we have principles about the person who is prime minister,” he said in a radio interview after Mr. Netanyahu’s call on Thursday.

“The prime minister cannot be someone who has been indicted,” he said, adding, “I think several constellations are possible, and no matter what, Benny Gantz must be prime minister first.”