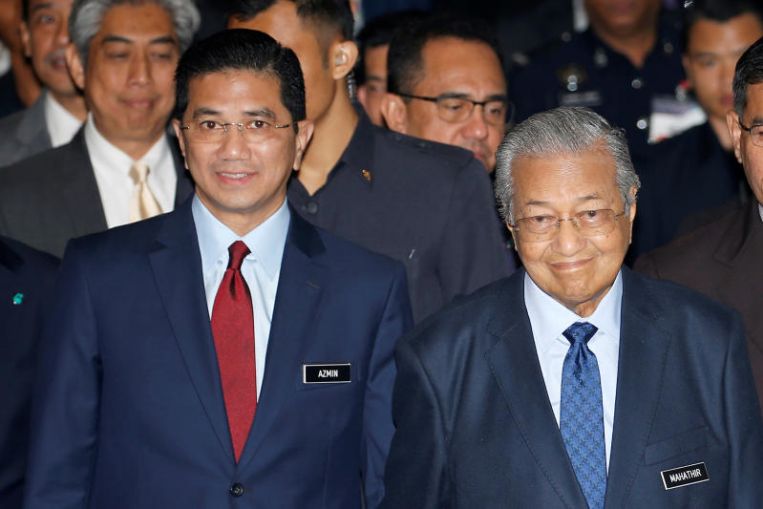 KUALA LUMPUR – Malaysia’s Prime Minister Mahathir Mohamad on Monday (June 24) again came to the defence of Economics Affairs Minister Azmin Ali, saying the minister does not have to step down over a sex-video scandal.

Asked to comment on the views of A. Kadir Jasin, Tun Mahathir’s media advisor, that Datuk Seri Azmin should step aside to protect the government from the explosive scandal, the Prime Minister said: “No, there is no necessity simply because in other countries people do something.”

“I know in one country if a plane crashes in the airfield, the minister of transport resigns or throws himself out of a building but it is not our way”, The Star daily quoted him as saying.

Datuk Kadir, who is also a supreme council member of Dr Mahathir’s Parti Pribumi Bersatu Malaysia (PPBM), wrote in his blog on Sunday that a Cabinet minister embroiled in a scandal should resign.

PPBM is one of the four member parties of the Pakatan Harapan alliance that governs Malaysia.

Mr Azmin has been accused by a member of his Parti Keadilan Rakyat of appearing in a video featuring two men engaged in sex acts on a bed.

The accuser Haziq Aziz claimed that he was one of the men in the video and the other man was Mr Azmin, a rising star in the Mahathir Cabinet.

Dr Mahathir told reporters on Monday: “I don’t think he (Azmin) is so stupid as to do that and get caught in a picture (videos) like that.

“I think somebody is out to bring him down.”

Dr Mahathir said anyone can have their pictures implicated in such compromising positions, thanks to the “miracles in electronics” in faking images.

“We have done away with the (Anti) Fake News Act but sometimes we feel somebody must take action against these fake news,” he added.

Malaysia’s Anti-Fake News Act that was approved during the previous Najib Razak government, is in the midst of being repealed.

This was the second time that Dr Mahathir had defended Mr Azmin’s position in the Cabinet.

When the scandal broke out in the middle of this month, the premier said Mr Azmin does not have to take leave from his post while the authorities investigate the matter.