By Sports Reporter/Doha An exciting and glittering opening of the IAAF Diamond League 2019 season is anticipated as the prestigious series gets underway at... 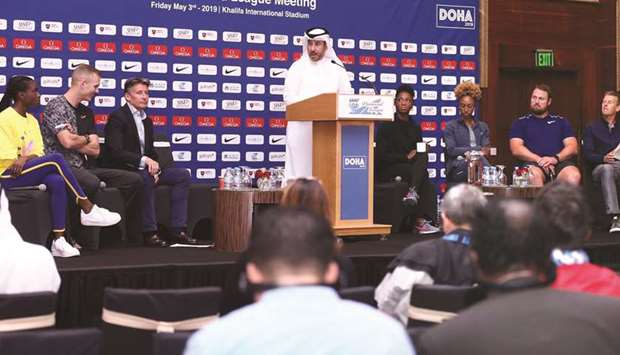 An exciting and glittering opening of the IAAF Diamond League 2019 season is anticipated as the prestigious series gets underway at the Khalifa International Stadium in Doha today.

For the tenth consecutive year, Qatar is hosting the season-opening meet of the highly-successful athletics top-tier series and IAAF President Sebastian Coe noted at the well-attended press conference yesterday.

“Doha is definitely the centre of the world for athletics in 2019 considering the array of events and tournaments culminating with the 2019 IAAF World Championships to be held here later in the year.

“It is my pleasure to welcome all participants to new venue after nine years of hosting this global event at the Qatar Sports Club. We are very pleased that you will be joining us for what promises to be another exciting time of athletics in Qatar.”
In his address, Coe said, “The IAAF Diamond League is increasing in popularity every year and we now have about 370 million people from about 170 countries watching the league annually.

“We feel it there is a need to make it bigger and better and that’s what have necessitated the review of the format as we go into the tenth year anniversary.”
Coe added that due to the importance of the IAAF Diamond League to the athletics body, the IAAF is responding to feedback from the various stakeholders – athletes, fans, broadcasters, administrators with the new format of the league which is scheduled to begin from the 2020 season.
The 2020 IAAF Diamond League will include the very best 12 meetings, based on the criteria developed in 2018, leading to a single final at the end of the season. An agreed 24 disciplines (12 male and 12 female) will run across the 12 meetings and the final, with the longest discipline being the 3,000m.

Each meeting will be broadcast globally in a faster-paced 90-minute television event which will link the events and the athletes’ points so fans can more readily follow the road to a single final at the end of the season.
“The IAAF Diamond League is very important because it is one of the major ways millions of people absorb our sport every year and it is a responsibility that we don’t take lightly,” Coe explained.

“I am happy with what we’ve done with the new format and as you know, the criteria has become tougher which will make the league more interesting. We are looking forward to a more exciting events and of course the IAAF World Championships in September is something everyone can’t wait enough to see it start,” he added.

Meanwhile, Asher-Smith, who is in the Middle East for the first time, has expressed her delight participating at the Doha IAAF Diamond League.
“It is exciting to be here in Doha for the first time and to start my season at the same venue of the 2019 IAAF World Championships.
“I can’t wait to compete on the beautiful tracks and I hope all goes as planned tomorrow,” said the British record holder in the 100m and 200m (10.85 and 21.89 respectively), achieved at the European Championships last August.
On his part, Kendricks, who is also appearing in Doha for the very first time said:
“Every Diamond League is important and I’m glad to be here. Though for us in the States, the season starts a bit earlier due to the spring season but this is my first major competition of the year.
“I’ve had a couple of good jumps and I’m hoping to jump at least 5.95m tomorrow – I hope the aim is achieved. The field is strong and the competition is tough but I think I am set and let’s see how things turn out tomorrow.”

To Olympic long jump champion, Bartoletta – Doha has always brought her fond memories:
“I’ve had good experiences here and each visit had been quite interesting. Even when I wasn’t expecting it, I ended up doing well and I think Doha has been generally good to me. I hope the luck continues tomorrow and I would be glad to win again in Doha,” said the 33-year-old who won the 2015 Doha event before going on to win the World Championships in Beijing later that year.

Brianna McNeal on the other hand, the runner-up in 200m at last year’s event, said she is more motivated to perform better this year:
“I’m very focused on what I need to do and I’m very prepared to give my best tomorrow. I hope to improve on my performance last year and I think I am in the right frame to win,” she said.

Tom Walsh believes that with USA’s Ryan Crouser’s current throw of 22.74m in 2019, which is the longest throw in the world since 1990 – the bar has already been set so high early in the season and this is going to be a great challenge for every other person to meet up with:
“Crouser has raised the bar for all of us and I believe the competition is going to be tough this year. I will definitely do my best and let’s see how things turn out,” he said.

Crouser is now the sixth best performer of all time and he will be on the field when the season kicks off  today.