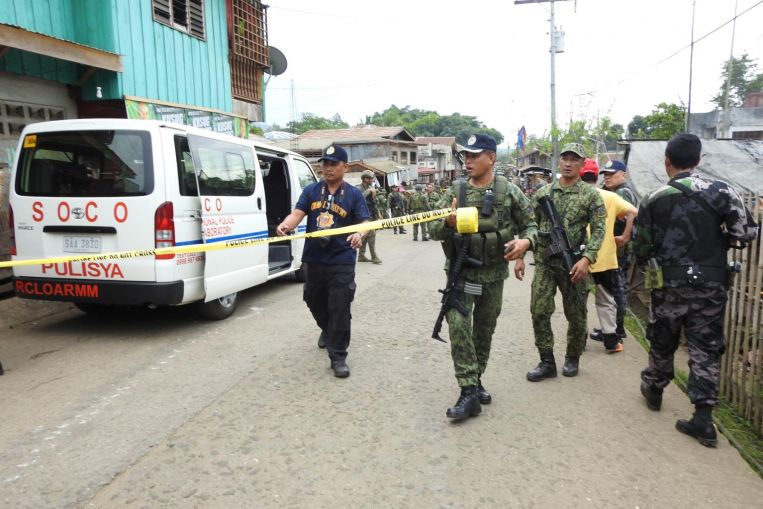 MANILA – Philippine security officials on Tuesday (July 23) confirmed that at least seven foreign terrorists were training local militants for suicide attacks in the country’s restive south, and there could possibly be dozens more.

“They are doing the usual. They are training bombers, grooming suicide bombers, as manifested by the recent incident. They are also training (Filipinos) on other terroristic actions,” Lieutenant-General Cirilito Sobejana, head of the military’s Western Mindanao Command, told reporters.

He said these foreign extremists were behind the first-ever suicide attack carried out by a Filipino.

On June 28, Norman Lasuca, 23, set off one of two bombs that exploded inside a temporary camp of a special army counter-terrorism unit in Indanan town, Sulu province.

Three soldiers who were manning the camp’s gate were killed, along with three civilians nearby.

Some of the terrorists were with the small but brutal Abu Sayyaf group in the island provinces of Sulu and Basilan, 1,000km south of the capital Manila. Others were with the Bangsamoro Islamic Freedom Fighters (BIFF) in central Mindanao.

Both the Abu Sayyaf and BIFF had pledged allegiance to the Islamic State in Iraq and Syria (ISIS).

But investigators have tagged two Indonesians in a suicide attack on a Roman Catholic cathedral in Sulu in January this year that killed 23 people and wounded at least 100.

They left Indonesia to join ISIS in March 2016 with their three children. But before they could reach Syria and Iraq, they were arrested in Turkey in January 2017 and deported to Indonesia that same month.

In Indonesia, they went through a short rehabilitation programme and were then released. They apparently later decided to pursue their cause in Mindanao instead and brought their children with them.

Investigators said their children are now with a faction of the Abu Sayyaf led by Hatib Hajan Sawadjaan that helped plot the attack on the Sulu cathedral.

In July last year, a Moroccan, identified as Abu Kathir Al-Maghribi, detonated bombs hidden inside a van that he drove to an army checkpoint on Basilan island, near Jolo. The blast instantly killed a soldier, five paramilitaries, four civilians – including a mother and her child – and the bomber.

Mr Rommel Banlaoi, head of the Philippine Institute for Peace, Violence and Terrorism Research, said earlier that an Egyptian couple, both veterans of the fighting in Syria and Afghanistan, were also in Sulu to train a younger crop of militants on suicide bombing.

“They are here to really carry out the instruction of the Islamic State to conduct intermittent bombing operations in the Philippines and to encourage the locals to conduct suicide bombings as their most effective weapons for (holy war),” he said.

Lt-Gen Sobejana said 42 other foreigners were on a watch list for possible links to terrorists.

“We can’t confirm that yet. We still have many criteria to validate before we can consider them terrorists,” he said.