The Palestinian national football team will play against its Saudi counterpart in the West Bank for the World Cup qualifiers – Palestinian Authority... 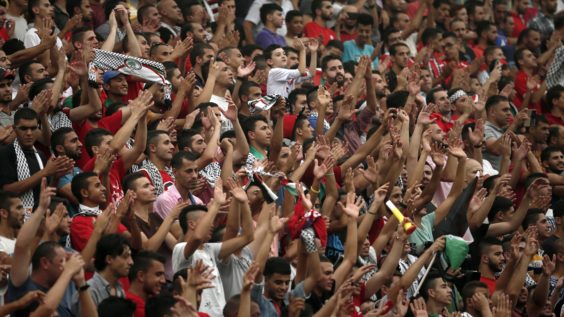 [Ramallah] – Palestinian Authority President Mahmoud Abbas announced on October 1 that the Palestinian national football team would play against its Saudi counterpart on October 15 as part of the World Cup qualifiers. The match will be held at Faisal Al-Husseini International Stadium in the West Bank city of Al-Ram, north of Jerusalem.

“We welcome the Saudi national team, which will arrive in our country for the first time to play in the land of Jerusalem … in the Asian Double Qualifiers, which qualifies for the Asian Cup and the World Cup,” Abbas said in a statement.

“The match is important in being the first of its kind, in which Palestine hosts the Saudi team on its own territory. This has political and moral significance, demonstrating support of the Palestinian people,” Omar Al Jafari, the spokesperson of the Palestinian Football Association (PFA) told The Media Line.

Al Jafari explained that the arrival of the Saudi team to play in Palestine reaffirmed a decision by FIFA, the international governing body of football, and the Asian Federation that Palestinians should be allowed to play in their own territory, despite the obstacles put up by “certain parties” to prevent it.

“For years, we Palestinians weren’t able to play on our land, until FIFA approved of us playing in our home stadium. Following that, football teams started coming to play against us in Palestine,” Al Jafari clarified.

Following the Palestinian national football team’s admission into FIFA in 1998, it had no official fixtures in the Palestinian territories for 10 years, due to security concerns. This changed with a match against Jordan on October 26, 2008, at Faisal Al-Husseini stadium, which finished in a 1–1 draw.

When asked about Israeli approval for the Saudi team members to enter the West Bank, a PFA spokesperson affirmed that they are going to receive a list of the Saudi players, to pursue the needed approvals for their admission like any other team in accordance with the PA’s arrangements with world federations.

“I don’t think that there will be a problem since the request comes under the FIFA umbrella. We didn’t apply yet but we will in a few days,” Al Jafari added.

Legal expert Dr. Hannas Issa, a senior PA official, told The Media Line that the PA views the planned match with Saudi Arabia as a substantial accomplishment before the international community since it demonstrates the PA’s ability to compete regionally and internationally.

“It indicates that the PA has managed to build strong institutions that have allowed Palestinians to rise to new levels of competitiveness in sports, with a regional and global presence,” Issa explained.

Achievement in sports, he explained, is a necessary milestone for the Palestinian people on their way toward their ultimate goal of achieving an independent Palestinian state, living side by side in peace with the state of Israel.

Until recently, the PFA was lacking quality facilities and qualified staff. During the winter season, Faisal Husseini stadium could be fully under water due to appropriate infrastructure and a lack of drainage.

To increase the interest among local sponsors and to help fund youth development, the PFA received financial support from the FIFA Forward program. That aid will be used to develop facilities that conform to international standards.

With the support of the FIFA Forward program, the member association started renovating Faisal Husseini stadium and installed additional seats, a drainage system and the latest generation of artificial turf, enabling the organization to host official international and domestic matches.

“Four years ago, Palestinians were supposed to play against the Saudi Arabian national team in the West Bank but the Saudi government refused the invitation under the pretext that it was a form of ‘normalization’ with Israel [since the team members would need Israeli approval to enter the territory]. Since then, the Palestinian national team has had to play outside of their country, in Jordan, instead,” revealed sports journalist Ahmed al-Ali to The Media Line.

However, al-Ali said, Palestinians were pleasantly surprised to learn last night that the Saudi national team was going to play against them in their homeland, as per FIFA instructions.

“Technically, it’s known that when a team plays in its own country, in the presence of its own audience and fans, it performs much better,” he elaborated. “It is a basic right of every sports association for its team to play one match at home and the next away.”

Al-Ali said that since 2010, there has been considerable interest at a political level in most Palestinian sports groups. This has spurred the government to lay the foundations for a strengthened sports sector in the West Bank.

Previously, Abbas appealed to Saudi King Salman bin Abdulaziz to accept his country’s invitation for the Saudi and Palestinian national teams to play in the Palestinian territories for the Asian World Cup qualifiers. This was in line with FIFA requirements and would fulfill a Palestinian dream to exercise the right of all teams to play in their national stadiums, at home among fans, as in any other country.