Palestinians Reject ‘Deal of the Century’

Mideast experts say wider Arab world will turn its back on Trump Administration peace plan Arab and Palestinian opinion is nearly universal in its... 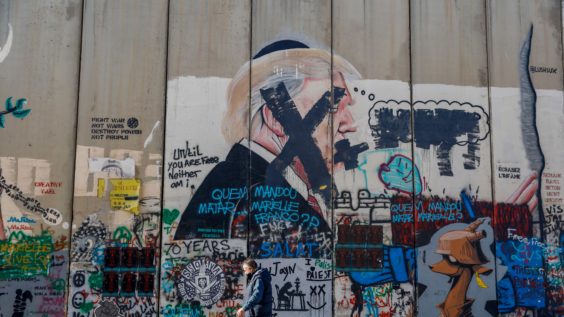 Arab and Palestinian opinion is nearly universal in its rejection of what has been leaked about the so-called deal of the century, the peace proposal that US President Donald Trump apparently plans to announce in the coming days.

The leaks indicate that the plan is based on a two-state solution, although with the future Palestinian state demilitarized to allow Israel to retain security control. In addition, the Palestinian Authority (PA) would have to disarm Hamas, the ruler of the Gaza Strip, as a precondition for statehood.

Saeb Erekat, chief Palestinian negotiator and secretary-general of the PLO Executive Committee, told The Media Line that  President Trump was trying to make peace between Israeli Prime Minister Binyamin Netanyahu and his main political rival, Blue and White list leader Benny Gantz, and not between Israel and the Palestinians.

The US president, he said, wanted to dictate a solution to the Palestinian people “by changing the Israeli occupation from temporary to permanent. This is a destruction of international law and international legitimacy.”

He added that the administration was attempting to impose “weak and fake solutions” that were destined to fail, with the plan being rejected by all Palestinians as well as Arab countries.

“This deal is the destruction of all the foundations, references and agreements signed with the Israeli side, and it compels us to return to implementing the decisions of the National and Central councils of the Palestine Liberation Organization,” he stated.

The PA was formed as an interim governing body under the 1993 Oslo I Accord − signed by then-Israeli prime minister Yitzhak Rabin and PLO chief Yasser Arafat − and was meant to be dissolved after no more than five years as part of a final peace agreement.

PA President Mahmoud Abbas has shunned Washington since its recognition in December 2017 of Jerusalem as Israel’s capital.

Ghasan Khatib, a professor of political science at Birzeit University near the West Bank city of Ramallah, told The Media Line that while the leaks were unreliable, the American plan would in any case be rejected by the Palestinians because it is based on the positions of the current administration and thus biased in favor of Israel.

“The deal is self-evidently linked to the positions of the American administration, which are unacceptable to Palestinians,” he said.

Khatib pointed out that the Palestinian leadership has yet to announce an official position.

“No formal decision has been taken by the PA as of yet,” he said.

He explained that the PA has formed a committee to study options aimed at canceling its recognition of Israel, as well as any signed agreements, although the threat of such actions was geared toward satisfying the Palestinian public.

“I don’t think this type of procedure will be the response, and if it is, it won’t affect Israel,” Khatib said.

According to the leaks, Trump’s proposal defines the Jordan Valley as Israel’s eastern security border, and if the latter decides to annex the area, it will have to compensate the Palestinians with alternative territory adjacent to the Gaza Strip and Egypt.

West Bank settlements would remain under Israeli control, while dozens of outposts that are considered illegal by Israel would be evacuated. Construction would be frozen in isolated settlements outside the large settlement blocs.

Naji al-Thatha, a Gaza-based political analyst and freelance writer, told The Media Line that the timing of the American plan “clearly” served both Netanyahu and Trump “as it elevates both of them [and] shows their ability to achieve change and that they can do what no one else can.”

He added that from the start, the Palestinian leadership had failed to rise to the challenges posed by the deal.

“Abbas was very excited about it in the beginning because he thought it would provide economic benefits,” Thatha explained. “But after he understood that the deal says no to a Palestinian state [of the type being demanded], no to Jerusalem and no to a contiguous Palestinian entity, Abbas changed his mind.”

The American plan, in its expected form, represents a complete break with the official Palestinian position, which was agreed upon with previous US administrations, he said.

“Let’s not forget that [the] Oslo [Accord] was signed in Washington. Well, all of that has now been erased,” he stated.

Fawzi Barhoum, Hamas’s spokesman in the Gaza Strip, has said “the American-Israeli arrangements regarding the Palestinian issue to implement the so-called deal of the century are targeting the Palestinian presence, the identity of Jerusalem and the nation’s relationship with Palestine and the Aqsa Mosque.”

Jordanian Foreign Minister Ayman al-Safadi warned that if Israel annexed the West Bank portions of the Jordan Valley and the northern Dead Sea, as Netanyahu has pledged, this would “blow up the foundations of the peace process” and kill the two-state solution, and thus end all chances of achieving peace.

Daoud Kuttab, a respected Amman-based journalist and columnist, told The Media Line that Jordan would tolerate no attempts to change the accepted trajectory of relations.

“The foreign minister has made it clear that the government hasn’t changed at all its position regarding the two-state solution, and that it had drawn its border abutting Israel [in the] north and south of the West Bank, although the Jordan Valley is the natural border [of Jordan] with Palestine, and not with Israel.”

Kuttab added that King Abdullah II was unhappy with Netanyahu, as the latter had abandoned the peace process by emboldening settlers and supporting US decisions on Jerusalem.

“He welcomed the move of the [American] embassy [to Jerusalem] and encouraged other [nations] to move [their embassies], despite the fact that the future of Jerusalem is reserved for final-status talks, and the [1994] Jordanian peace treaty [with Israel] reserves a special role for Jordan” regarding Muslim holy sites in the city, he said.

Abdullah Swalha, founder and director of the Center for Israel Studies in Amman, told The Media Line that Jordan’s position would be finalized in consultation with Egypt in an effort to forge a unified Arab position.

“If it succeeds, it will be good for Jordan because [Amman] wants to adopt a collective position through Arab cooperation to avoid bearing the cost of opposing this deal alone,” he explained.

Swalha noted that the US peace plan had been changed from its original parameters.

“Adding things and then deleting things… Jordan could have accepted it [in its earlier form], but it became more difficult,” he said.

He added that Amman would neither reject the deal completely nor accept it. Instead, it would deal with the plan’s positive elements and at the same time work to change some of its problematic terms, such as annexing the Jordan Valley.

“Jordan will work to replace that with specific security arrangements to be agreed upon. The term ‘annexation’ is difficult in the Jordanian culture and for the Jordanian decision-maker,” Swalha said.

Ayman Abd Al Majeed, an Egyptian writer and head of the political section at the Rose al-Yusuf daily newspaper in Cairo, stressed to The Media Line that what is known so far is based on unreliable leaks although the Arab position remains consistent: “achieving a Palestinians state on the borders of 1967, with East Jerusalem as its capital. Lacking that, the fantasies and conspiracies will fail.”

Mohammed Al Sabban, a Saudi writer and former senior adviser to the Saudi petroleum minister, told The Media Line that Riyadh’s position has never changed, and would never change.

“It’s part of the unified Arab position, which rejects any deviation from the [2002] Arab [peace] initiative based on the two-state solution, with the establishment of a Palestinian state with Jerusalem as its capital,” he said.