RAMALLAH, West Bank — The Palestinian leader, Mahmoud Abbas, on Sunday dismissed a new effort by the Trump administration to encourage investment of more... 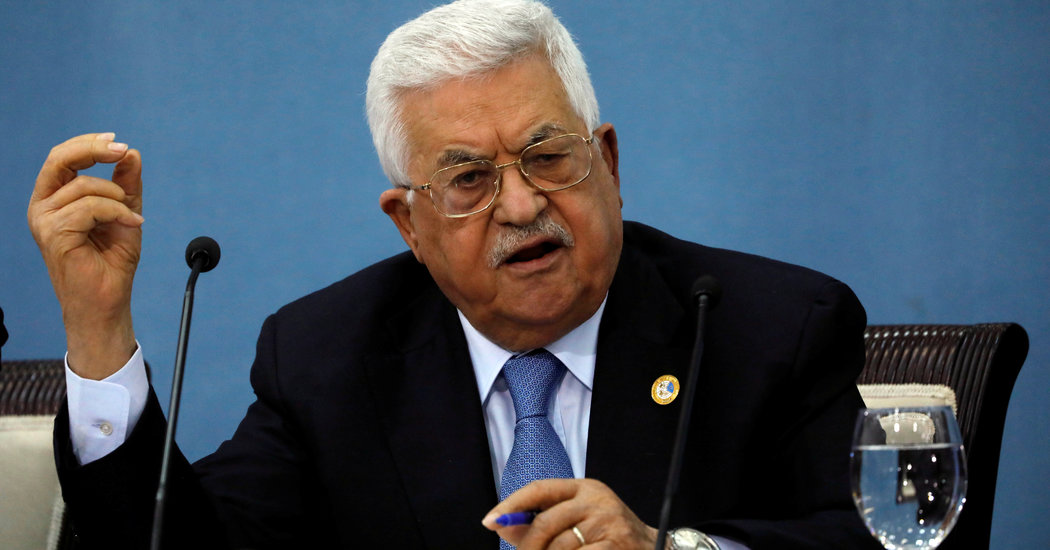 RAMALLAH, West Bank — The Palestinian leader, Mahmoud Abbas, on Sunday dismissed a new effort by the Trump administration to encourage investment of more than $50 billion to jump-start the Palestinian and regional economies in hopes of building a foundation for a future peace.

In a rare meeting with foreign journalists at his headquarters in the West Bank city of Ramallah, Mr. Abbas, the Palestinian Authority president, said the plan, set to be kicked off this week at a conference in Bahrain, was ill-begotten and bound to fail.

The Trump administration released its economic plan over the weekend to set the stage for a workshop on Tuesday and Wednesday. The Palestinian leadership called for a boycott of the conference, and Palestinian officials will not attend. Most Palestinian businesspeople who were invited appear to be staying away.

“We need the money and, really, we need assistance,” said Mr. Abbas, who presides over a divided Palestinian polity that has long depended on the largess of donor nations and that is in perpetual financial crisis. “But before everything, there is a political solution.”

“Then we can say, ‘Dear world, come assist us, we are ready to receive assistance,’” he said.

For the Palestinians to re-engage in peace negotiations, Mr. Abbas said, the Trump administration would have to reverse its position on Jerusalem after recognizing it as Israel’s capital in late 2017 and ordering the relocation of the American Embassy from Tel Aviv to the hotly contested holy city.

The administration has said the embassy move will not have any bearing on the final borders of Jerusalem, but it is unlikely to cancel its recognition.

The United States would also have to recognize a two-state solution — meaning the establishment of an independent Palestinian state alongside Israel —as the basis for ending the conflict, and to respect international resolutions, Mr. Abbas said.

In the meantime, he said, measures the administration has taken against the Palestinians — including cutting aid and funding of the United Nations agency helping Palestinian refugees of the 1948 war and their descendants — have “closed any possible door for a political solution.”

Palestinian officials cut off communications with the Trump administration about 18 months ago.

Given the United States’ positions on many outstanding issues, like the fate of Jerusalem, refugees and Israeli settlements in the occupied territories, Mr. Abbas said, “There is nothing left to talk about.”

Mr. Abbas appeared in fine spirits and almost satisfied with the unenthusiastic response the plan had received so far from many in the region, and with the relatively low level of the Arab delegations planning to attend the workshop in Bahrain.

He poured scorn on ideas for projects included in the plan, which the authors acknowledged were mainly recycled from previous peace efforts and reports by international organizations like the World Bank and the International Monetary Fund.

Referring to the proposal for a rail link between the West Bank and the Gaza Strip, Mr. Abbas said Israel had already agreed to a safe corridor connecting the two Palestinian territories as part of the Oslo accords in the 1990s.

With the Trump administration hoping to raise much of the money from Persian Gulf states without pledging its own funds, Mr. Abbas asked why the Americans should act as financial mediator, saying the Palestinians could raise money from wealthy Arab countries just as well themselves.

The only element of cooperation that remains between the Palestinians and the United States, Mr. Abbas said, is security coordination with the C.I.A.

“We are not ashamed to say it,” he said.

The reason is the Palestinians’ desire to help combat terrorism in the world, he said, adding, “We preserved these agreements because terrorism is an enemy of humanity.”

Israel says the security coordination helps Mr. Abbas counter internal rivals like Hamas, the Islamic militant group that controls Gaza, and keeps him in power in Palestinian areas of the West Bank.

Mr. Abbas claimed not to be too worried about the participation of Arab allies like Jordan and Egypt in the Bahrain workshop. Israel, he said, hopes to reverse the traditional parameters of peacemaking by achieving normal relations with Arab states first and then forgetting about the Palestinians.

But he added, “We heard from all the Arab states that there will not be normalization with Israel before there is a political solution between the Palestinians and Israel.”

The Trump administration has acknowledged that the economic plan cannot work without a political deal. But it has not revealed the long-awaited political component of its plan.

Mr. Abbas refused to say whether he had read the document laying out the economic part of the plan.

“I am waiting for you to tell me what you think about it,” he told reporters.