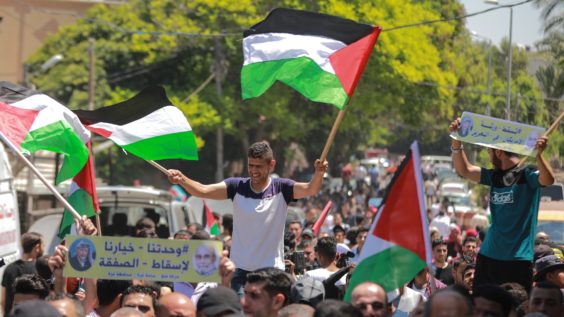 On Sunday morning, Palestinian flags fluttered on the sides of Israeli roads in the West Bank, including the Route 60 bypass that connects Jerusalem and the Gush Etzion Jewish communities south of Bethlehem, as well as several roads connecting Palestinian cities.

The roads are all in areas that are supposed to be under complete Israeli control according to the second round of the Oslo Accords, signed with the Palestinians in the 1990s. The flags were placed there by Regavim, a right-wing Israeli NGO, to call attention to what the group claims are attempts by the Palestinian Authority (PA) to take over the areas.

Regavim, whose motto is “Protecting Israel’s resources, restoring Israeli sovereignty,” monitors Palestinian construction in the West Bank. In an English-language Facebook post taking responsibility for the flags, the group said: “Good morning, sunshine??! This morning’s stunt by Regavim was an in-your-face challenge to [the Knesset] to enforce the law and halt the de facto creation of a terrorist state in the heart of Israel.”

According to the 1995 Oslo II Accords, the West Bank was divided into three sections: Area A, where the PA has full civilian and security control, with Israeli security patrolling the borders; Area B, where the PA controls civil administration and shares security responsibilities with the Israeli Defense Force (IDF); and Area C, where Israel has control of both civil and security administration.

“The flags we put up this morning will not determine the future of Yehuda and Shomron [Judea and Samaria, the biblical term for the two major areas of the West Bank], but tens of thousands of illegal structures built in the past decade, and tens of thousands of dunams [of land] that have been seized by the Palestinian Authority with the support of European countries, most certainly will,” Regavim said in a separate English-language post on Facebook. “The time has come for the government to take action… not with words, but with real on-the-ground deeds. It’s not too late, but time is running out.”

Kamal Safakah, head of projects at the Colonization and Wall Resistance Commission, a quasi-governmental watchdog group set up by the Palestinians to monitor Israeli construction in the West Bank, told The Media Line that the move was a way of provoking the Israeli government, as well as the IDF, saying it gave the latter an excuse to increase actions against Palestinian villages and citizens in areas around what he termed “illegal settlements” in the West Bank.

“It’s a fake message that the Israeli soldiers are not doing their job properly,” he said.

Safakah added that the reality on the ground reflected the opposite of what Israeli settlers claim.

“The area there is a huge settlement complex under full Israeli control,” he said.

He said he believed the campaign was aimed at inciting settlers and other Israeli individuals to increase attacks against Palestinians.

“The Palestinian villages and citizens are under attack by the Israeli settlers in the West Bank on a daily basis,” he said. “This campaign will make the situation even worse.”

Gad Shimron, an Israeli journalist and political analyst, explained to The Media Line that raising the Palestinian flags in the West Bank was simply a public relations move by Regavim.

“At least they are protesting and not shooting,” Shimron continued, explaining that it was an attempt by the group to capture headlines. “They are creating chaos, that’s all.”

Shimron said Regavim was well connected with the Israeli government and that it just needed some attention, “maybe to increase the movement’s relationships and establish new ones.”

In February, the Palestinian Prime Minister’s Office stated in a press release that 2018 had seen a dramatic increase in settler attacks, which had also become more organized. The report said the “Price Tag” group – which, it said, had carried out 862 vandalism attacks against Palestinian property in the West Bank over the past year – was just one example.

The press release pointed out that 73 percent of the settler attacks were carried out in the Jerusalem, Nablus, and Hebron areas.

But back to the flags. As Israelis decried the stunt before Regavim took credit, the move elicited admiration from Palestinians – who were able to see their flag flying on West Bank roads at a time when they are often prevented from using them.