Palestinian Farmers Not In Favor of Israeli Olives

Growers, activists rally against official decision by PA ministry on imports from Israel Palestinian farmers have reacted with anger and resentment over a decision... 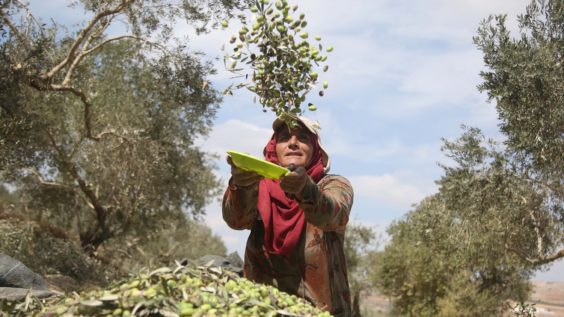 Growers, activists rally against official decision by PA ministry on imports from Israel

Palestinian farmers have reacted with anger and resentment over a decision by the Palestinian Authority’s Ministry of Agriculture to import 3,600 tons of olives from Israel, Jordan and Egypt.

According to a statement by the ministry, 2,000 tons of the olives will come from Israel, which prompted activists and farmers to protest outside the ministry in Ramallah last week under the cry “Our olives are enough!” and to call the decision “a stab in the back of every farmer.”

“We protest today demanding that the ministry reverse its decision,” Fareed Tom Allah, a Palestinian farmer, told The Media Line. “In principle, we expect our government to boycott all Israeli products, period, to protect Palestinian farmers as well as their products.”

Tom Allah claimed that “the Israeli government confiscates Palestinian farmland on a daily basis, and thus the ministry’s decision facilitates Palestinians buying the products of their stolen lands – which doesn’t make any sense.”

He urged the ministry to “protect the lands of the farmers, as well as pressure local companies and factories to prioritize Palestinian products over imported goods.”

He continued by saying that “this year’s harvest is the best in 14 years; we expect to produce 67 tons, which is twice as much as last year’s amount of olive oil. Because the Palestinian market can absorb only between 14 and 15 tons of this, the government should work to find farmers an alternative market and not allow factories to import olives, which will worsen our situation.”

Abdallah Lahlouh, the deputy agriculture minister, told The Media Line that the decision “has been misunderstood.”

“It has nothing to do with farmers’ olive oil, which is considered a basic Palestinian commodity,” he said. “The ministry absolutely forbids the import not only of olive oil that Palestinian families make their living from, but any product that Palestinian farmers produce, this in an effort to protect the farmers.”

He cited the needs of Palestinian pickle factories to import a specific type of irrigated olive that is not available in the West Bank due to a lack of water sources, adding that protecting Palestinian farmers was at the “top of the ministry’s priorities as part of the government’s plan to disengage from the Israeli market.”

The ministry, he said, was “constantly looking for alternative water sources to enable Palestinian farmers to grow all kinds of olives.” In the meantime, it had organized “a committee to allow those companies that need the irrigated olives to import only the amount their factories need.”

The Palestinian Farmers Union said it was concerned about the timing of the ministry’s decision and feared that Palestinian traders might exploit it to smuggle in additional quantities of different kinds of olives.

“The timing of the decision, which intersects with the beginning of the olive harvest season in the Palestinian territories, as well as how the decision was made, have caused anger among the farmers,” Abbas Melhem, the union’s director, told The Media Line.

“The farmers’ concerns are legitimate, especially because this year’s crop is expected to be plentiful,” he noted.

Melhem exhibited, however, a general understanding for the ministry’s move.

“Palestinian factories end up exporting their products abroad, where about 1,000 tons return to Israel as goods,” he said, “which doesn’t harm the farmers’ share of the market.”

He cited, however, an “urgent need” for ministerial control mechanisms.

“The last thing we need is to dump the Palestinian market with smuggled olives from Israel, to be produced as oil later, which would greatly harm the farmers and our national product season in Palestine,” he said. “It happened last year.”

Last week on his Facebook page, PA Prime Minister Mohammad Shtayyeh posted that “the Palestinian national product is a priority, and the government will take all needed measures to protect it. Our policy is clear that we will not allow damage to our product, including olives and oil.”

He added that the decision by the ministry was nothing new and was in force in previous years.

“We will deal with this matter in a way that doesn’t harm the interests of the farms or factories. At the same time, we will achieve our goal of strengthening our national product,” he wrote.