Palestinian Cultural Days opened yesterday in Doha, attended by dozens of ambassadors, diplomats and members of the public. The ceremony began with the national... 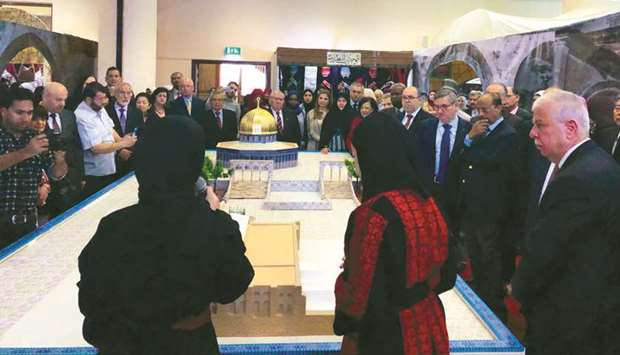 Palestinian Cultural Days opened yesterday in Doha, attended by dozens of ambassadors, diplomats and members of the public.
The ceremony began with the national anthems of Qatar and Palestine being played. On display was a large model of Al Aqsa Mosque that also had replicas of its gates and streets.

Ambassador of Palestine to Qatar Mounir Abdullah Ghanam said that the event was prepared, designed and carried out by Palestinian school staffers, teachers and students. He added that the message was to highlight Al Quds Arab identity and to stress that Al Quds is the capital of Palestine.
He added that another message was to show that Palestinians remain connected to their land.

Responding to a Qatar News Agency (QNA) question on the Qatari support to the Palestinian cause, the ambassador said that the school in Qatar expresses its thanks to Qatar’s Amir, government, and the people for their constant support of the Palestinians’ right of an independent state with Al Quds as its capital.

For his part, deputy ambassador of Palestine in Doha and the supervisor of Palestinian schools in the country Dr Yehia Zakaria El Agha said in a statement that Palestinian Days is the most important cultural event related to Palestine that takes place in Qatar.

He said that visitors to the large replica of Al Quds will see all its famous 11 gates and added that the model was an implementation of what the students learned in their class.

He also noted that the paintings of the students were all related to Al Quds. For her part, Secretary-General of Qatar National Commission for Education, Culture and Science (QNCECS) Dr Hamda Hassan al-Sulaiti stressed on the importance of celebrating Palestinian heritage, praising the organisers of the event for their ability to recreate Al Quds with its streets and traditions.

Al-Sulaiti added that the commission has a special interest in the Palestinian cause, given it is the central issue of all Arab and Muslim organisations.