Palestinian Authority President Mahmoud Abbas met with the Egyptian security delegation, headed by Major-General Ayman Badee, in Ramallah after the delegation concluded a round... 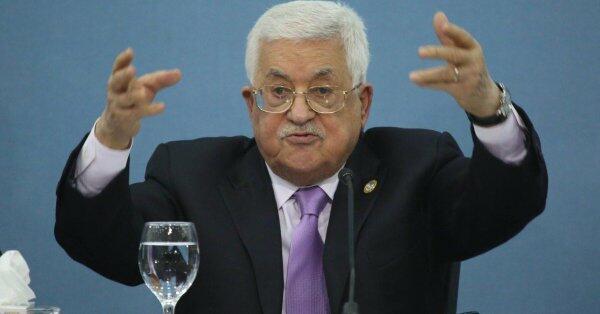 Palestinian Authority President Mahmoud Abbas met with the Egyptian security delegation, headed by Major-General Ayman Badee, in Ramallah after the delegation concluded a round of talks with Hamas leadership.

He reiterated the importance of Egypt’s efforts in consolidating the Gaza-Israel ceasefire and bringing about intra-Palestinian national reconciliation, stressing the joint Arab efforts to protect the unified Arab position regarding the Arab Peace Initiative, which has been underlined in various Arab summits.

Badee briefed the President on the Egyptian move regarding the situation and developments in the Arab arena, in light of the current challenges and risks, and all that concerns the truce with Israel and the reconciliation process.

Badee stressed the Egyptian stance on the Palestinian-Israeli conflict, adding that the peace process should be in line with the two-state solution, international legitimacy and the Arab Peace Initiative aimed at ending the Israeli occupation and creating a Palestinian state on the 1967 borders with East Jerusalem as its capital.

Sources said that Egypt had offered the handing over of the Gaza Strip, then calling for a national unity government and elections.

Haniyeh’s office said in a statement that during the meeting, the two sides continued discussing the bilateral relations and common issues, including the latest developments regarding the Palestinian unity and developments on understandings with the enemy.

Hamas noted that the leadership was willing to achieve national unity, discussing the dangers targeting the Palestinian cause and the region. It also reiterated the importance of having a Palestinian position stemming from the national consensus on the strategy of facing risks, namely the “deal of the century”.

During the meeting, the leadership presented a detailed explanation of Israeli violations against the Gaza Strip and its slow implementation of the understandings, stressing that the occupation must understand that the resistance in Gaza wants to break the siege on Gaza.

Fatah wants comprehensive empowerment in the Strip, including the security forces, the judiciary, land authority, tax collection and crossings, which are rejected by Hamas.

Hamas wants to lift off the sanctions and secure full salary payment of its military personnel. The movement also calls for the formation of a new government that includes all factions and independent parties. The government should be tasked with finding solutions to the problems in the Strip, foremost issues of the health and electricity sectors.

It also wants ensuring that security issues are resolved without any exclusion of Hamas security leadership, as well as any of its employees, and integrate them fully within the framework of a full security institution operating according to a constant national doctrine.