Palestine on Top of Mount Everest

Following six days and 100 kilometers of walking and climbing mountains, 27 Palestinian men and women reached the base of Mount Everest at a... 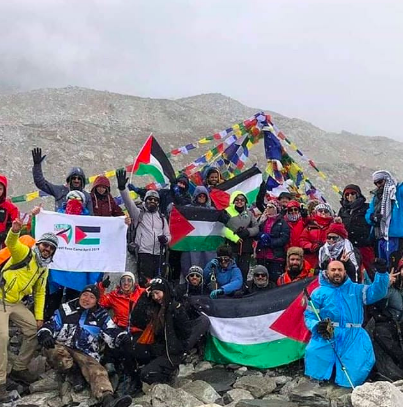 Following six days and 100 kilometers of walking and climbing mountains, 27 Palestinian men and women reached the base of Mount Everest at a height of 5,400 meters above sea level, on Wednesday.

Climb for Palestine, the organizers of the trip, posted on its Facebook page, “We are 12 women and 16 men from Palestine. Twenty seven of us have succeeded in reaching Mount Everest base at a height of 5,400 meters above the sea level.”

The group added, “We raised the flag of Palestine and slogans of solidarity with the prisoners and Jerusalem, which was the least we could do to our Palestinian cause.”

The group started on their journey on April 19th, as part of a mountain sports adventure and with a goal to place Palestine among the countries that have climbed the mountain, located in the Himalayas, on the borders between China and Nepal.

The peak of Mount Everest is 8,848 meters above sea level, making it the world’s highest mountain and reaching it is more challenging. Despite Mount Everest being dangerous, it attracts many climbers, some of them highly experienced mountaineers.

Although more than 4,000 individuals have scaled the summit since 1953, more than 296 have died trying to reach the peak.