Reuters/AFP/Islamabad/Muzaffarabad/Srinagar Tensions between India and Pakistan over Kashmir have the potential to blow up into a regional crisis, and it is the right time... 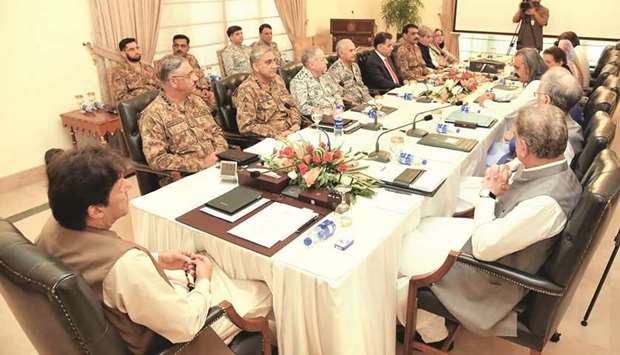 Tensions between India and Pakistan over Kashmir have the potential to blow up into a regional crisis, and it is the right time for US President Donald Trump to mediate, Prime Minister Imran Khan said yesterday.
His comments come a day after Pakistan accused India of using illegal cluster bombs, killing two civilians and wounding 11, in the disputed Kashmir region.
India denied it had used such weapons.
“President Trump offered to mediate on Kashmir. This is the time to do so as situation deteriorates there and along the LOC (line of control) with new aggressive actions being taken by Indian occupation forces,” Khan said on Twitter, referring to the heavily militarised de facto border that divides the two parts of Kashmir between India and Pakistan. “This has the potential to blow up into a regional crisis.”
India’s foreign affairs ministry and the White House did not immediately respond to a request for comment on Khan’s remarks.
In July, Trump told reporters that Indian Prime Minister Narendra Modi had asked him during a meeting in Japan if he would like to be a mediator on Kashmir.
India denied Modi ever asked for any mediation.
India has long rejected any suggestion of third-party involvement in tackling Kashmir and, reacting to Trump’s offer last month, said it would deal with Pakistan only bilaterally.
Trump last week reiterated his offer, saying that he would intervene if asked, and “it’s really up to Prime Minister Modi”.
Muslim-majority Kashmir, claimed by both India and Pakistan, has long been a bone of contention between the two.
Tensions flared after a vehicle laden with explosives rammed into an Indian police convoy on February 14, killing 40 paramilitary police, and leading to aerial clashes between the two nations.
India accuses Pakistan of funding armed militants, as well as separatist groups in India’s portion of the region.
Islamabad denies the Indian accusation, saying that it provides only diplomatic and moral support to a separatist movement.
Tensions have escalated particularly since Friday, when local Indian officials in Kashmir issued an alert over possible militant attacks by Pakistan-based groups.
Pakistan has rejected those assertions, but thousands of Indian tourists, pilgrims and workers left the region in panic.
Pakistan on Saturday also rejected India’s claims that it had killed at least five Pakistan-based militants who tried to attack its forces near the border.
Yesterday, Kashmir remained on high alert with Indian para-military forces deployed across major towns.
One senior local official said a curfew was likely next week.
However, the city police chief in Srinagar, the state’s main city, told Reuters that he had no knowledge of a curfew.
Hospitals were on alert, with staff told not to leave the city without permission, officials said.
The local government said on Friday it had intelligence about militant attacks and called off a major Hindu pilgrimage, asking pilgrims and tourists to return home.
Kashmir touts itself as a “Paradise on Earth”, with its Dal Lake, famous houseboats and mountains among major attractions.
Britain and Germany have in advisories discouraged their citizens from visiting, but around 160 foreign tourists arrived on Saturday, one official said.
Some were not worried.
“Why should we be scared? It is a nice place and people are very helpful,” said Molly, a Swiss tourist.
Nevertheless, tourism is bound to suffer as tensions rise.
“All of a sudden tourists left … I have no work for the last two days. We are up for bad times,” said Abdul Rashid Shah, 53, a boatman at the Dal Lake.
On the Pakistani side, the authorities asked villagers along the de facto Kashmir border to remain alert.
The advisory came yesterday after Pakistani officials evacuated more than 50 Chinese nationals working on a dam being constructed in Pakistani Kashmir along the confluence of the Neelum and Jhelum rivers.
Authorities moved the workers last Tuesday after the firing killed four civilians – including a four-year-old boy – and critically injured 11 others, authorities said.
Authorities asked the villagers through social media and WhatsApp messages to remain alert and not to approach any suspicious object as the “enemy was using toy bombs, mortar shells and artillery”.
Local authorities later took a group of reporters to the Noseri area, on the LOC where Badr Munir, a senior government official, briefed them on the escalation at the de facto border.
“Four people have been killed and 11 other wounded by cluster bombs in two different incidents,” Munir said.
An AFP reporter at the scene saw that the Noseri Bazaar appeared deserted, with shops closed and less traffic than usual on the roads.
Authorities also showed two unexploded cluster bombs to reporters.
The site was cordoned off by police to prevent people from getting closer to avoid any further damage.
Munir said a group of experts along with police was searching for more unexploded bombs.
Mohamed Siddique, father of a cluster bomb victim in the area, told reporters that his children were playing outside when they found the unexploded weapon and brought that home.
“It exploded as they were playing with it. My son Ayan Ahmad died and 11 people were wounded in the incident,” Siddique said.
Cluster munitions can contain dozens of smaller bomblets that disperse over large areas, often continuing to kill and maim civilians long after they are dropped.
Their use is banned under an international treaty, which neither India nor Pakistan has signed on to.
Kashmir is ruled in part but claimed in full by both countries, who have fought two of their three wars since independence in 1947 over it.