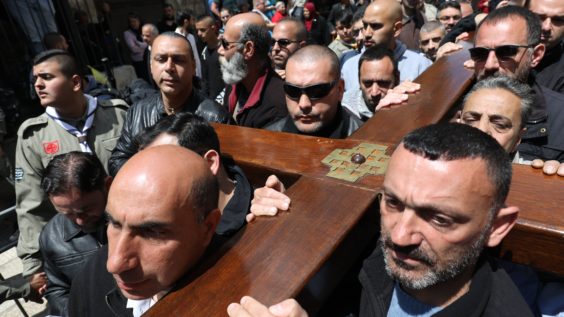 Gunmen aligned with Fatah said to have demanded tax on non-Muslims, leading to rioting in village near Ramallah

The incident took place in Jifna, a predominantly Christian village near Ramallah in the West Bank with a population of about 2,000 people.

Residents accuse the gunmen of storming the village and insulting them. The dispute allegedly started when a woman accused the son of an influential Palestinian official of assaulting her and her children as she drove into her village.

Without mentioning the incident specifically, Shtayyeh said in Ramallah during celebrations marking the Holy Fire and Easter holidays: “Christians are not just a community in Palestine, they are a major component of our people and we do not allow the use of these vocabularies.”

Villagers say the attackers demanded that they pay a Jizya, a long-unused tax imposed on non-Muslim subjects living under Islamic rule. This infuriated them, and they said the situation was out of control for hours.

The Media Line spoke with an eyewitness who identified himself only as Joe for fear of reprisals, and who said the attack had come as a shock to him and the rest of the village.

“I was born here, I grew up here and I’m a full citizen like everyone,” Joe said. He added that the Palestinian Authority police showed up only three hours after they had been called.

A statement issued by Jifna’s residents described the PA security forces’ late arrival as a “failure” to protect its citizens. They said the gunmen’s behavior resembled that of gangs and mobs.

“The village became a scene for anarchy and lawlessness,” they said in the statement.

Another local man who witnessed what happened and asked not to be identified at all said the group “hurled rocks and fired in the air.”

Palestinian officials said the security situation in areas under PA jurisdiction was under control and that incidents of this type are the exception. PA police vehemently denied accusations that the security situation was slipping out of control, adding that they treat every incident “seriously” and “without favoritism.”

The governor of Ramallah, Leila Ghanam, promised a swift investigation, saying the suspects would be brought to justice.

“We will not allow anyone to meddle with our social and national fabric,” she said.

The family of the man accused of starting the incident issued its own statement denying that there had been insults or demands on Christians to pay a Jizya or any other tax.

A statement issued on Monday by the Jifna village council thanked Shtayyeh and the PA security forces for taking the necessary steps to “redress the repercussions of the assault on the village and to realize their rights,” adding that they had agreed to hold a reconciliation meeting on Monday evening at the village church.

Palestinian media reported that the gunmen were Fatah activists from the nearby Al-Amari refugee camp.

Incidents like these are rare in the West Bank.