Over a Thousand Likely Infected by Wuhan Virus in China

The latest outbreak centred around a seafood market in the central Chinese city of Wuhan The number of people infected by a...

The number of people infected by a mystery SARS-like virus that has killed two people in China is likely hundreds more than officially reported, researchers have said on Friday.

The news comes as Chinese health authorities said on Saturday that they have discovered four more cases of pneumonia following an outbreak of what is believed to be a new coronavirus strain.

The four individuals were diagnosed with pneumonia on Thursday and are in stable condition, the Wuhan Municipal Health Commission said in a statement published shortly after midnight. Saturday’s statement marked the first confirmation.

Chinese authorities previously said that the virus had hit at least 41 people in the country, with the outbreak centred around a seafood market in the central city of Wuhan.

But a paper published on Friday by scientists with the MRC Centre for Global Infectious Disease Analysis at Imperial College in London said the number of those affected in the city was likely to be well over a thousand.

The scientists at the centre – which advises bodies including the World Health Organization – said they estimated a “total of 1,723 cases” in Wuhan would have been infected as of January 12.

The researchers took the number of cases reported outside China so far – two in Thailand and one in Japan – to infer how many were likely infected in the city, based on international flight traffic data from Wuhan’s airport.

“For Wuhan to have exported three cases to other countries would imply there would have to be many more cases than have been reported,” Professor Neil Ferguson, one of the authors of the report, told the BBC.

“I am substantially more concerned than I was a week ago,” he said, adding, however, that it was “too early to be alarmist”.

“People should be considering the possibility of substantial human-to-human transmission more seriously than they have so far,” he added, saying it was “unlikely” that animal exposure was the main source of infection.

Two people are known to have been killed by the virus, a pathogen from the same family as the deadly SARS virus – even as health authorities around the world sought to assure the public that the overall risk of infection remained low.

Authorities in Hong Kong have stepped up detection measures, including rigorous temperature checkpoints for inbound travellers from the Chinese mainland.

The US said from Friday it would begin screening flights arriving from Wuhan at San Francisco airport and New York’s JFK – which both receive direct flights – as well as Los Angeles, where many flights connect. 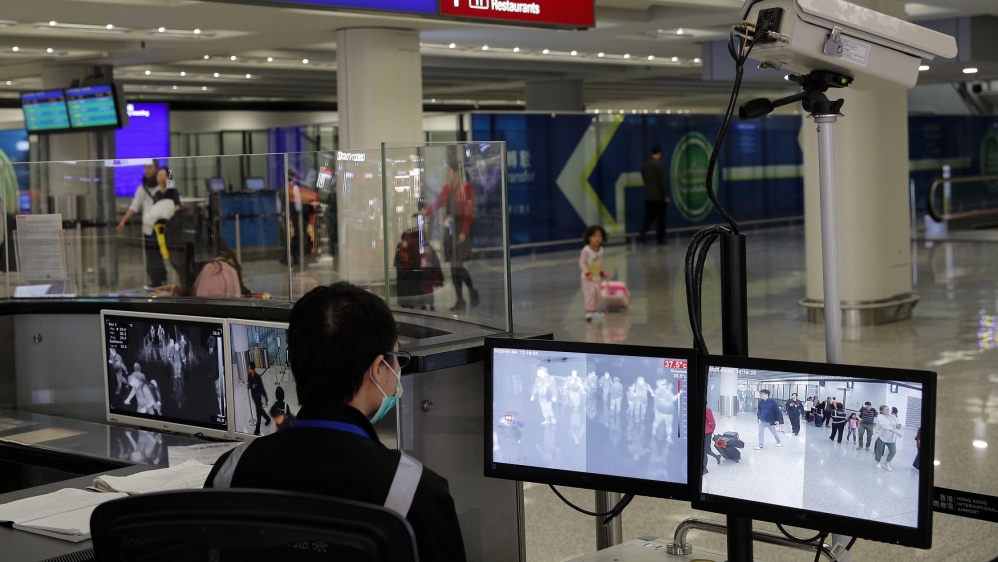 The latest outbreak comes ahead of the Lunar New Year holidays, when many of China’s 1.4 billion people will be travelling to their home towns or abroad [File: Andy Wong/AP]

So far, health officials do not consider the new virus from China to be as lethal as SARS, but the investigation is evolving and much is still not known about whether the virus can spread easily from person to person.

“This is the stage of the investigation where we need to proceed cautiously and be prepared for any eventuality,” said Dr Nancy Messonnier, an expert in respiratory diseases at the Centers for Disease Control and Prevention (CDC) in the US.

SARS originated in southern China in 2002 and infected more than 8,000 people in 37 countries before it was brought under control.

Nearly 800 people died worldwide. China was accused of covering up the case.

The latest outbreak comes ahead of the Lunar New Year holidays when many of China’s 1.4 billion people will be travelling to their home towns or abroad.