Notre Dame and The Move to Help People

THE entire world was shaken by grief and pain when fire engulfed one of the most beautiful and oldest churches in the world —... 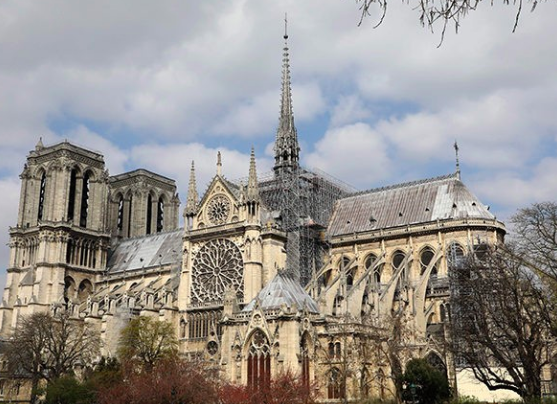 THE entire world was shaken by grief and pain when fire engulfed one of the most beautiful and oldest churches in the world — Cathedral of Notre-Dame de Paris (Our Lady of Paris). The entire world witnessed the fire, which continued for hours, through live television coverage.

Majority of the initial investigations suggests that the fire was an accident, considering the cathedral was under renovation.  This, in itself, lessened the pain. Everyone resorted to the phrase commonly used by Muslims: “Allah disposes, He does whatever He wishes.”  If the fire was intentional, several groups and parties would have been put on the line of accusations, such as the ‘Yellow Vest’ group and extremist Muslims, etc.

What was amazing and civilized about the incident was that a few hours after the fire started until it was extinguished, news on donations of hundreds of millions from individuals, French and foreign companies were the trending topics.

Two days after the fire, more than 900 million euros were pledged. It extended to generous donations from every corner of the globe for the reconstruction of that structure of civilization estimated to have lasted for more than 856 years, to the lofty ‘Quartier Latin’ area — ancient and famous for its shops, restaurants and cafés.

I was very glad when I, together with scores of those who have conscience and emotion, heard this news. We have seen that the world is fine and will continue so, as long as it is being ruled by good people. It is unfortunate that we lack such feelings in this part of the world.

In the last decade, we lost precious antiques and monuments — more than 10,000; and ancient buildings in Iraq, Syria and other places where destruction from outside and within continues. Yet, such incident did not move drums in the ears of one of our richest people or organizations which are called charity due to selective categories.

The touching glimpse of humanity which made me believe that the world and mankind, primarily us in the Gulf, are alright; and that we still have the elegant touch of humanity, is the decision of the Kuwaiti government, through Kuwait Red Crescent Society, to quickly send humanitarian aid to the victims of floods in various provinces in the Islamic Republic of Iran.

The floods occurred in towns inhabited by Iranian Arabs or Ahwaz region. These people are our brothers in humanity, religion and pan-Arabism.

Everyone in neighboring Iran applauded and praised Kuwait Red Crescent Society for its humanitarian activities — its officials and citizens. This is not a strange gesture by Kuwait, its people and its humanitarian leader. Aid was dispatched upon his order.

What made me happier was the unforgettable humanitarian glimpse concerning the United Arab Emirates Red Crescent Society which dispatched a plane carrying 95 tons of relief to Tehran to help the flood victims.

This aid came within the Saudi-United Arab Emirates initiative to alleviate the suffering of Iranians affected by the floods. This initiative is considered a paradigm shift in the efforts of both sides of the humanitarian spectrum (Al-Qabas daily April 18, 2019).

I was really touched by the humanitarian initiative of two countries which are not in good terms with Iran as they managed to overlook their differences in order to alleviate human suffering in the neighboring country by offering aid.

We have nothing more to say to these three countries — Kuwait, Saudi Arabia and United Arab Emirates and their esteemed leaders — other than ‘Thank you and may Almighty Allah grant you the best rewards on Earth and in the Hereafter.’

Ali Ahmed Al-Baghli is an an ex-Oil Minister