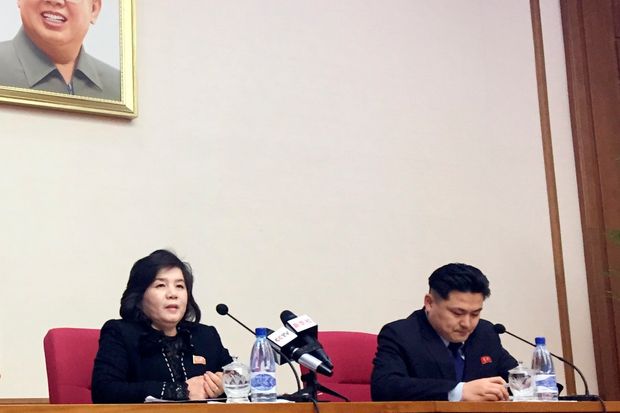 A senior North Korean official warned that the country may suspend negotiations with the U.S. over its nuclear arsenal, in the latest sign of pressure on Washington after the two sides failed to reach an agreement at last month’s U.S.-North Korea summit.

Ms. Choe, one of Pyongyang’s top diplomats, refrained from directly criticizing Mr. Trump, but said the U.S. approach to the negotiations was uncompromising, and the North didn’t rule out the possibility that it would resume missiles testing. Ms. Choe said Washington should offer concessions because Pyongyang had refrained from testing nuclear weapons since November 2017.

The statement revives concerns over Mr. Kim’s commitment to denuclearization, North Korea watchers said, and suggests Pyongyang could be slowly posturing to exit talks with the U.S., laying the blame on Washington for the negotiations’ failure.

“I want to make it clear that the gangster-like stand of the U.S. will eventually put the situation in danger,” said Ms. Choe, according to the AP. “We have neither the intention to compromise with the U.S. in any form, nor much less the desire or plan to conduct this kind of negotiation.”

The U.S. Embassy in Seoul referred questions on the matter to the State Department, which wasn’t immediately available to comment.

Mr. Trump and Mr. Kim met for their second summit last month in Hanoi, but failed to agree on how to proceed with dismantling North Korea’s nuclear-weapons program. U.S. officials accused North Korea of demanding sanctions relief amounting to billions of dollars without providing sufficient steps toward denuclearization. North Korea has maintained its demands were reasonable, as it requested relief from only those sanctions affecting its civilian economy in exchange for dismantling its main nuclear facility.

In the days following the summit, U.S. officials said they were seeking a broad deal on the complete dismantlement of North Korea’s nuclear-weapons program in return for U.S. assistance in building up its sanctions-battered economy.

“We are not going to do denuclearization incrementally,” said Stephen Biegun, the U.S. Special Envoy for North Korea Affairs, while at a conference hosted by the Carnegie Endowment for International Peace in Washington this week. 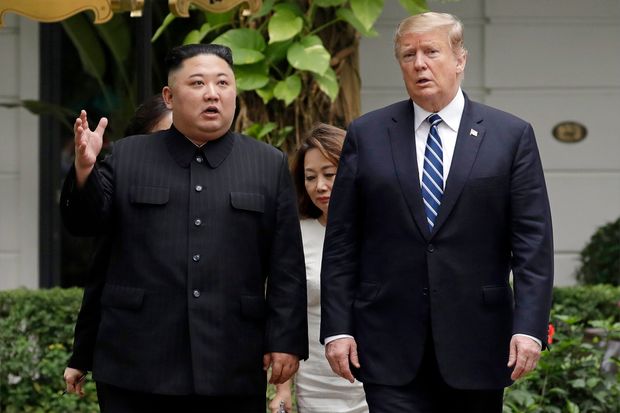 “Our goal, our objective is the final fully verified denuclearization of North Korea,” he said. Mr. Biegun added that Mr. Trump had asked Mr. Kim to move fast. “Let’s go for a big proposal here to eliminate these weapons of mass destruction programs.”

North Korea has favored a much slower process, saying the two sides must build trust before it lays down its weapons. Ms. Choe said on Friday the U.S. demands for denuclearization before sanctions relief an “absurd sophism,” according to the AP.

A diplomatic official in Seoul said Ms. Choe’s statements appeared to be a typical North Korea tactic aimed at buying time. “From the beginning I never believed in North Korean denuclearization, so I think it’s just a kind of bluff. It doesn’t mean they’re ready to denuclearize,” he said.

Ms. Choe said recent statements from officials such as Secretary of State Mike Pompeo and national security adviser John Bolton had worsened the diplomatic atmosphere. But she added the chemistry between Messrs. Trump and Kim is “mysteriously wonderful,” according to the AP.

Moon Chung-in, a professor emeritus at Yonsei University in Seoul, said on Tuesday that North Korea had expected step-by-step negotiations to take place at the Hanoi summit, referring to a speech by Mr. Biegun in January in which he said the U.S. was prepared to take parallel steps simultaneously with North Korea toward denuclearization and better relations. “But all of a sudden the U.S. wanted a big deal,” he said.

Nam Sung-wook, a former South Korean intelligence official, and now a professor of North Korea studies at Korea University said Pyongyang appears reluctant to give up its access to Mr. Trump, and is seeking to drive a wedge between him and his advisers.

Write to Andrew Jeong at andrew.jeong@wsj.com