‘No Japan’ Banners Removed in Seoul After Outcry

SEOUL (AFP) – A Seoul district was forced to backtrack within hours of starting to put up more than 1,000 anti-Japan banners in the... 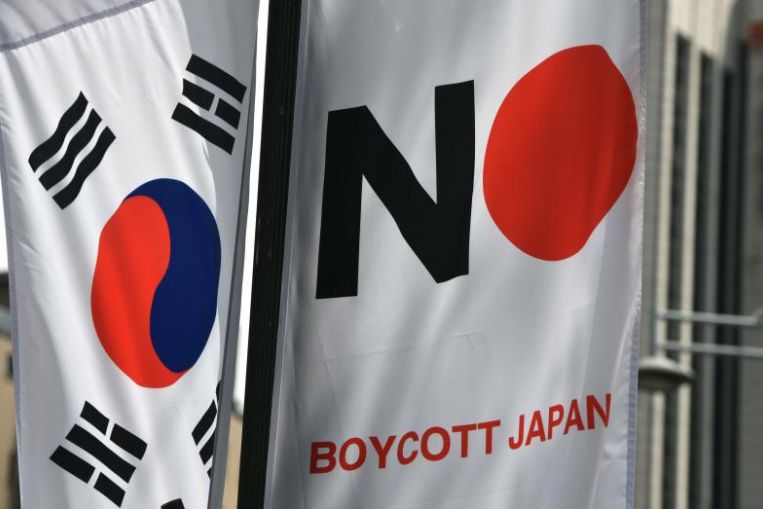 SEOUL (AFP) – A Seoul district was forced to backtrack within hours of starting to put up more than 1,000 anti-Japan banners in the centre of the South Korean capital on Tuesday (Aug 6) as a trade dispute rages between the neighbours.

Local authority workers began hanging the banners from lampposts in Jung-gu, which includes the popular Myeong-dong shopping district and tourist destinations such as the Deoksugung Palace and the Namdaemun Market.

They featured the word “NO”, with the red disc of the Japanese flag as the “O”, and read: “I won’t go (to Japan), I will not buy (Japanese products).”

Tokyo and Seoul on Friday removed each other from their “white lists” of trusted trading partners, following a series of South Korean court rulings ordering Japanese firms to pay for forced labour during World War II.

That sparked fury in the South, where almost seven in 10 people still report negative feelings towards Korea’s former colonial ruler, and led to public boycotts of Japanese goods including cars, beer, clothing and pens.

Analysts say politicians on both sides exploit the issues for domestic purposes and some Seoul residents reacted angrily to the banners, saying they amounted to official peer pressure.

By Tuesday afternoon, around 20,000 South Koreans had signed an online petition against them.

“This boycott should be done on an individual basis, not a government-orchestrated display of anti-Japan sentiment,” wrote one petitioner.

Another added: “Japanese tourists are not our enemies.”

The Jung-gu authorities announced the banners would be taken down and district head Seo Yang-ho apologised in a Facebook post, saying he “humbly accepted criticism that any boycott should remain on citizens’ voluntary basis”.