No Evidence Has Been Found of Chemical Weapons Attack in Syria, US Says

WASHINGTON — The United States has found no evidence so far that President Bashar al-Assad’s forces have again begun using chemical weapons in Syria’s... 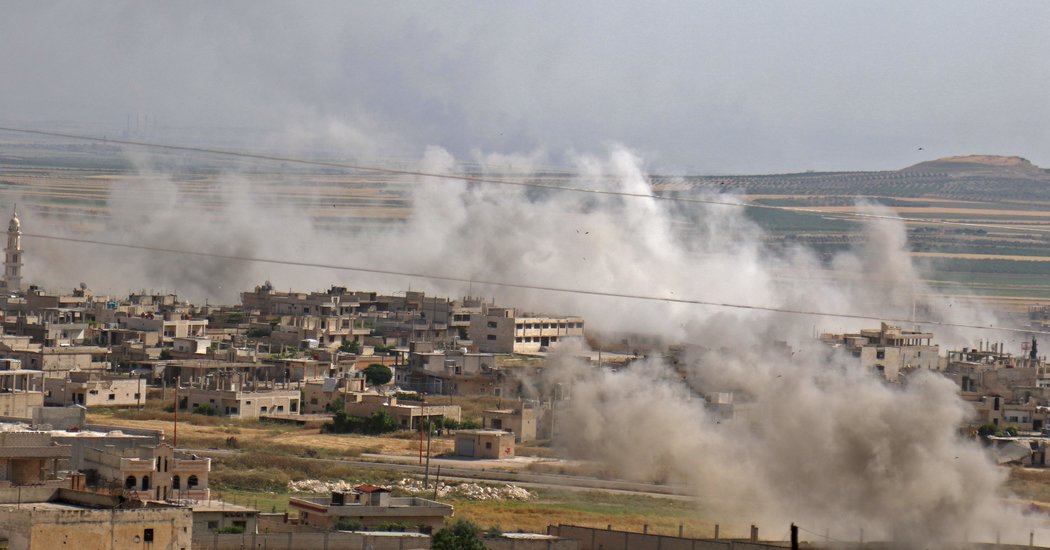 WASHINGTON — The United States has found no evidence so far that President Bashar al-Assad’s forces have again begun using chemical weapons in Syria’s continuing civil war, the top American diplomat for Syria said on Wednesday, a day after the State Department warned of an “alleged chlorine attack” in the country’s northwest.

The diplomat, James F. Jeffrey, the special representative for Syria and a veteran Foreign Service officer, said during a congressional hearing that the Syrian military had been carrying out bombings in the area around Idlib, the last rebel stronghold, that “have been indiscriminate and very vicious.”

“We’re watching this very closely — also the reports of chemical weapons use,” he said. “So far we cannot confirm it, but we are watching it.”

Mr. Jeffrey’s testimony to the House Foreign Affairs Committee appeared to be a carefully worded recalibration of a State Department announcement the previous day on Mr. Assad’s suspected use of chemical weapons.

That earlier statement, made by the department’s new spokeswoman, Morgan Ortagus, said there had been an “alleged chlorine attack” on Sunday in the Idlib area.

“Unfortunately, we continue to see signs that the Assad regime may be renewing its use of chemical weapons,” Ms. Ortagus said in the statement. If Mr. Assad does use such weapons, she said, “our allies will respond quickly and appropriately.”

In the statement, Ms. Ortagus said Mr. Assad’s government and Russia had tried to sow disinformation on the use of chemical weapons by spreading online statements asserting that all such attacks are carried out by groups seeking to undermine the government.

“The facts, however, are clear: The Assad regime itself has conducted almost all verified chemical weapons attacks that have taken place in Syria — a conclusion the United Nations has reached over and over again,” Ms. Ortagus said.

On Wednesday afternoon, Ms. Ortagus told reporters at the State Department that she agreed with Mr. Jeffrey’s comments that morning that raised questions about reports of a new chemical weapons attack by Mr. Assad’s government. She declined to give specific details on what prompted the tough statement from her on Tuesday.

American military officials had said on Tuesday that they were looking into initial reports that Syrian forces had used chemical agents, but expressed surprise over the State Department’s strong statement.

A Pentagon spokesman, Cmdr. Sean Robertson, said on Wednesday that the Pentagon was “carefully reviewing the situation.”

European officials issued statements saying their governments were looking into any recent use of chemical weapons, but had come up with no evidence yet.

“France reaffirms its unchanging position against the use of chemical weapons and for the punishment of those who carry out chemical attacks,” the French Foreign Ministry said in a statement.

The Syrian Observatory for Human Rights, a Britain-based war monitor, said there had been no chemical attack on Sunday.

But in social media chat rooms associated with Hayat Tahrir al-Sham, the rebel group affiliated with Al Qaeda that controls much of Idlib Province, there was talk that Mr. Assad’s forces had targeted its fighters on a hill in the countryside east of Latakia Province with chlorine gas on Sunday. There were no photos or other evidence to back up the account, and no details about casualties.

The rebel group said in a post to a WhatsApp group for fighters and followers that three rockets were fired at 9 a.m. on Sunday, injuring four people.

The reports were impossible to confirm on Wednesday.

Mr. Assad has begun an offensive to retake the Idlib area that he had shelved last fall after a cease-fire agreement was put into effect between rebel groups and the Syrian government. Millions of civilians live or are seeking safe harbor in Idlib, the final stronghold of rebels who have tried to topple the government.

Since April, the Syrian military, with help from Russian forces, has started what is expected to be a bloody air bombing campaign in Idlib to retake the territory.

The fighting around southern Idlib and parts of Hama Province has resulted in the deaths of about 223 civilians since April 20, the Syrian Observatory for Human Rights said.

Mr. Jeffrey said on Wednesday that the bombing attacks “have sent some 150,000 to 200,000 people in Idlib, most of whom are already internally displaced people, to move again to temporary housing and create a huge burden on our very broad humanitarian effort.”

In April 2018, Mr. Trump and European allies ordered limited airstrikes and missile attacks from warships after they concluded that the Syrian military had carried out a chemical weapons attack near Damascus that killed at least 40 people.

A year earlier, in April 2017, American ships fired missiles at a Syrian air base after Mr. Assad’s forces carried out a chemical attack that killed at least 80 civilians. American officials had told Russian counterparts about the strike beforehand to try to ensure that Russians would not be in the area.