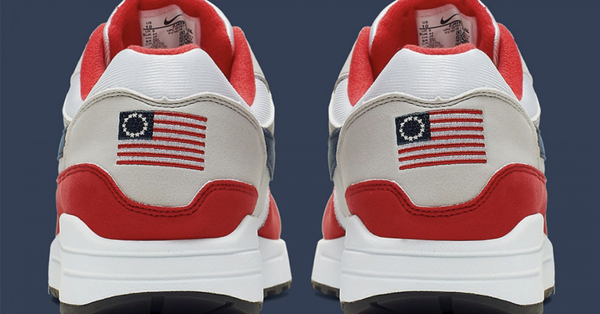 The Quick Strike Fourth of July shoe featured the colonial era ‘Betsy Ross’ US flag used by American revolutionaries on its back.

Republicans such as Texas Senator Ted Cruz have announced a boycott in response to Nike’s decision, while Arizona Governor Doug Ducey has announced the withdrawal of $2m in benefits awarded to the company for its opening of a manufacturing plant in the state.

“Instead of celebrating American history the week of our nation’s independence, Nike has apparently decided that Betsy Ross is unworthy, and has bowed to the current onslaught of political correctness and historical revisionism,” Ducey wrote on his Twitter account.

According to US folklore, the flag is named after the woman who produced the first US flag during the revolutionary war after being commissioned by American leader George Washington.

For conservatives the emblem is a symbol of American independence, however it has drawn controversy for its later association with far-right groups.

The American Nazi Party adopted the flag as a symbol, as have more recent far-right movements.

According to the hate monitoring group, the Southern Poverty Law Center, symbols from the revolutionary period are used by nativist extremists to harken back to a time when slavery was lawful and to support their assertion that they are true inheritors of the foundations on which the US was established.

These concerns were raised by American footballer Colin Kaepernick, who contacted Nike, to voice his objections to the use of the flag on the trainer.

Nike responded to the concerns raised by Kaepernick, by withdrawing the design, fearing it could be exploited by white supremacists.

The former San Francisco 49ers quarterback, was effectively blackballed from the NFL after kneeling during the recital of the US national anthem to protest abuses against African Americans by US police officers.

That decision also provoked a backlash among conservatives against Nike, with a social media campaign encouraging people to boycott Nike products for hiring Kaepernick.