Researchers have managed to synthesize two scorpion venom compounds that are effective against some strains of highly infectious bacteria. The compounds are also unlikely... 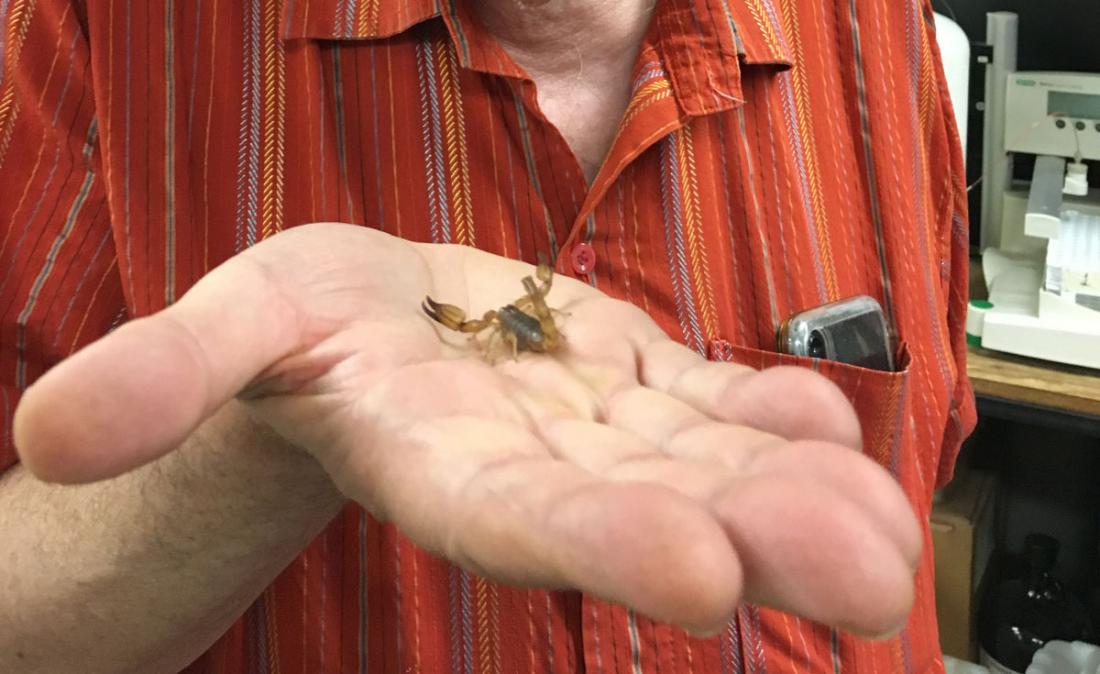 Thousands of animal species around the globe are venomous, from spiders to wasps, fish, snakes, and frogs.

The venom of some animals is only strong enough to produce mild irritation and discourage potential predators, while the venom of other animals, such as the tiny blue-ringed octopus, could easily kill an adult human within minutes.

However, researchers argue that many deadly animal venoms may also hold the answer to infection and disease.

For instance, the venom of Tropidolaemus wagleri, a viper species native to Southeast Asia, could improve the treatment of blood clots, and a key component of funnel web spider venom could help prevent brain damage following a stroke.

Scientists from Stanford University, in California, and the National Autonomous University of Mexico, in Mexico City, have recently made another promising discovery: Two compounds from the venom of a scorpion native to Eastern Mexico, Diplocentrus melici, can fight off difficult bacteria without causing harm to healthy tissue.

The team conducted their research in mice, as well as in tissue samples, to test the compounds’ effectiveness and safety. The study’s findings now appear in PNAS.

The discovery of 2 new compounds

Prof. Richard Zare, from Stanford, Prof. Lourival Possani, from the National Autonomous University of Mexico, and their teams made the intriguing discovery following the capture of a few specimens of D. melici by Prof. Possani’s research students in Mexico.

The two senior researchers and their teams collaborated in identifying the key compounds that made D. melici venom an important pharmacological lead. The entire process was very laborious, and even finding the scorpions, in the first place, was tricky.

“The collection of this species of scorpion is difficult because during the winter and dry seasons, the scorpion is buried. We can only find it in the rainy season,” explains Prof. Possani.

To “milk” the scorpions for their venom, the researchers had to apply mild electric stimuli to the arachnids’ tails. Following this procedure, the team saw that the venom turned brownish as soon as it became exposed to air.

After conducting several sensitive tests, the researchers deemed that two chemical compounds of 1,4-benzoquinone — which they had been able to synthesize from a tiny quantity of scorpion venom — were responsible for this change. Each of these compounds turned a different color, one red and the other blue, when coming into contact with the air.

“We only had 0.5 microliters of the venom to work with. This is 10 times less than the amount of blood a mosquito will suck in a single serving,” notes Prof. Zare.

Benzoquinones, the scientists explain, have antimicrobial properties, and the two compounds that the team identified were previously unknown. They are only subtly different from one another.

“The two compounds are structurally related, but whereas the red one has an oxygen atom on one of its branches, the blue one has a sulfur atom,” explains Shibdas Banerjee, Ph.D., one of the study authors responsible for elucidating the structure of the newly discovered chemicals.

A sting in the tail…against bacteria

Given the fact that benzoquinones can kill bacterial strains, the researchers in Prof. Zare’s laboratory sent samples of the two newly discovered compounds to Dr. Rogelio Hernández-Pando and his colleagues at the Salvador Zubirán National Institute of Health Sciences and Nutrition, in Mexico City, for further testing.

This included M. tuberculosis strains that had developed resistance to multiple antibiotics. However, one question still remained.

“We found that these compounds killed bacteria, but then the question became, ‘Will it kill you, too?'” notes Prof. Zare.

“And the answer is no: Hernández-Pando’s group showed that the blue compound kills tuberculosis bacteria but leaves the lining of the lungs in mice intact.”

The fact that the two newly identified compounds are highly effective against deadly bacteria and seemingly safe to administer makes them ideal candidates for new drugs and therapies. Yet, Prof. Possani observes, this new research path would never have become possible if not for Prof. Zare and his team.

It is thanks to the fact that Prof. Zare and colleagues learned how to synthesize the two benzoquinones from the venom of D. melici that researchers will now be able to look for ways of using these compounds for healing purposes.

“The amount of venom components we can get from the animals is extremely low. The synthesis of the compounds was decisive for the success of this work,” explains Prof. Possani.

“By volume, scorpion venom is one of the most precious materials in the world. It would cost $39 million to produce a gallon of it,” Prof. Zare notes.

“If you depended only on scorpions to produce it, nobody could afford it, so it’s important to identify what the critical ingredients are and be able to synthesize them,” he emphasizes.

In the future, the researchers plan to continue working together to find out how to use D. melici for good. At the same time, Prof. Zare and Prof. Possani are intrigued as to why the two nontoxic chemicals are present in scorpion venom in the first place, and they would like to uncover this mystery.

“These compounds might not be the poisonous component of the venom. We have no idea why the scorpion makes these compounds. There are more mysteries,” says Prof. Zare.