Israel has warned Turkey against an ‘ethnic cleansing’ of the Kurds after President Erdogan launched an assault against Kurdish forces in northern Syria. Prime... 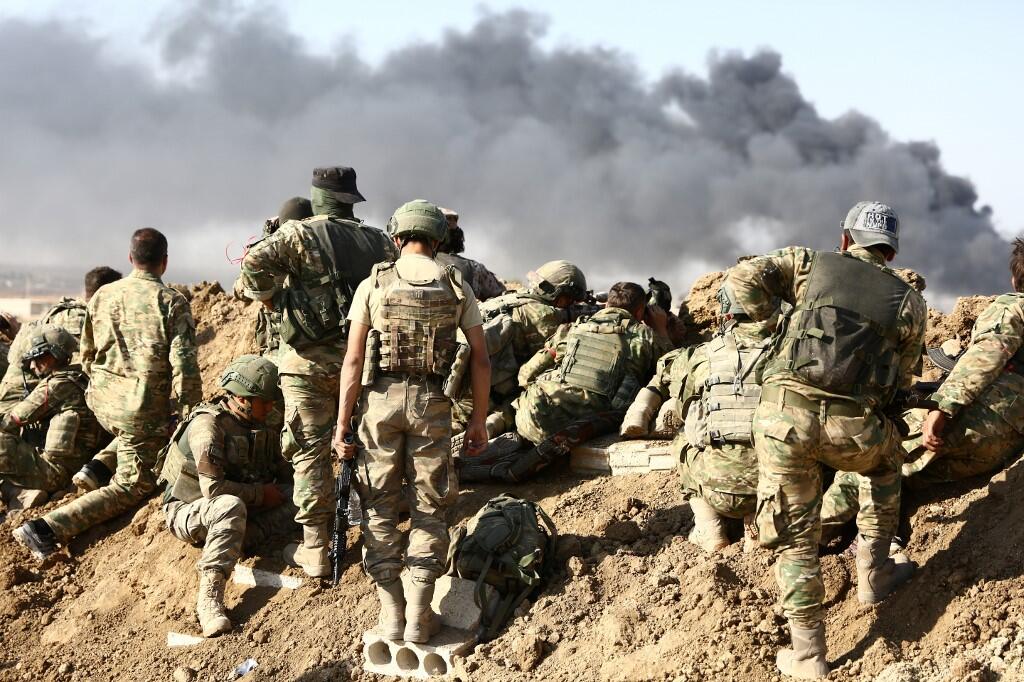 Israel has warned Turkey against an ‘ethnic cleansing’ of the Kurds after President Erdogan launched an assault against Kurdish forces in northern Syria.

It comes after Kurdish commanders in Qamishli, one of the first strongholds to be struck by Turkish air strikes and shells, accused Erdogan’s forces of bombing a prison filled with ISIS jihadis in a deliberate attempt to free them.

Explosions had damaged Chirkin prison where jihadi militants from some 60 countries are being kept, Kurdish jailers said.

‘These attacks on prisons holding Daesh (ISIS) terrorists will lead to a catastrophe the consequences of which the world may not be able to handle later on,’ the Kurdish-led Syrian Democratic Forces said in a statement.

Mustafa Bali, spokesman for Kurdish forces in northern Syria, added that Chirkin prison is where ‘the most dangerous jihadists’ are held.

French President Emmanuel Macron was also among world leaders who condemned the attack, saying that Turkey risks helping ISIS to ‘rebuild its caliphate’.

Qamishli was among the first Kurdish strongholds to be hit by Turkish warplanes and artillery after Erdogan announced the start of Operation Peace Spring Wednesday.

Turkish troops swept into northern Syria not long after in an attempt to create a ‘peace corridor’ some 20 miles wide and 300 miles long along the border.

Turkey says this will allow for the return of some 2million Syrian refugees currently in the country, and possibly another 1million in Europe, if their armed forces are allowed to push further south.

Erdogan also plans to drive ‘terrorists’ away from Turkey’s border, by which he means Kurdish-led forces which allied with the US in the fight against ISIS.

However, critics have argued that this will further destabilise the region, lead to civilian deaths and could cause a resurgence in ISIS.

Of particular concern are prisons holding some 10,000 ISIS fighters, wives and children, including 2,500 foreigners.

Under the new plan, Turkey would become responsible for all of these prisoners, effectively placing the future of European security into Erdogan’s hands.

A senior Kurdish official warned on Thursday that Islamic State militants could break out of prisons in northeast Syria as fighting intensifies.

Badran Jia Kurd told Reuters the number of security forces guarding the IS detainees would have to be reduced as the Turkish forces step up an offensive that got underway on Wednesday.

‘This attack will definitely reduce and weaken the guarding system for those Daesh militants in the prisons,’ he said, using the Arabic acronym for Islamic State.

‘This could lead to their escape or to behaviors that may get out of the control of the security forces,’ added Jia Kurd, adviser to the Kurdish-led authority running much of north and east Syria.

‘The number of forces guarding the prisons is reduced the more the battles intensify. This poses a grave danger.’

Faced with fierce international opposition to his plan, Erdogan wasted no time in threatening to release 3million Syrian refugees into Europe if leaders oppose him.

‘Hey EU, wake up. I say it again: if you try to frame our operation there as an invasion, our task is simple: we will open the doors and send 3.6 million migrants to you,’ Erdogan said in a speech to parliament.

He bragged that 109 ‘terrorists’ had been killed, as the defence ministry announced two border villages had been ‘cleared of terror,’ referring to Kurdish fighters.

Turkey’s operation launched Wednesday has sparked international outrage, raising fears of a new refugee crisis in northern Syria and concern that thousands of jihadists being held in Syrian Kurdish prisons could use it as an opportunity to escape.

The operation had seemed almost inevitable after US President Donald Trump announced on Sunday that American troops deployed in the area were pulling back from the border.

Trump has tried to justify the de facto green light he gifted his Turkish counterpart Recep Tayyip Erdogan for an assault seen as a blatant betrayal of Washington’s erstwhile Kurdish allies.

Netanyahu has been careful not to be seen as criticising Trump, who has provided him with strong backing since taking office, but the US leader’s perceived abandonment of the Kurds has provoked deep concern in Israel.

Israelis have questioned whether their country could be abandoned in a similar way by its most important ally in addition to longstanding concerns over whether arch-enemy Iran will move to fill any vacuum in neighbouring Syria.

Netanyahu has also had tense relations with Erdogan, a vocal supporter of the Palestinian cause.

Trump – who ordered American troops out of the area – said Turkey’s incursion was a ‘bad idea’ and said that Washington ‘does not endorse this attack.’

In the statement, Trump added that Turkey had committed to ‘ensuring no humanitarian crisis takes place – and we will hold them to this commitment.’