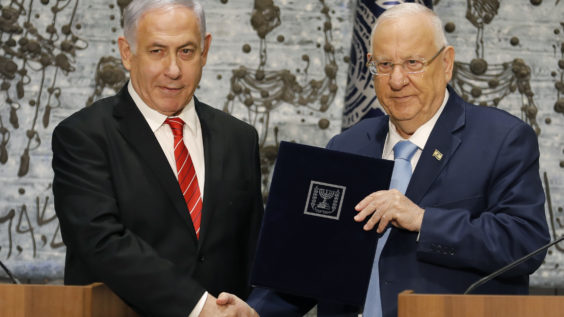 Israeli Prime Minister Binyamin Netanyahu spent Wednesday doing battle on two fronts: continuing to pursue a unity government as he assessed his remaining political prowess; while his legal team spent eleven hours trying to convince the state’s legal brain trust that the charges against him are not accurate and are not worthy of taking to trial. The task of assembling a coalition government has apparently not moved at all, with fingers being pointed at the Blue and White bloc’s number two, former television personality Yair Lapid. The loudest voice swearing oaths against sitting in a Netanyahu-led government, many are just waking up to the realization that Lapid has more to lose than anyone else if a unity government is formed: specifically, the prime minister’s job. His power-share deal to split the term with bloc-head Benny Gantz would be shelved if a unity deal took hold. The PM met with former defense minister Avigdor Liberman of the Yisrael Beitenu party and as expected, got nowhere in the realm of coalition-building. Meanwhile, Netanyahu’s lawyers put in an 11-hour marathon of intense dissection of the charges against him, focusing on discrediting the evidence that resulted in the attorney general’s decision to indict the sitting prime minister. New evidence was reportedly introduced to the prosecutors. There are three more such intense days remaining in the pre-indictment hearing with a decision not expected until the end of the year.