KATHMANDU • Chinese President Xi Jinping wound up two days of meetings in Nepal yesterday with separate deals for a rail link to Tibet... 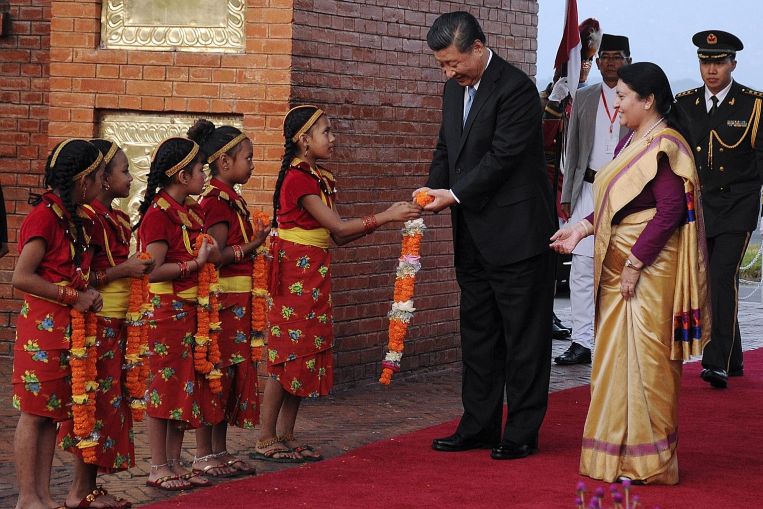 KATHMANDU • Chinese President Xi Jinping wound up two days of meetings in Nepal yesterday with separate deals for a rail link to Tibet and a tunnel, an official said, as the Himalayan nation seeks to end Indian dominance over its trade routes by increasing connectivity with Beijing.

The 70km rail link will connect Gyiron in Tibet with Nepal’s capital city of Kathmandu, making it one of the most ambitious infrastructure projects in the country.

A Chinese team has already conducted a preliminary study for the project, which will be part of China’s Belt and Road Initiative, Mr Xi’s signature diplomatic and trade push that is attempting to recreate the old Silk Road joining China with Asia and Europe.

A proposed 28km road tunnel will more than halve the distance from Kathmandu to the Chinese border, saving time and cost.

“China will now conduct a feasibility study of the rail project and help construct the tunnel way,” said Mr Rajeshor Gyawali, a spokesman for Nepal’s Ministry of Physical Infrastructure and Transport.

Nepal has sought to increase connectivity with China since a blockade along its border with India resulted in several months of acute shortage of fuel and medicine in 2015 and 2016. “These facilities will give us alternative trade routes when we face border blockades,” added Mr Gyawali.

China and India are jostling for influence over Nepal, the natural buffer between them, and are investing in infrastructure. India accounts for nearly two-thirds of Nepal’s trade and is the sole supplier of fuel. China has intensified its presence in Nepal in recent years, pumping millions of dollars into projects ranging from roads to hydropower plants.

During Mr Xi’s visit, the first by a Chinese president in more than two decades, 20 deals covering trade, water supply and traditional medicines were also signed.

“We will help Nepal realise its dream of becoming a land-linked country from a land-locked one,” said Mr Xi at a dinner on Saturday.

He said he and Nepal’s President Bidya Devi Bhandari have decided to upgrade bilateral ties to a strategic partnership of cooperation.

Mr Xi also announced 3.5 billion yuan (S$679.94 million) in aid between next year and 2022 “to uplift the living standard of Nepali people” during his talks with Ms Bhandari, said an official.

Mr Xi also voiced his expectation that China and Nepal would foster closer political relations, build a connectivity network, further consolidate public opinion foundations and carry out richer multilateral cooperation, adding that he was pleased to have reached a new blueprint for China-Nepal relations.

“Anyone attempting to split China in any part of the country will end in crushed bodies and shattered bones,” he was quoted by China’s state broadcaster CCTV as telling the Prime Minister.

“And any external forces backing such attempts at dividing China will be deemed by the Chinese people as pipe-dreaming.”

Mr Oli said his country firmly supports China in safeguarding its sovereignty and territorial integrity and stands firm in upholding the “one China” policy. He added that Nepal will oppose any “anti-China activities” on its soil, CCTV reported.

Before arriving in Nepal, Mr Xi was in India for talks with Indian Prime Minister Narendra Modi to try to mend ties over the disputed Himalayan region of Kashmir amid scattered anti-China protests from Tibetan groups.