The IPO pipeline looks promising in the GCC as nearly 10 companies are aiming to go public in the near future with more than...

The IPO pipeline looks promising in the GCC as nearly 10 companies are aiming to go public in the near future with more than $7 billion (Dh25.7 billion) in fund raising in the offing.

Analysts said some of the entities could opt for international listings, especially on the London Stock Exchange (LSE), which has been the favourite international bourse of regional firms. 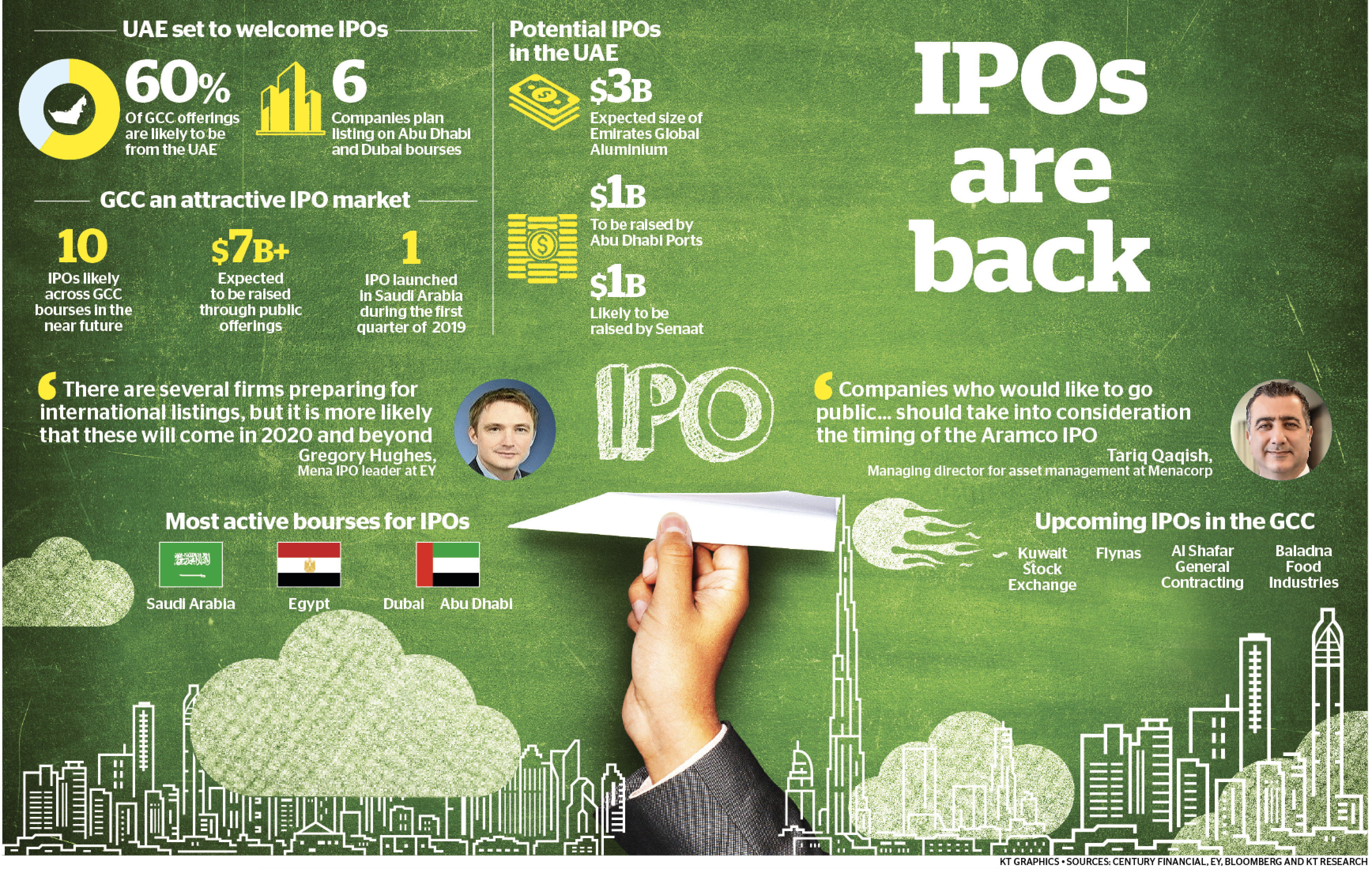 “The total amount proposed to be raised from the serious candidates is about $6-$7 billion with Emirates Global Aluminium, Abu Dhabi Ports and Senaat expected to issue shares worth $3 billion, $1 billion and $1 billion, respectively,” he said.

In April, Bloomberg reported that three companies were looking to float their shares on the Dubai bourse, which would essentially end the 17-month IPO drought on the local market. Further details were not revealed.

Valecha said the Dubai Financial Market, Saudi Arabia’s Tadawul and the Abu Dhabi Securities Exchange are expected to see the most activity, helped by the UAE Cabinet’s decision to allow 100 per cent foreign ownership of companies in select sectors, raising foreign ownership limits and the launch of long-term visas.

Gregory Hughes, Mena IPO leader at EY, also confirmed that a number of preparatory projects for companies in various sectors and sizes are ongoing for IPOs.

He expects that Saudi and Egypt bourses will predominantly lead the IPO market, perhaps also the UAE, but with a smaller proportion.

“There are several companies preparing for international listings from the region, but it is more likely that these will come in 2020 and beyond,” he added.

Of late, local companies are looking to list abroad, especially on the LSE. The latest to list was Dubai-based Network International, which raised $1.4 billion. Prior to that, Finablr, a payments and foreign exchange company, listed on the London bourse – the second company of UAE-based billionaire B.R. Shetty to list on London after NMC Health.

Tariq Qaqish, managing director for asset management at Menacorp, said although the IPO pipeline is looking promising across the GCC especially in Saudi Arabia, some external factors could affect the timings of the listings.

“Previously, companies would make sure market trends and peer multiples are favourable for the success of an IPO. This time, the concern is more on the geopolitical side and its effect on momentum and liquidity. Saudi Arabia and Kuwait received MSCI upgrades recently and are considered positive for companies to go public; we expect this to expedite once geopolitical tensions are lessened,” said Qaqish.

Following Saudi Arabia’s addition to MSCI Inc’s indexes, the kingdom’s stocks have been into a bull market bringing record fund inflows. The Tadawul index has had a record run this year with year-to-date gains of approximately 20 per cent seen in early-May. The conditions are conducive for further primary market listings.

Supported by its MSCI upgrade, Saudi Arabia has attracted $10.8 billion in foreign equity inflows so far this year, the Institute of International Finance said on Sunday.

Analysts cautioned that Saudi Aramco’s IPO – projected to be valued at $100 billion – will dry up liquidity not just from the secondary market but also from the primary market. Hence, companies planning to go public must take into consideration the timing of Aramco’s IPO.

“An Aramco IPO, for sure, will dry up liquidity not only from the secondary market but also from the primary. I believe companies who would like to go public especially in Saudi Arabia should take into consideration the timing of the Aramco IPO,” said Qaqish.

Saudi Crown Prince Mohammed bin Salman recently said in an interview that Aramco’s IPO plan is on track for 2020-21, provided favourable conditions and the right timing.

Valecha says Aramco is indeed a large IPO and it will be a big factor for many companies planning their own listings.

“Nevertheless, there are other important aspects like global risk sentiment and oil prices which are also important. With Opec production compliance very strong, the macro variables are favourable for GCC and this could support the listing of more IPOs.”

Hughes advised that the key for firms is to be ready to execute at any point as IPO windows are tight, so a detailed readiness exercise is critical at an early stage to identify the key gaps.

“It is possible that larger listings planned in the region, or globally, can divert attention and funds from smaller regional deals,” he added.