The Halal Food Festival in London took foodies on a cultural world tour and gave them a chance to explore a wide range of... 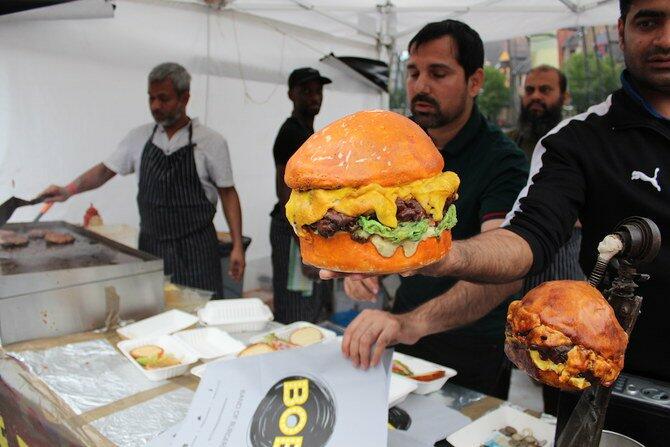 The Halal Food Festival in London took foodies on a cultural world tour and gave them a chance to explore a wide range of cuisines. The two-day event, on August 4 and 5, also targeted entrepreneurs, startups and those looking to launch a career in the industry, from chefs to caterers, providing a great platform at which to introduce products and services.

Organizers said the festival was launched four years ago as a reaction to the high demand for halal food in the UK “by the Muslim community and everybody outside the community,” and a dire need, and resultant opportunities, for more variety.

“There was no one place where people could get different cuisines, all of halal nature, under one roof, so at the Halal Food Festival you have more than 150 cuisines from all over the world and all completely halal,” said Waleed Jahangia, the event’s founder and CEO.

Over the years, he added, the number of participants from the Middle East, particularly Saudi Arabia and Dubai, has greatly increased. The event has also attracted many vendors from countries in Africa and Asia, including Egypt, Morocco and Malaysia.

“It really is an international platform for businesses from around the globe to tackle the UK market,” said Jahangia. “Each year we get bigger and we are always trying to progress the industry. We will be doing more by reaching out to a more international audience as the years go by.”

Islamic Relief, the charity sponsor of the event, was accepting donations for the upcoming Eid Al-Adha holiday from locals and foreigners alike.

“It is in line with Islamic Relief’s work because it is appreciating the different foods and different cuisines from across the globe,” said Hasnain Syed, the charity’s major gifts manager. “Islamic Relief is about building bridges among communities, sharing love, sharing hope and providing hope and support to those in other parts of the world who don’t have the luxuries and facilities we do.”

He added that visitors from the Middle East had come to the charity’s stall to make donations that will help provide food packages and lamb sacrifices for the needy during Eid, which is expected to fall on Aug. 10.

The concept of Halal is not only based on food and diet, but has developed to encompass other lifestyle choices, including fashion, cosmetics, travel, health and finance.

The festival was held at the weekend at the Tobacco Dock building in east London. In addition to the chance to sample an amazing array of food and drink from all over the world, there were cookery and butchery demonstrations, activities for children, and even burger and chili-eating competitions.

Nine-year-old Ayoub Mirza, from East London, came to the festival with his family. It was the first time he had been to the event and he said he would be back next year.

“My favorite (vendor) was Band of Burgers — that was really nice, and so were the churros as well, and the pineapple stuff and the strawberries and the marshmallows,” he said. He added that he was also enjoying the musical entertainment.

This year’s event marks the third time that London restaurant brand Band of Burgers, which launched in 2015, has taken part in the festival.

“It has been amazing all the time,” said the company’s director, Muhammad Zeeshan Amin. “It is one of the best events where Muslims can go and gather together.”

He added that he had noticed an increased number of Arab visitors compared with last year, most of whom were visiting from France.

Staff at Steakout, a casual-dining restaurant specializing in steaks and burgers, reported a similar trend. The business was participating in the event for a second year in a row.

“We are residents here now and we intend to come back every year,” said Kaysor Ali, the company’s managing director. “Last year we had customers from France, and this year again. There’s also a lot of customers coming from up and down the country, from as far north as Manchester, which is a four or five-hour drive. So it’s been quite a widespread response.”

Ojos Foods, another vendor at the event, offers high-quality cured meats from Spain, including salami and chorizo, as well as award-winning beef products.

Company director Encina Barragan said she enjoyed seeing the expression on people’s faces and their reactions to her products.

“To start with, they don’t want to try (the food) because it is something new and the question that we get asked every time is it halal? Of course it’s halal, and once you’ve tried it you find the flavors are actually really good,” she said.

Ojos products have earned stars from the Great Taste Awards this year, and the company’s premium beef is in contention for the Golden Fork Awards.

“We have Ajwa Al-Alia from Madinah, which is the most refined type of ajwa and it’s been extremely popular,” said Farakh Iqbal, the company’s managing director and co-founder. “It’s the best seller all around the world, especially among Muslims. People have really enjoyed them; they’ve enjoyed tasting them and they’ve enjoyed dipping them in chocolate as well. Many have bought the lovely gift boxes, which worked very well.”