Medical News Today: How does smoking affect the body?

Smoking cigarettes can have many adverse effects on the body. Some of these can lead to life-threatening complications. In fact, according to the Centers...

In fact, according to the Centers for Disease Control and Prevention (CDC), smoking cigarettes increases the risk of dying from all causes, not just those linked to tobacco use.

In this article, we look at 10 possible effects of smoking cigarettes. 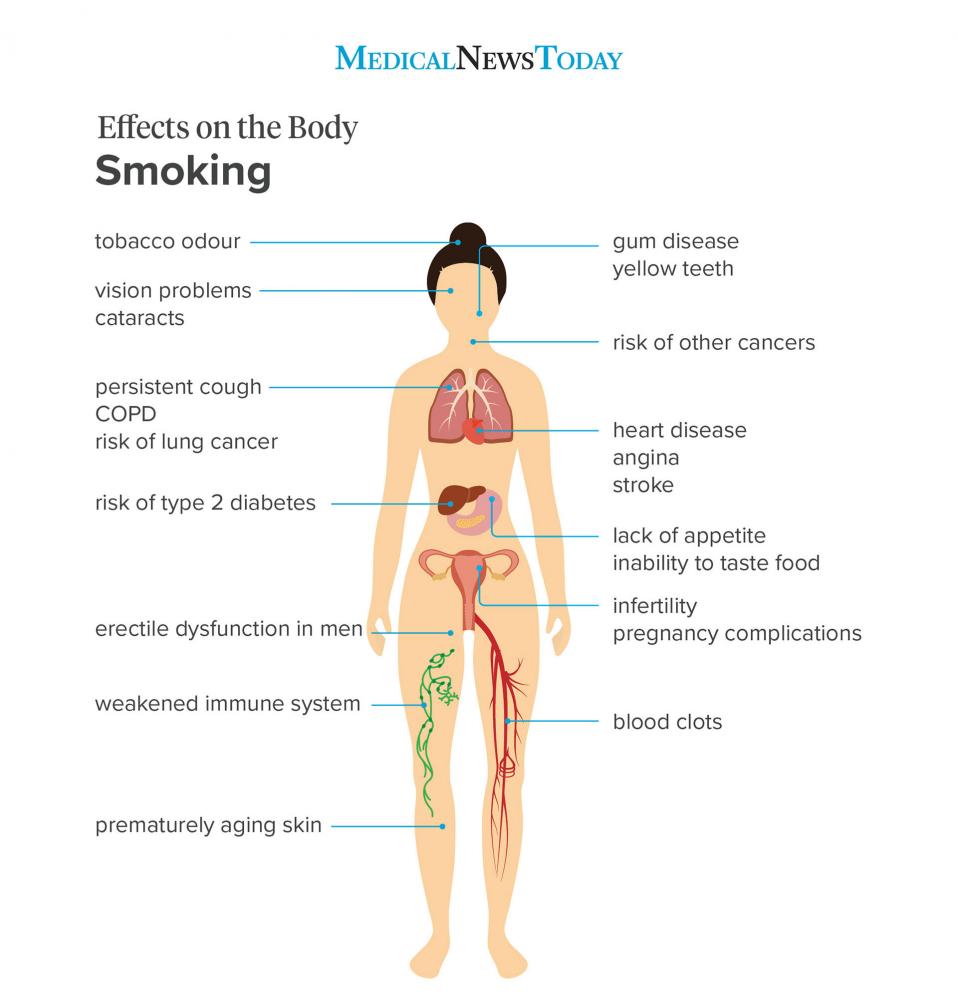 Smoking cigarettes affects lung health because a person breathes in not only nicotine but also a variety of additional chemicals.

The CDC report that roughly 9 out of 10 lung cancer deaths is linked to smoking.

Cigarettes are also linked to developing emphysema and chronic bronchitis. They can also trigger or exacerbate an asthma attack.

The chemicals and tar in cigarettes can increase a person’s risk of atherosclerosis, which is the buildup of plaque in the blood vessels. This buildup limits blood flow and can lead to dangerous blockages.

Smoking also increases the risk of peripheral artery disease (PAD), which occurs when the arteries to the arms and legs start to narrow, restricting blood flow.

Research shows a direct link between smoking and developing PAD. Even those who used to smoke face a higher risk than people who never smoked.

Having PAD increases the risk of experiencing:

Smoking cigarettes can damage a female’s reproductive system and make it more difficult to get pregnant. This may be because tobacco and the other chemicals in cigarettes affect hormone levels.

In males, the more cigarettes a person smokes and the longer they smoke for, the higher the risk of erectile dysfunction. Smoking can also affect the quality of the sperm and therefore reduce fertility. 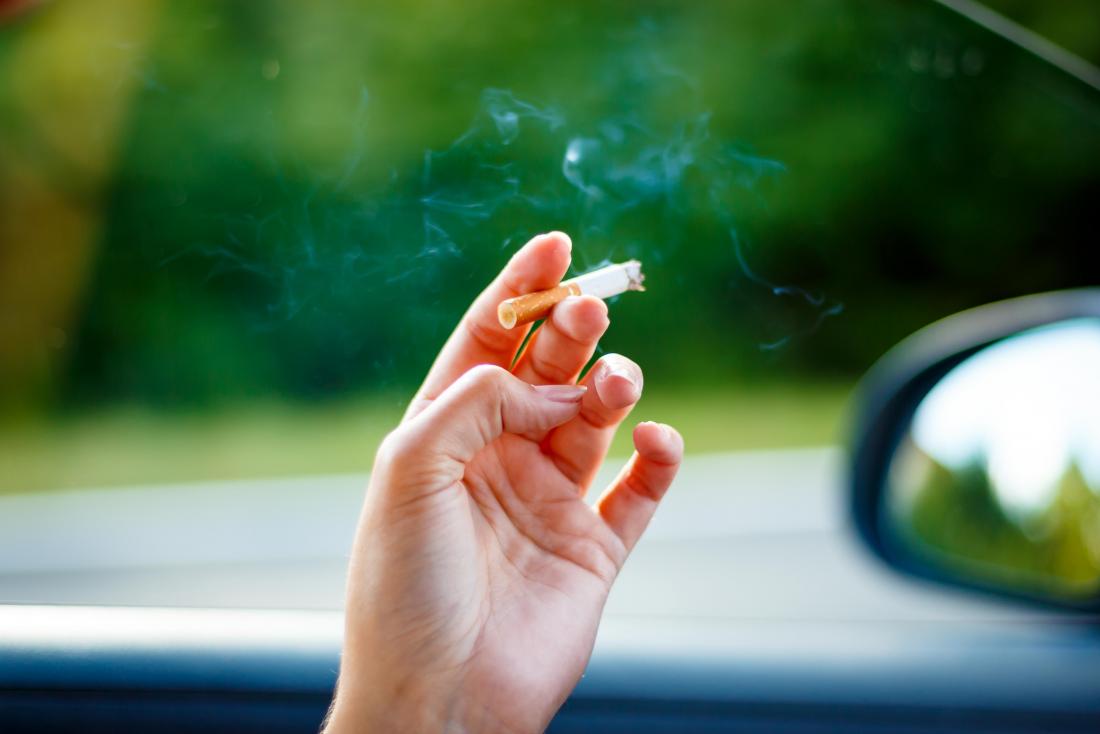 Smoking can increase the risk of ectopic pregancy and reduce the baby’s birth weight.

According to the CDC, smoking can affect pregnancy and the developing fetus in several ways, including:

The CDC report that people who smoke regularly have a 30–40 percent higher risk of developing type 2 diabetes than those who do not.

Smoking can also make it more difficult for people with diabetes to manage their condition.

It can also cause additional inflammation in the body.

Smoking cigarettes can cause eye problems, including a greater risk of cataracts and age-related macular degeneration.

Other vision problems related to smoking include:

People who smoke have double the risk of gum disease. This risk increases with the number of cigarettes a person smokes.

Symptoms of gum disease include:

Smoking tobacco can limit a person’s ability to taste and smell things properly. It can also stain the teeth yellow or brown.

Smoking tobacco can affect a person’s skin and hair. A person who smokes may experience prematurely aged, wrinkled skin. They also have a higher risk of skin cancer, “especially on the lips.”

Smoking can cause the hair and skin to smell of tobacco. It can also contribute to hair loss and balding.

10. Risk of other cancers

In addition to the well-documented link with lung cancer, smoking cigarettes can also contribute to other forms of cancer.

People who smoke are also three times as likely to develop bladder cancer than people who do not.

Smoking cigarettes can also double a person’s risk of stomach cancer. Tobacco is especially linked to stomach cancers that occur near the esophagus.

Cigarettes can also increase the risk of: 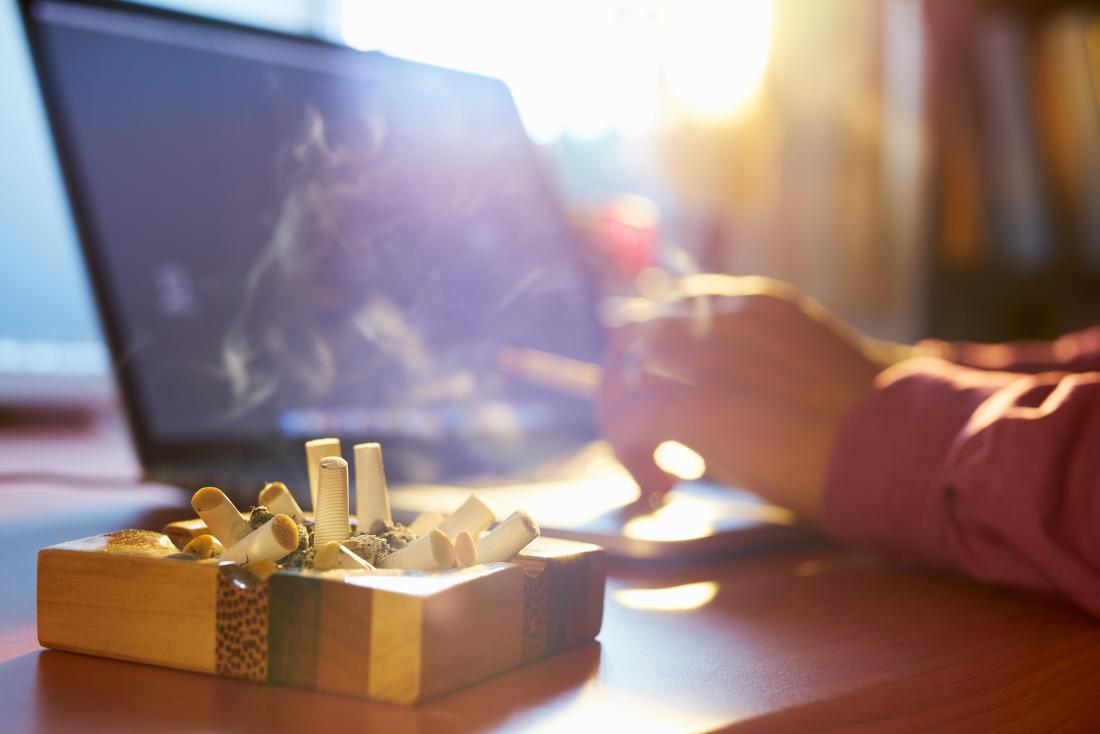 Secondhand smoke can increase the risk of colds, make asthma worse, and damage the heart.

The ill effects of smoking cigarettes do not only affect people who smoke. Secondhand smoke can also have significant health effects on family members, friends, and coworkers.

Effects of exposure to secondhand smoke include:

While quitting smoking can be challenging, the CDC report that today, there are more people who used to smoke than people who currently smoke.

Once a person stops smoking, the benefits start accumulating. These include clearer skin, improved oral health, more stable hormones, a stronger immune system, and a reduced risk of many types of cancers.

Some other benefits of quitting smoking include:

Nicotine is an addictive drug and can cause withdrawal symptoms when a person stops using it. These symptoms including cravings, increased appetite, and irritability. Cravings and other effects typically subside over time.

A doctor or other healthcare professional can help a person take positive steps toward quitting smoking.

Read about some simple steps to quit smoking here.