McDonald’s workers in the UK have gone on strike as part of a global day of protests over pay. Staff at six South London... 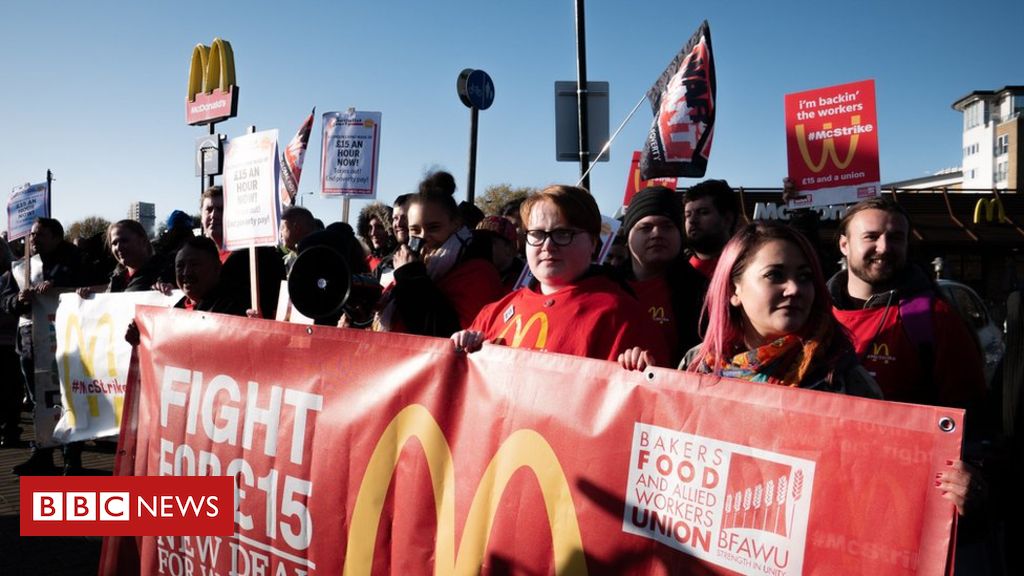 McDonald’s workers in the UK have gone on strike as part of a global day of protests over pay.

Staff at six South London stores are walking out on Tuesday, while protests will be held across the UK, including outside Downing Street.

They are demanding an end to “poverty pay” rates and better terms and conditions.

McDonald’s said that the strikers represented a “tiny proportion” of its UK workforce.

It comes as staff in countries such as the US, France, Brazil and Chile also stage protests and strikes over wages.

In the UK, McDonald’s workers are calling for a rise in pay to £15 an hour – over a third more than what they currently earn.

They also want an end to youth rates, the choice of guaranteed hours of up to 40 hours a week, notice of shifts four weeks in advance and recognition of their union, the Bakers, Food and Allied Workers’ Union (BFAWU).

An employee at Crayford McDonald’s in London, Lewis Baker, said he will be striking because he struggles to pay rent on his income of £8.80 an hour.

Mr Baker, 29, said: “There are a lot of workers who are struggling to pay their bills and get by day to day.

“We don’t have set hours, so we don’t always earn enough to pay the bills.

“If we got £15 an hour, it would have a massive impact – I would be able to afford to pay my rent, to pay my bills, go on holiday and have some kind of work-life balance.”

Melissa Evans, 32, a mum who works at McDonald’s in Wandsworth Town in London said McDonald’s workers deserved “the same level of respect as everyone else”.

“We are coming together to tackle poverty pay, insecurity of hours and lack of respect, which has gone on at McDonald’s for too long.”

This is the fourth time McDonald’s workers in the UK have gone on strike since September 2017, with each successive strike getting bigger.

There has also been strike action around the world over the fast-food giant’s pay rates, with thousands walking out in the US.

The company has faced criticism for paying executives large salaries, while employees on the shopfloor struggle to get by.

Former boss Steve Easterbrook – who was fired last week for having a relationship with an unnamed employee – received remuneration of $15.9m in 2018. That was 2,124 times the median McDonald’s employee salary of $7,473.

Shadow chancellor John McDonnell, who will join workers outside Downing Street this afternoon, said low pay and insecure work were “endemic” in the fast-food industry.

Owen Espley of charity War on Want, which is backing the strikes, said McDonald’s workers were exploited but were “fighting back”.

“[They are] demanding respect and a fair share of the profits,” he said.

He said: “We are extremely disappointed that a very small number of our people in just a handful of our restaurants are considering industrial action.

“We understand only nine people are involved across six restaurants, which is a tiny proportion of our 130,000 workforce and 1,300 restaurants.

“Their potential actions do not represent our people. We are committed to investing in our workforce, listening to and doing what is right by them.

“The BFAWU is calling for 40-hour guaranteed contracts, which is something we already offer – but has been chosen by very few of our people.”