Mass Weddings is Phenomenal in Lebanon

BKERKE, Lebanon — Classical music swelled as the bride stepped from a white sedan onto a red carpet, took the arm of her tuxedoed...

BKERKE, Lebanon — Classical music swelled as the bride stepped from a white sedan onto a red carpet, took the arm of her tuxedoed groom and walked down the aisle, both grinning as their relatives cheered nearby.

Once the couples — 34 that day — reached their seats, the patriarch of the Maronite Church, dressed in crimson robes and gripping a scepter topped with a golden cross, led Mass and declared the whole lot husbands and wives.

It was Lebanon’s fourth mass wedding in three weeks, representing a social phenomenon that has been growing here and across the Middle East.

In a region where marriage remains highly valued but economic pressures and costly celebrations have priced many couples out, powerful benefactors have stepped in, sponsoring large-scale ceremonies to make sure that young people get hitched.

Politics, faith and Lebanon’s complicated demographics play a role too, in this country with 18 officially recognized sects.

Political parties sponsor weddings for young members to reinforce their loyalty, and gratitude. Religious and ethnic minorities — which means everyone in splintered Lebanon — consider marriage and procreation essential to their long-term survival. And armed groups encourage their fighters to marry so that their children can become the fighters of the future.

A few weeks before the Maronite nuptials, Hezbollah, the Shiite militant group and political party, oversaw a similar enormous wedding for 31 couples. That was tiny compared with a mass wedding in Lebanon earlier this year that brought together 196 couples and was sponsored by the Palestinian Authority president, Mahmoud Abbas.

But the nearby Gaza Strip — where an Egyptian-Israeli blockade keeps people poor and locked in — beats them all, often because of competition between foreign sponsors eager to win friends by expediting marriages.

In 2015, the United Arab Emirates sponsored a mass wedding there for 200 couples. Two months later, Turkey seriously upped the ante, bankrolling a ceremony for 2,000 couples that was attended by officials from Hamas, the militant group that rules the territory.

Mass weddings hold a lot of appeal for couples who cannot afford their own celebrations, or want to spend their money on other things, like building homes or starting businesses.

“They take care of everything, God bless them,” said Roni Abu Zeid, 35, who got married in the Maronite mass wedding, which was held in Bkerke, a town near the Mediterranean coast, north of Beirut. It is the headquarters of the Maronite Church.

Mr. Zeid is a soldier, and with his salary it was difficult to save the $20,000 he needed to outfit a home and host his own wedding party. So he gladly joined the mass wedding. 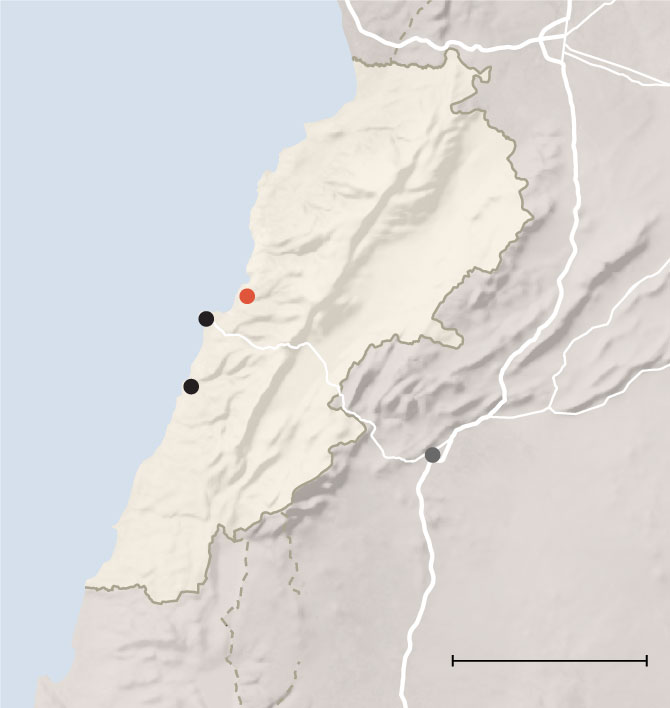 “If we got married elsewhere, we would have suffered,” he said.

His wedding was sponsored by the Maronite League, a nonprofit group associated with the church. Maronites are the largest of the Christian groups that make up about 36 percent of Lebanon’s population.

Fadi Gerges, an official with the league, said it was natural for minorities to encourage their youths to procreate in a country where demographics affect power.

“When any ethnic group feels they are in danger, they pull together,” he said. “When they see the numbers going up on the other side, they think maybe they can place a pebble to prevent a landslide.”

This year’s mass wedding was the group’s 10th in 11 years, bringing the number of couples it has married to 274. So far, those unions have resulted in only three divorces and more than 100 children.

To be part of the league’s group ceremony, couples must apply. At least one of the couple must be a Maronite, and the groom must have a house and a job.

Accepted couples get a free suit for the groom, a dress for the bride, invitations, flowers, photos, $2,000 in cash and a blessing from the patriarch — a big bonus for the devout.

During the ceremony, the couples came forward one by one to say their “I dos” while their families clapped and ululated from the audience. A camera on a crane shot footage for a television broadcast while a drone zoomed about filming the proceedings.

The league once provided refreshments, but unfortunate jostling between families for drinks and snacks put an end to that, Mr. Gerges said.

The league gives couples marital support as needed while encouraging procreation. This year, it will outfit a nursery for the first 10 couples to give birth. Other religious and political groups provide different perks.

The same week as the wedding in Bkerke, 19 couples gathered at a resort in Jiyeh, a beachfront town south of Beirut, for another mass wedding organized by Oasis of Hope, a volunteer group linked to the Amal Movement, a Shiite political party.

Tables adorned with white cloths, candles and appetizers filled the lawn and surrounded the swimming pool, rare luxuries for the mostly poor families who came to see their young people wed.

Fatima Qabalan, an organizer, said the group had married about 300 couples in 12 mass weddings over the years. It not only provided them with a fancy celebration they could not otherwise afford, but helped them set up homes, giving them furniture and appliances.

The group gave precedence to the children of party members who had been wounded or killed in Lebanon’s wars, but also to the poor, to help their marriages get off the ground.

“If we didn’t help them start and set up their home, they would be going into debt and heading for failure,” Ms. Qabalan said.

While waiters in starched shirts distributed trays of grilled meat and piles of rice and fish, party officials gave speeches and a prominent journalist took to the microphone to remind the couples of the importance of childbearing to the “resistance,” or the struggle against Israel.

A dance troupe stormed in, banging drums, chanting and waving flaming batons and giant red hearts. Then the couples proceeded through the crowd, the grooms in black suits and ties, and the brides in white dresses with attached hair veils. Their relatives snapped photos as they passed.

Ali Ala’ideen, a groom whose hair was slicked back like Elvis’s, said that he and his new wife could not afford a honeymoon, but that he was grateful to be married.

“If it wasn’t a group wedding,” he said, “we wouldn’t have been able.”

After dinner, the families took photos of a large, tiered cake. Fireworks boomed over the Mediterranean, there was a bit of dancing, and the couples left to start their lives together.

One groom, Abdullah Dbouk, said his wife had caught his eye when he was hospitalized for appendicitis and saw her working as a nurse. Once he was out, he tracked down her family.

The couple visited and chatted on Facebook for months before getting engaged, but lacked the money for a big wedding party. So they asked officials from the Amal Movement if they could join the mass wedding.

“Thank God for the appendicitis!” said the 26-year-old groom.