NEW YORK (NYTIMES) – Marriott International made a down payment of sorts on a sweeping overhaul of the Sheraton brand last year, buying the... 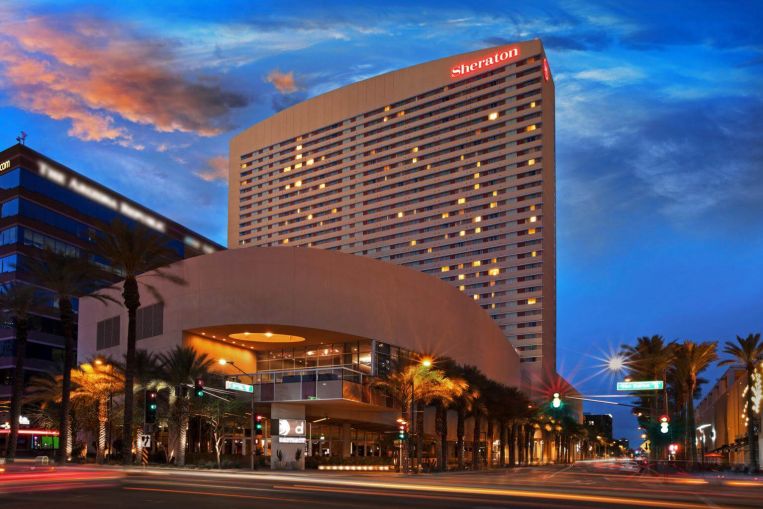 NEW YORK (NYTIMES) – Marriott International made a down payment of sorts on a sweeping overhaul of the Sheraton brand last year, buying the Sheraton Grand Phoenix for US$255 million (S$349.4 million) to remake it into a prototype for the new face of the brand.

Work began in March on an extensive renovation of the 1,000-room hotel. Guest-room furniture will be lighter in color and more streamlined. There will be adjustable tables in lieu of desks, updated lighting and multiple seating options. Public spaces are being restyled to be gathering places, with semiprivate studios and phone-boothlike pods in the lobby where people can retreat for private calls.

Sheraton was one of the brands that came with Marriott’s acquisition of Starwood Hotels in 2016, and Marriott knew from the start that travellers saw the chain – now 82 years old – as tired and dated. As Douglas DeBoer, chief executive of Rebel Design & Group, a hotel design consulting firm that is not working for Marriott on the rebranding, put it, Sheraton is “the epitome of the beige hotel.”

Julius Robinson, a senior vice president at Marriott International who oversees the Marriott, Sheraton and Delta brands, offered a similar opinion. “Sheraton’s been a brand that’s had a relatively rough road,” he said.

In June, Marriott’s chief executive, Arne Sorenson, pledged to invest half a billion dollars into updating the look of Sheraton and, hopefully, its reputation. But creating a consistent brand identity will take time. The Phoenix renovation is expected to wrap up at the end of this year or in early 2020, and Robinson said it would take five to seven years for a “critical mass” of Sheraton hotels to be renovated.

“There’s no easy answer here, and I think Marriott knew that when they bought Starwood,” said Michael Bellisario, a vice president and senior research analyst at Robert W. Baird & Co, a financial services company that buys and sells Marriott stock. “The issue is really brand inconsistency.”

So far, the most visible part of the undertaking is a new Sheraton logo, unveiled in March, that includes a nod to the brand’s history with “Est. 1937” at the bottom.

Reminding travelers of its date of birth is a risky move, given Sheraton’s reputation. But it’s a calculated risk that Marriott deemed necessary for a credible repositioning of the brand, said Tina Edmundson, global brand officer for Marriott International.

“We’re not shying away from or trying to pretend this is a new brand,” Edmundson said. “We have to own who we are.”

She added: “In so many ways it’s so much easier to create a new brand. One of the biggest challenges with a new brand is awareness. Now, we have awareness that might not be all positive.”

Jennifer Johnson, owner of the Johnson Meetings Group, a meeting planning company in Raleigh, North Carolina, said she was hesitant to book Sheraton hotels sight unseen even though they often had spacious guest rooms or other desirable attributes.

“I can’t counsel my clients to commit to it without seeing it,” she said. “You’re still seeing mauve and brass and things like that that take it back to the ’80s.”

A major hurdle for Sheraton’s reinvention is its sheer size. The brand has roughly 200 hotels in the United States and 250 or so overseas, in big cities, suburbs, airports and resort destinations. Sheraton hotels, in fact, made up close to half of the Starwood portfolio that Marriott bought.

Bjorn Hanson, a hospitality industry consultant, said it would be a challenge for Marriott to reconcile the diversity within Sheraton and create a unified brand identity. “It becomes very difficult to say, ‘Here is the model for Sheraton,’ ” he said, “because what is a Sheraton hotel?”

The overhaul will also take a long time because aside from a few notable exceptions like the Sheraton Grand Phoenix, Marriott isn’t the company paying for all the renovations.

“It’s not as easy because there are long-term contracts with hotel owners and operators,” said Helen Chun, an associate professor of services marketing at Cornell University’s School of Hotel Administration.

Most higher-end hotels aren’t owned by the management company whose name is on the marquee. The management company – or its corporate parent, like Marriott International – sets brand standards, but it cannot require an ownership entity (often a specialized investment vehicle called a real estate investment trust) to sink millions of dollars into a renovation years earlier than the contract stipulates.

“We need to make sure that this model we’re building works for an owner and is economically feasible,” Edmundson said. “We’re certainly in primary markets, but we also have a presence in secondary and tertiary markets.”

Owners in less lucrative markets who are unwilling or unable to shoulder the cost might have the option of switching to a lower-end brand – and they would have plenty of options. Marriott’s acquisition of Starwood left it with a dizzying 30-brand portfolio. At the moment, industry consultants say, having a lot of brands is a good thing.

According to industry trade publication Hotel News Now, 18 brands were introduced last year alone, although some experts predict the pace of new openings will slow. Still, they say, it is unlikely that big hotel companies will shrink their stables of brands anytime soon.

“I think that what they’ll do is they really want to cover as much of the landscape as they can,” said Bobby Bowers, senior vice president of operations at hotel data firm STR.

Hotel companies are instead focused on driving bookings to their sites or apps, rather than to online travel agencies like Travelocity or Priceline, which charge a commission.

To that end, Marriott has been aggressively promoting its Marriott Bonvoy loyalty program as a brand-agnostic vehicle for travelers to earn points across a wide array of price points and environments.

“The marketplace is really saturated at a good level,” said Meg Prendergast, principal at hospitality design and consulting firm the Gettys Group. “That gives the consumer, the guest, lots of options.”

The flip side is that the stakes are higher than ever for Marriott to get it right with Sheraton’s redone image.

“Because of that saturation of the marketplace, the notion of where they are really has to resonate with that guest at the end of the day,” Prendergast said. “They have a huge market share of the hospitality marketplace. It behooves Marriott to pay a lot of attention to this brand.”