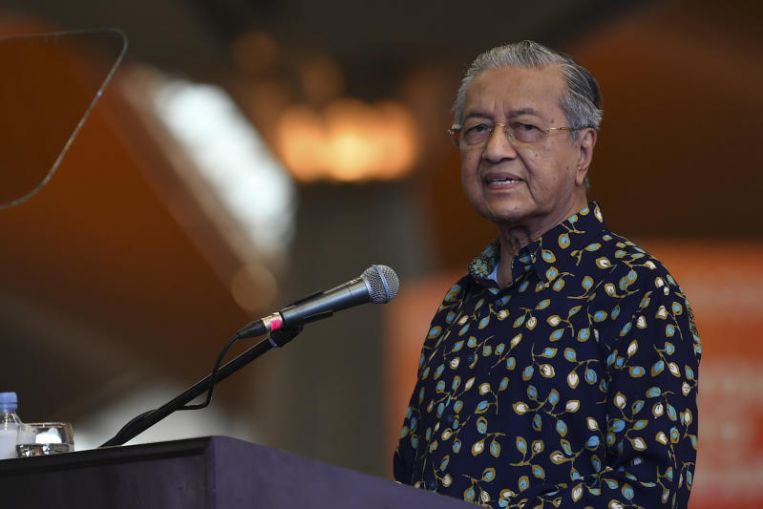 In an interview with Kyodo News in the southwestern Japan city of Fukuoka, Dr Mahathir also urged Japan and South Korea to try to resolve their dispute over historical and trade issues through dialogue, rather than confrontation.

“I think Japan is one country that should work hard to prohibit the use of nuclear weapons, in fact, to get rid of all nuclear weapons because Japan is the only country in the world that suffered from bombing by nuclear device so Japan knows how horrible it is when nuclear weapons are used,” Dr Mahathir said.

In arguing that Japan should sign the treaty banning nuclear weapons, Dr Mahathir said other countries could emulate Japan’s constitution that bars it from waging war as a means of settling international disputes, saying it is the only such constitutional provision in the world.

The Treaty on the Prohibition of Nuclear Weapons was adopted in July 2017. So far, 70 counties and regions have become signatories, according to the UN office on disarmament.

The pact needs a total of 50 ratifications to come into effect. On Tuesday, the 74th anniversary of the US atomic bombing of Hiroshima, Bolivia became the 25th UN member to ratify it.

Nuclear-weapon states such as the United States and China have not joined the pact. Japan and other nations under the protection of the US nuclear umbrella have also stayed out of the treaty.

On Japan’s renunciation of war as a sovereign right of the nation and of the threat or use of force as means of settling international disputes – codified in Article 9 of its postwar pacifist Constitution – Dr Mahathir said Japan should stick to the provision.

“Japan is the only country in the world which has outlawed war, aggressive war, in order to solve problems of conflict between nations. That is a good beginning. Other countries should follow,” he said.

The prime minister meanwhile acknowledged Japan’s need for fighting capabilities to defend itself, but expressed concern over a scenario under which a military stronger Japan “might be persuaded by certain other countries to be aggressive”.

“That will be very bad because we are making a step backward,” he said. “We should be going forward and abolish war as a way of resolving conflicts.

In a move that has divided the nation, Japanese Prime Minister Shinzo Abe has proposed revising Article 9 in a way that would clarify the status of the Self-Defence Forces, whose constitutional basis for existence has been disputed by some scholars on the provision’s grounds.

Japan “should keep that part of the constitution which outlaws war, aggressive war,” said Dr Mahathir, who has run an antiwar campaign as founder of Perdana Global Peace Foundation, an advocacy group that aims to make waging war a crime.

As to the Japan-South Korea ties, which have sunk to their lowest level in years over wartime labour and export controls, Dr Mahathir said he agrees that atrocities were committed during Japan’s colonial rule of Korea from 1910 to 1945. “But if you look into the past, we always have bad relations.”

“I think South Korea and Japan should not have any confrontation. If you have a problem, sit down and talk to each other and try to resolve” it, he said, adding that Japan has already apologised over its past actions.

The Malaysian leader is on a two-day visit to Fukuoka through Thursday. The visit is his second to Japan this year, following one in May.