The Frasers and Winten joint venture will be at Macquarie Park’s new Metro station. It will convert the 15,620 square metre site into four...

The Frasers and Winten joint venture will be at Macquarie Park’s new Metro station. It will convert the 15,620 square metre site into four buildings: one 16 storeys and three 8 storeys high, equating to about 83,368 sq m of commercial space. 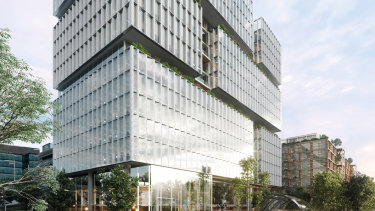 How the new $750 million Macquarie Exchange will look.

The development will include 5693 sq m of retail, a childcare centre, gym and a large central park with over 2200 sq m of green space.

Reini Otter from Frasers Property Australia said on completion it will house more than 7000 employees in a hub designed by architects Bates Smart.

Macquarie Park’s office vacancy decreased from 5.4 per cent to 4.8 per cent in the six months to January 2019 due to 10,000 sq m of stock withdrawal, mainly from the planned metro station, Property Council of Australia figures show.

“Macquarie Park is an interesting market where we are seeing increased investment in transport infrastructure and an increased focus on place making, yet the demand for space is still not there,” executive director Jane Fitzgerald said. 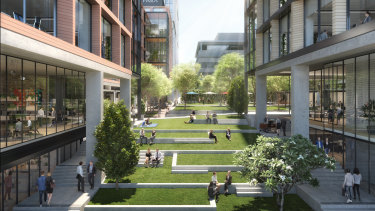 According to the City of Ryde forecasts, Macquarie Park will contribute about $9.5 billion to the local economy though its1900-plus businesses, 40,000 students and the 57,000 people expected to work in the area by 2028.

The area is home to many of Australia’s Top 100 companies including Optus, Orix, Brother, Canon, Hyundai, Dupont and Konica Minolta.