London Marathon: How do you reduce the environmental impact?

Tens of thousands of runners will take part in the London Marathon on Sunday – a gruelling 26.2-mile race around the capital. The iconic... 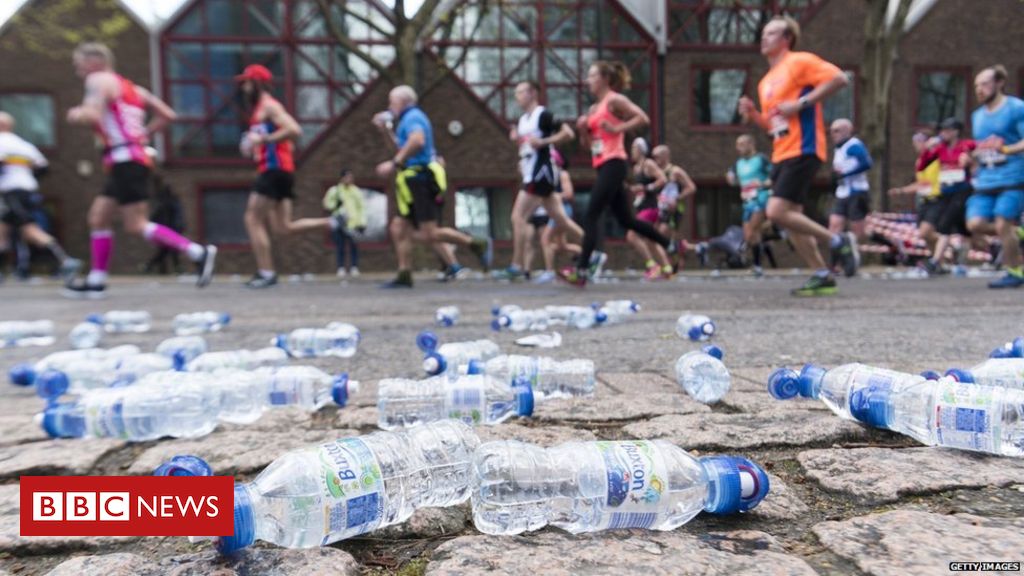 Tens of thousands of runners will take part in the London Marathon on Sunday – a gruelling 26.2-mile race around the capital.

Like concerts and other major events, the marathon also generates a massive carbon footprint with thousands travelling – some by plane – to the location. Waste from food, packaging and goodie bags gets left behind by spectators and runners.

In 2016, Westminster Council collected about 11 tonnes of rubbish, including tens of thousands of plastic water bottles, after the London Marathon.

This year the London Marathon is making some big changes and trialling a number of ideas to try to make the event more green.

London Marathon event director Hugh Brasner told BBC Radio 5 Live: “We’re trying to lead the way… there’s a raft of initiatives we are using this year that we think will lead to some huge behavioural changes in the future.”

Encouraging runners to trial bottle belts could also “hugely reduce the amount of bottles used on the course”, he added.

However, a marathon is one of the toughest physical events a runner can endure – so are the proposals practical?

Mike Robinson, who is running in Sunday’s marathon, thinks reducing the number of drinks stations is sensible.

“Realistically you’re not going to need to drink every mile, and that’s actually against medical advice,” he told the BBC.

However, he describes the bottle belt trial as “a good idea” which unfortunately “came a little late”.

“The email [about the bottle belts trial] came through about a week ago – but if you’re going to be doing that, you need to be practising with them a lot earlier.

“If you’re wearing something that moves around – even a bit – it becomes an irritation [during a marathon]. I had two sport gels in the side pocket of my shorts once, and after running two miles my legs started bleeding.”

And would runners be willing to drink out of paper cups rather than plastic bottles?

Runners Harald Greve and Cindy Ray have completed six and seven marathons respectively and say paper cups are actually better in some ways because they contain the right amount of liquid.

“The bottles contain a lot of drink you don’t necessarily need; what you want is a sip every few miles because you want to avoid needing the bathroom,” Cindy told the BBC.

The two, who have run marathons in London, Amsterdam, Copenhagen, Berlin, Manchester, Stockholm and Athens, say in most marathons outside the UK runners are given paper cups rather than bottles anyway.

However, the couple agree that running with bottles is “easier by a long way”.

“For recreational runners, I think the time wasted from drinking from a cup is just a matter of seconds – but for elite runners a couple of seconds might mean the difference between winning and losing,” says Harald.

It’s a view shared by Mike, who argues: “If you ever try drinking [from a cup] whilst you’re running, you end up getting more of it on your face than your mouth. For 75% of runners, they’d be cool with that, but for anyone trying to beat a time, telling them to stop is just like talking to a wall.”

Meanwhile, all three runners considered the edible pouches of Lucozade to be a good idea – but pointed out that many runners will be reluctant to consume something they haven’t already tried during a marathon, in case it makes them ill.

What else can be done?

Dr Andrea Collins, a lecturer at the University of Cardiff, has researched the impact of major events on the environment.

From her studies, she has found that “the way in which people travel to an event is one of the key contributors to the size of the environmental footprint”.

The London Marathon encourages participants to travel by public transport – and Dr Collins says that spectators can also think about the type of food and drink they purchase at the event – going for local or seasonal food without packaging where possible, and taking care not to over purchase.

Meanwhile, Mike’s tip for runners is to empty their bottles once they’re done with them.

“What usually happens is you have a few swigs and then throw your bottle to the side – because running with a bottle of water can change your running form quite a lot.

“But one thing I’ve only recently learned is that you can’t recycle a bottle that’s got water inside it – it’s worth publicising this so runners know to squeeze out the water before throwing their bottles away. It’s something I’ll be doing this year.”

Do marathons do any good for the environment?

Dr Collins says more and more people are becoming aware of the importance of holding big events in a sustainable way.

“Spectators and participants are realising that our ability to hold an event [in the future] will also depend on the quality of the environment. We can’t continue to consume resources at the rate we are – it contributes to the bigger issue of climate change.”

However, she also argues that big sporting events, when done right, can do some good.

“These high profile events raise our awareness of environmental impacts, and organisers can demonstrate in quite a positive way what they’ve done. People might be inspired – and other big races, like the Great North Run, will be looking to see what has been put in place at the London Marathon, and what works.”

A study by King’s College London found that air pollution in the capital fell by 89% during the last London Marathon due to road closures.

And the experience of running a marathon also encourages people to be more environmentally friendly, Cindy argues.

“Training for a marathon makes you more sustainable in day-to-day activities – I started walking or running to work every day and shunning public transport altogether – being environmentally friendly while training kind of sticks with you and becomes a way of life.”