JERUSALEM — A leading rival to Prime Minister Benjamin Netanyahu from within his own party rebuked the longtime Israeli premier on Saturday for calling... 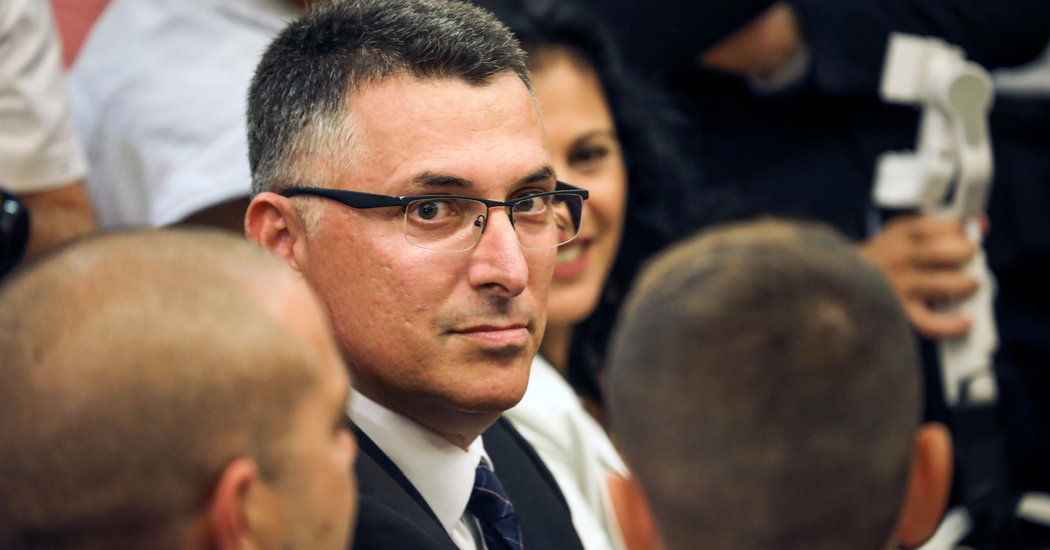 JERUSALEM — A leading rival to Prime Minister Benjamin Netanyahu from within his own party rebuked the longtime Israeli premier on Saturday for calling his indictment on corruption charges an “attempted coup” and demanded a primary election be held to replace Mr. Netanyahu and “save the country.”

The broadside by Gideon Saar, a popular and ambitious former minister who said he would be a candidate for Mr. Netanyahu’s job, compounded the political crisis confronting the prime minister and signaled what could be a bitter internecine fight for control of Likud, the right-wing party that has led Israel for most of the past four decades.

“That isn’t an attempted coup,” Mr. Saar said of Mr. Netanyahu’s indictment by the Israeli attorney general. “Not only is it wrong to say that, it’s also irresponsible to say that. It’s completely out of touch.”

At the same time, Benny Gantz, the centrist former army chief from the Blue and White party who defeated Mr. Netanyahu in a Sept. 17 election but was unable to form a government, called upon the newly weakened prime minister to go along with an idea he has so far refused to entertain: allowing Mr. Gantz to serve as premier for two years, after which, if Mr. Netanyahu were acquitted, Mr. Gantz would allow him to resume his post.

“A real patriot wouldn’t hold the citizens of Israel hostage to his legal battles,” Mr. Gantz said. “Likud leadership,” he added, “it is time to make your voices heard!”

Charged on Thursday with bribery, fraud and breach of trust, making him the first sitting prime minister of Israel to be indicted, Mr. Netanyahu, 70, denounced the law-enforcement system as out to get him and called on his supporters to “investigate the investigators.”

On Friday, Mr. Netanyahu said he would “accept the court’s decisions” but again demanded an investigation into how his cases were handled, saying law-enforcement officers who acted improperly “must be taken care of.” And he stepped up the political pressure by asking his supporters to rally behind him at a demonstration next week in Tel Aviv.

But by Saturday evening, Mr. Netanyahu’s defiance appeared to have given an opening to his adversaries both in and out of Likud.

Speaking on the Israeli version of “Meet the Press,” Mr. Saar said that Mr. Netanyahu’s problem in staying on as premier “isn’t legal, it’s political.”

Mr. Netanyahu had been unable to form a government after elections in April and in September, he noted.

“I haven’t heard a single person who thinks that after a third, or fourth, or fifth, or sixth election, that Prime Minister Netanyahu will succeed in forming a government,” Mr. Saar said.

Were Mr. Netanyahu to stay at the helm of Likud, Mr. Saar warned, either “this insane crisis,” with Israel politically paralyzed, would continue, or the center-left would gain power.

“There is only one way that will allow us to save the country and to extricate it from this crisis and to save the Likud’s rule — a primary to avert an election,” he said.

Mr. Saar, 52, was the strongest vote-getter in Likud primaries in 2008 and 2012, but he took a hiatus in 2014. He re-entered public life in 2017, and ran in the Likud primary election in February, finishing third. He said Saturday night that he believed he would “easily” form a government where Mr. Netanyahu had been unable to.

Only days ago, Mr. Netanyahu maintained rock-solid party support. But with Mr. Saar assailing him publicly, the cracks spread almost instantly. Haim Katz, a lawmaker who is chairman of the Likud Central Committee, endorsed Mr. Saar’s demand for an expedited primary election.

Mr. Gantz, in a speech in Tel Aviv, pointed to Mr. Netanyahu’s long history of exploiting his opponents’ misfortunes, and of fanning the flames of popular anger among his right-wing base, to argue that the prime minister had no business trying to put his prosecutors on trial in the court of public opinion.

He noted that Mr. Netanyahu had seized on corruption investigations into former Prime Minister Ehud Olmert to demand his resignation in 2008, saying those made it impossible for him to maintain the public trust.

And Mr. Gantz recalled Mr. Netanyahu’s role in leading right-wing protests against former Prime Minister Yitzhak Rabin in the days before his assassination in 1995. The prime minister, Mr. Gantz said, “needs to know well the dangerous price of words, which are liable to turn, heaven forbid, into lethal bullets.”