Libya’s Haftar Expands his Influence by Moving to Tripoli 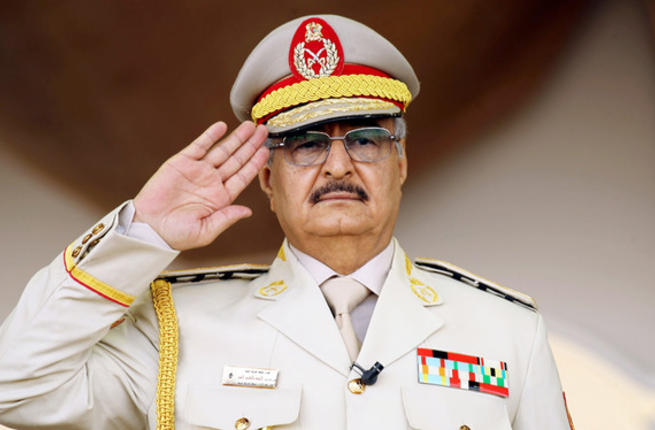 Libya’s General Haftar has become powerful enough to move on Tripoli and he owes that strength to a group of international backers who peddle the narrative that he is fighting terrorism.

When Khalifa Haftar returned to Libya after the overthrow of Libyan ruler Muammar Gaddafi in 2011, he found no support inside or outside the country.

That had changed by the time he attempted and failed to take over the internationally-recognised government based in Tripoli in February 2014.

After failing to capture Tripoli, he announced Operation Karama to capture the eastern city of Benghazi in May, claiming he would win the war in around six months if he was successful.

“If we receive military supplies from friendly countries, the time will be less,” he told the Guardian in an interview at the time, hinting at a collaboration with Egypt’s Abdel Fattah al Sisi and several Gulf states.

It took him three years to capture Benghazi but the belated success was largely down to help he received from these states, either through financial means, direct military support, or by legitimising his mission to overthrow the UN-backed government.

As part of Operation Karama, Haftar portrayed himself as a secular alternative fighting the spread of ‘Islamism’. His Libyan National Army (LNA), however, has been heavily dependent on several Salafi groups on the ground.

“His campaign is not as secular as some people want to portray it,” he added.

These Salafi fighters have also been deployed against Islamist rivals, such as Ansar al Sharia and even mainstream political opponents.

As a political and military operator, Haftar has also not shown hesitation in taking advantage of his opponent’s campaigns against Daesh terrorists for his own benefit.

When Haftar captured Derna in June 2018, he did so while the residents withstood a siege by the terrorist group, while making no attempt to fight the group himself.

Instead, he said: “The local people were forced to fight on two fronts, one against Heftar and the other against ISIS [Daesh].”

Once Haftar had established himself as an anti-Islamist champion, it was not long before Gulf support started to pour in.

“It took only six weeks for Haftar to attract the United Arab Emirates’s extensive military and financial support, after Haftar’s failed attempt to takeover the unity government in Tripoli,” said Krieg, explaining that under the pretext of fighting terrorism, Haftar was able to take out all opposition.

“Haftar has systematically tried to undermine or defeat the narrative of pluralism under the pretext of fighting ‘terrorism’,” he said, continuing: “It is a term that is being used lightly against any dissident or opposition force that does not cooperate with his LNA – in itself a loose affiliation of different militias that he has bought off with Emirati money.”

“Haftar was strategically supported by both Cairo and Abu Dhabi to take on the revolutionary generation of Islamists. His war on ‘terrorism’ that started the civil war in Libya, has been conceived and made possible by the UAE,” Krieg added.

“Without the support from Egypt and the UAE, which violates UN arms embargoes on Libya, Haftar’s self-declared Libyan National Army (LNA) would not have been able to constitute.”

After Haftar announced that his forces were moving to Tripoli, France, Italy, the UAE, the United Kingdom, and the United States urged “all parties to de-escalate the tensions” in a joint statement avoided mentioning Haftar’s military move.

For Krieg, the final version of the statement is hypocritical, especially on the part of France and the UAE, as they have not only sanctioned Haftar, but actively empowered him.

“But at the moment, Britain has taken a step back seeing that Haftar has not been a reliable partner.”

Migration has been an important factor for European countries, as well as their concerns about ungoverned spaces becoming safe havens for terrorism, Krieg said.

“For France and Italy, there is an economic dimension in Libya. A ‘stable’, even if authoritarian, Libya would be one of the richest countries in the Arab world with direct access to Europe. So Haftar promises to deliver on these issues,” Krieg added.

“But the issue is that Haftar is too strong to fail and too weak to control.”