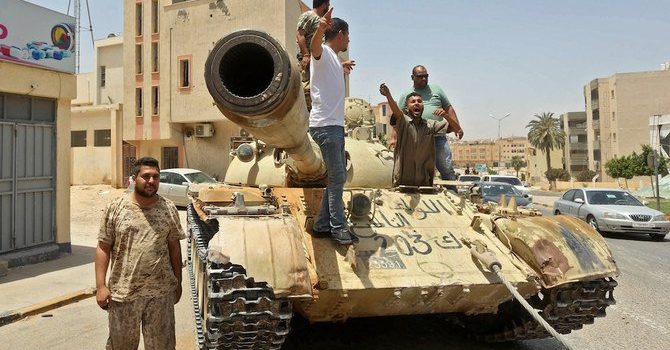 Libya3 Middle East5 UN5
DUBAI: Since dictator Muammar Gaddafi was toppled from power in 2011, Libya has been mired in chaos. A decade on from the protests that... 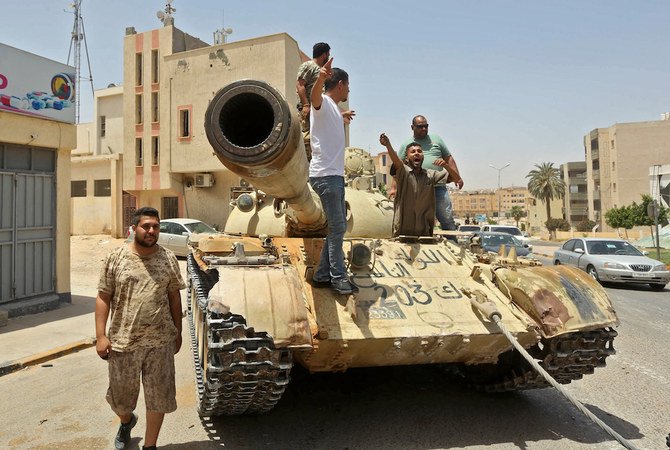 DUBAI: Since dictator Muammar Gaddafi was toppled from power in 2011, Libya has been mired in chaos. A decade on from the protests that led to his downfall, the oil-rich country is wracked by political instability, violence, economic chaos, and, since last year, an explosion in COVID-19 infections.

On Sept. 21, Libya’s eastern-based parliament passed a vote of no confidence in the country’s Government of National Unity, which was installed earlier this year. The provisional body, established to replace two rival administrations that had long fought each other, is supposed to carry the country into national elections scheduled for December 24.

Thus, just as Libya seemed to be making progress toward peace and stability, it again risks sliding into civil war, with fierce clashes breaking out between rival factions in the capital Tripoli.

Foreign involvement is arguably the main reason why Libya has been unable to move on and establish a unified, stable administration. By sponsoring their preferred side in the conflict, experts say external actors have periodically added fuel to the fire.

“The main problem that stands against Libya’s stability is foreign interference and the existence of foreign forces and mercenaries fighting on its soil,” Dalia Al-Aqidi, a senior fellow at the Center for Security Policy in Washington, D.C., told Arab News.

“In a country like Libya, achieving security and political stability requires the unity of the different major political players. However, when you have local politicians with foreign agendas and loyalties, it makes it difficult to unite around one shared goal.”

Indeed, experts believe Libya has become little more than a playground for competing foreign interests, with the spoils of war — oil, arms contracts, and strategic influence — up for grabs.

“The extra energy to conquer others has come from foreign support and it is this external support for different groups, patrons, and clients that has kept the conflict going, as has the war economy of smuggling, corruption, bribery, protection rackets, control of critical infrastructures like airports and seaports and oil terminals,” Jonathan Winer, a scholar at the Middle East Institute and a former US special envoy for Libya, told Arab News.

The only way such a corrupt and factious system is replaced, says Winer, is with a “unified civilian government that divides up the spoils in a way that is inclusive and provides something for (nearly) everyone.”

Things did not look so bleak for Libya when Gaddafi fell. Inspired by events in neighboring Tunisia and Egypt, young Libyans took to the streets in Feb. 2011 demanding an end to his 42-year rule. But when his security forces launched a deadly crackdown, the movement grew into an armed revolt.

Fearing the regime would slaughter the protesters to maintain its grip on power, the US, France, and Britain sent warplanes to support the uprising. As the conflict turned against him, Gaddafi fled Tripoli but was soon captured and killed by rebels on Oct. 20, 2011.

In Aug. 2012, the rebel-led National Transitional Council handed power to an authority known as the General National Congress, which was given an 18-month mandate to establish a democratic constitution.

Instability persisted, however, with a string of major terrorist attacks targeting foreign diplomatic missions. In May 2012, an assault on the US consulate in Libya’s eastern city of Benghazi left US ambassador Chris Stevens and three American staff dead.

Responding to the threat, a Libyan-American military officer Khalifa Haftar launched an offensive against armed groups in Benghazi in May 2014. He named his forces the Libyan National Army and soon won the backing of Arab countries that saw him as their best possible partner in curbing the spread of political Islam, most notably the Muslim Brotherhood.

Although they have both supported UN mediation efforts in Libya, France and Russia have also offered Haftar their backing, the latter allegedly green-lighting the use of mercenaries, a claim that Moscow denies.

Elections were held in June 2014, producing the eastern-based parliament, or the House of Representatives (HoR), dominated by anti-Islamists. However, in August that year, Islamist militias responded to the result by storming Tripoli and restoring the GNC to power. The Haftar-affiliated HoR took refuge in the city of Tobruk.

As a result, Libya was left with two governments and two parliaments.

In Dec. 2015, after months of talks and international pressure, the rival parliaments signed an accord in Morocco establishing a Government of National Accord. In March 2016, GNA chief Fayez Al-Sarraj arrived in Tripoli to install the new administration.

However, the HoR did not hold a vote of confidence on the new government and Haftar refused to recognize it.

Then, in Jan. 2019, Haftar launched an offensive into oil-rich southern Libya, seizing the region’s capital, Sabha, and one of the country’s main oilfields. In April, he ordered his forces to advance on Tripoli. By the summer, however, with Turkey deploying troops to defend the Tripoli administration, the two sides had reached a stalemate.

What had begun as a popular uprising had degenerated into a proxy war, predominantly centered around competing Turkish and Russian interests in the region.

A UN-brokered ceasefire deal was finally reached in Geneva on Oct. 23, 2020, followed by an agreement in Tunis on holding both parliamentary and presidential elections in December this year.

The Government of National Unity, which is headed by Abdul Hamid Dbeibah, was approved by lawmakers on March 10, 2021.

However, on September 9, Aguila Saleh, the parliament speaker, ratified a law governing the presidential election that was seen as bypassing due process and favoring Haftar. Subsequently, parliament passed the aforementioned no-confidence vote in the unity government, casting the upcoming elections and the hard-won peace into uncertainty.

As a result of this prolonged political discord and internecine strife, ordinary Libyans have seen their living standards collapse and critical infrastructure crumble. Earlier this year the dinar crashed and consumer prices surged.

Fuel shortages and power outages have become commonplace, and even clean water is rare in a country that was once one of Africa’s richest and remains the continent’s second-biggest oil producer after Nigeria.

“Libya is a damaged society but not a wretched one,” Karim Mezran, director of the North Africa Initiative and a resident senior fellow with the Rafik Hariri Center and Middle East Programs at the Atlantic Council, told Arab News.

“The biggest problems are the COVID-19 pandemic and the fact that the country serves as a major hub of African migration to Southern Europe. Yet, with a modicum of stability, Libya is and should be a wealthy state, given the copious oil and other natural resources it has combined with a relatively small population.”

Instead of emerging from the Gaddafi era with greater openness, economic growth, and productive engagement with the international community, Libya has experienced lawlessness and institutional collapse, becoming something close to a failed state.

“A decade of violence and unrest, a struggling economy, and the COVID-19 pandemic have exacerbated the challenges faced by all those living in the country,” Tom Garofalo, the International Rescue Committee’s Libya country director, said in a recent statement.

“Today, an estimated 1.3 million people are in need of humanitarian assistance — a 40 percent increase compared to 2020.”

Experts agree it is leadership that is lacking in Libya. In Winer’s view, the UN needs to be “much stronger, firmer, tougher, and steadier” if it hopes to stabilize the country.

“There needs to be consequences when countries say one thing, like promising to support peace and withdraw their forces and do another, like supporting their clients and keeping their mercenaries and military support in place,” he said.

Jan Kubis, who was appointed UN special envoy to Libya and head of the UN Support Mission in Libya in January, is yet to openly press all parties to force a resolution. “Though it is hard to blame him, given Russian and Turkish reluctance to move forward with removing their mercenary forces, as they promised to do,” Winer said.

Undoubtedly, there has been significant progress in the past year toward resolving Libya’s divisions. Still, many Libya experts, including Al-Aqidi, believe making sure elections take place is paramount.

“December elections represent the best opportunity for Libya to finally achieve peace and stability,” she told Arab News. “It is the one and only way for Libya to recover from violence and chaos.”