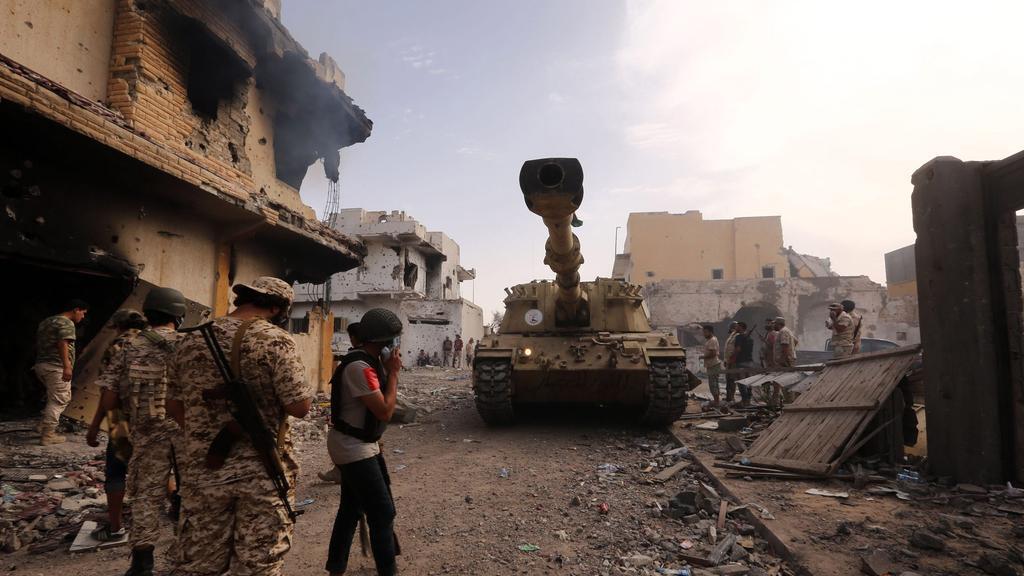 The Libyan National Army (LNA) led by Field Marshal Khalifa Haftar continued targeting forces of Government of National Accord (GNA), headed by Fayez al-Sarraj, south and east of Tripoli, and at the coastal city of Sirte.

LNA’s Karama operations media center reported that more than 30 militants were killed and captured in an ambush of the army forces during an operation in Saladin axis, south of the capital.

Clashes erupted near al-Hadabah project, which the media center described as militias’ “desperate attempts” to advance or hold their positions.

A statement issued by the army said that the air force targeted a site of militias inside the camp of Abu Muath in Gharyan city, and a second strike targeted “Ghout al-Reeh” area, which is about 80 km south of Tripoli.

GNA’s Ministry of Interior announced that two security men were killed and four others injured after an attack on the headquarters of the Rapid Intervention Force in Ain Zara, south of Tripoli.

For his part, spokesman for GNA’s Ministry of Health Fawzi Onis, announced that three people were killed, including two policemen and a civilian, and four others were injured as a result of the bombing near a gas station in the region.

This is the second time that the National Army targeted a facility of the ministry, after recently targeting its headquarters in Tripoli.

The ministry said in a statement that it will hold the perpetrators accountable of these criminal acts, and bring them to justice for what they have committed.

Meanwhile, Sirte’s protection and security unit announced that three of its members were injured during an air strike, and indicated in a statement that this shelling comes two days after the unit withheld a car smuggling immigrants. The car was carrying 14 people of Egyptian nationality coming from Baida eastern city.

LNA’s media center issued a brief statement saying it had launched an airstrike on a site used by militias at al-Saadi camp in Sirte, 450 km east of Tripoli, whose facilities are used as military storage units for equipment and weapons.

In addition, the High Council of State (HCS) in Tripoli urged GNA to harness all possibilities to support the war effort, “mobilizing all efforts with a view to thwarting the aggression” against GNA.

The statement welcomed any efforts seeking to repel the aggression, end the bloodshed and cruise the country out of its crisis.