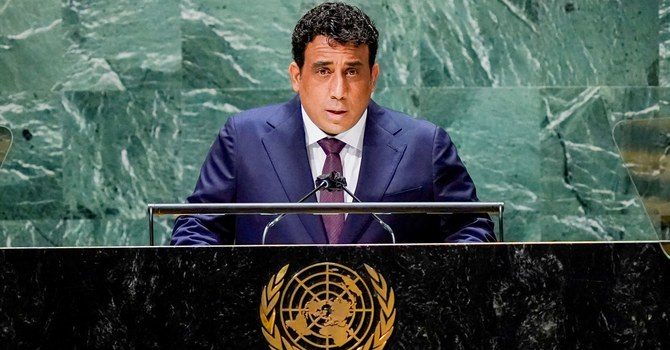 Libya7 Mohammed Al-Menfi1 UNGA 20213
WASHINGTON: The chairman of the Presidential Council of Libya on Thursday said he would be staging an international conference next month to gain backing... 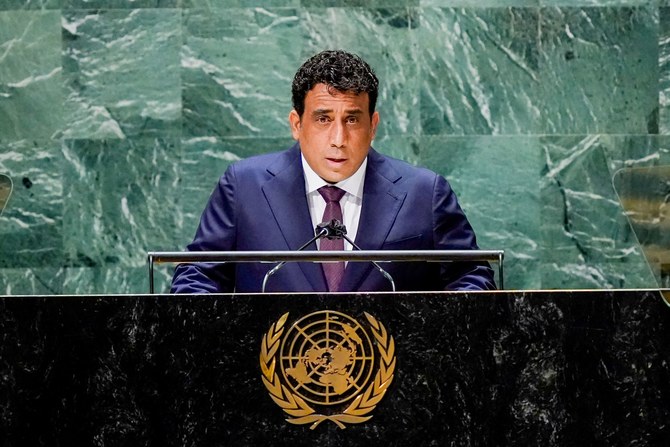 WASHINGTON: The chairman of the Presidential Council of Libya on Thursday said he would be staging an international conference next month to gain backing for efforts to bring stability and security to the country.

Mohammed Al-Menfi revealed that security, military, and economic issues would top the agenda of the meeting that would also shore up support for the upcoming national elections.

Al-Menfi, who is attending the 76th session of the UN General Assembly in New York, added that the conference would host Libyan groups eager for reconciliation along with regional and international parties to push for the stability and security that has eluded Libya since the 2011 fall of Muammar Qaddafi who ruled the country for 40 years.

The Libyan leader said despite working on reconciliation efforts among Libyan groups, challenges still lay ahead on the road to achieving democracy.

He noted that Libya had made “significant strides” in implementing solutions that were mandated through agreements between the different Libyan groups and UN resolutions.

However, despite the progress, Al-Menfi pointed out that the country was still “faced with serious challenges and fast-paced developments” that could stall the ongoing political process.

On the ground, Libya remains confronted by many daunting challenges toward achieving political unity among its entrenched warring parties. Conflict still persists between the Tripoli-based Presidential Council and Gen. Khalifa Haftar who controls the eastern half of the country as well as the Libyan armed forces.

A transitional government was formed earlier this year to move the country forward toward elections on Dec. 24.

“Libya has the choice to either succeed toward becoming a democracy through free and transparent elections or go back to square one of infighting and military conflict,” Al-Menfi said.

He called on the international community to assist Libya in removing foreign militaries and mercenaries from the country as a way to build a “conducive environment for safe and transparent elections.”

Al-Menfi also demanded that European countries share their responsibilities in addressing the issue of illegal African migrants who pass through Libya on the way north to Europe, adding that his country had carried the burden alone and deserved support from the international community.

On the issues of human rights abuses that plagued Libya during its decade-long civil war, and the presence of terrorist groups on Libyan soil, he said his government was committed to safeguarding the human rights of the Libyan people and had worked toward bringing meaningful reconciliation through detainees and prisoners exchange, reparation, and addressing the fate of missing people.

Al-Menfi reiterated Libyan support for the Palestinian people and said his country was committed to the establishment of the Palestinian state with Jerusalem as its capital.