Lebanon Protesters Shut Down Parliament and Clash With Police

BEIRUT, Lebanon — Protesters on Tuesday stopped Parliament from convening to discuss a package of controversial laws, as crowds blocked roads leading to government... 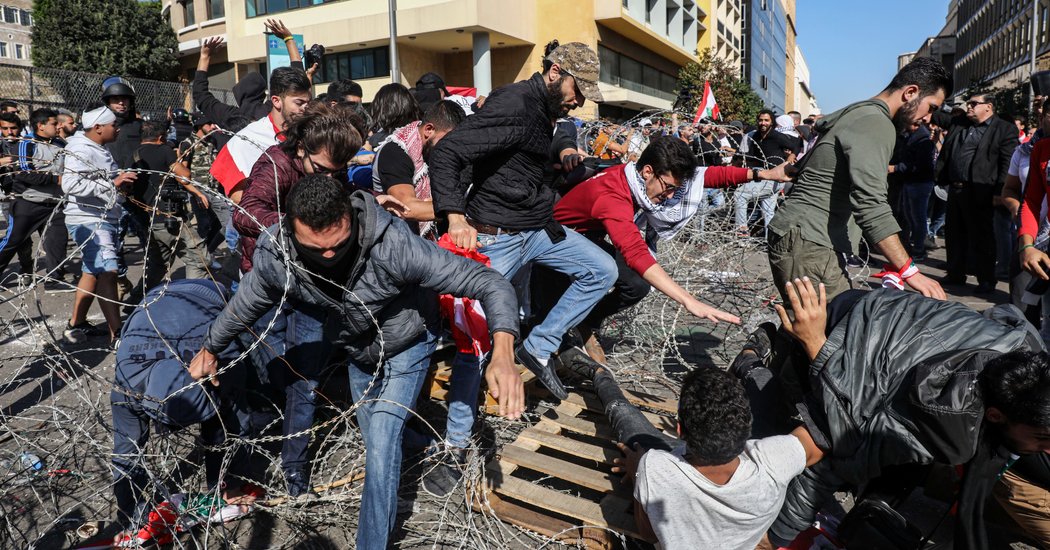 BEIRUT, Lebanon — Protesters on Tuesday stopped Parliament from convening to discuss a package of controversial laws, as crowds blocked roads leading to government buildings and skirmishes broke out with the riot police.

The action comes on the 34th day of widespread antigovernment protests that have both galvanized and paralyzed the country, and the protesters’ success seemed likely to sharpen tensions between the government and the people.

Several lawmakers had said before the Parliament session was postponed that they would boycott the session, but others on Tuesday could not get through the roadblocks on streets surrounding government buildings.

The session had already been pushed back once: Protesters vowed last week to form a human chain to prevent lawmakers from gathering.

Scuffles broke out on Tuesday at the barbed-wire barrier between the public square where demonstrators have gathered day and night and the government palace overlooking it. The riot police were seen beating some protesters with sticks and knocking them to the ground.

Nearby, shots were fired into the air as protesters blocked a convoy of cars attempting to carry lawmaker to the Parliament building.

Since former Prime Minister Saad Hariri and his cabinet resigned on Oct. 29, the country’s powerful political blocs have been reluctant to form a new government of nonpolitical experts, as the protesters have demanded. Instead, after weeks of deliberation during which the economy slid further toward crisis, the parties proposed a new candidate for prime minister: Mohammad Safadi, a wealthy former finance minister.

The protesters rejected him immediately, saying he was too closely identified with the political class they want swept from power.

The move is just one of a series of proposed changes that the protesters have rejected as half measures that would do little to overhaul Lebanon’s sectarian political system, eradicate government corruption or save the crumbling economy.

Among the laws that were to be discussed on Tuesday was amnesty for certain prisoners, including those convicted of drug-related crimes, those accused of joining a terrorist organization and those accused of shooting weapons.

The proposal has long been popular in parts of the country where many residents have been prosecuted over such crimes, but protesters and civil society activists have questioned whether such amnesty could be applied equitably and safely.

The demonstrations, which by some measures have at times drawn a quarter of Lebanon’s population into the streets, have been largely peaceful.

But at least four people have been killed in events related to the protests. Last week, a soldier shot a man who was helping to block a road in the town of Khalde.