Lebanon is Experiencing a Social Revolution 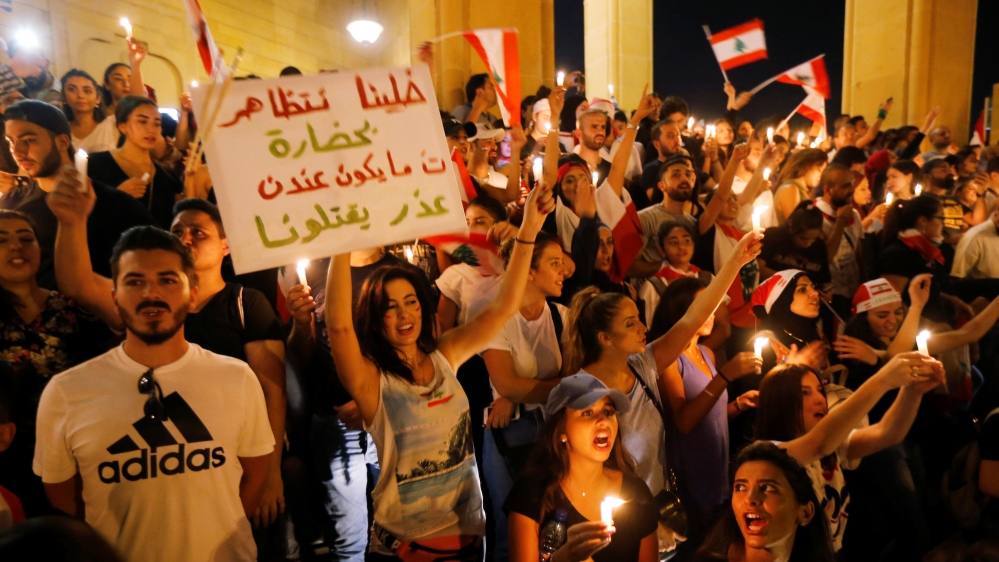 Since October 17, Lebanese citizens from all walks of life have been taking to the streets in unprecedented protests that transcend not only sectarian lines but also class and regional ones.

What unites the protesters are demands for the Lebanese cabinet, which was formed in January of this year, to resign. For the past 10 months, it has failed to save Lebanon from a worsening financial crisis predominantly caused by government mismanagement and corruption that predated its formation.

By the second day of demonstrations, protesters were beginning to characterise their actions as a revolution. While it is not yet known whether the protests will result in a political revolution, they already illustrate a remarkable social one.

In 2005, Lebanon witnessed the so-called Cedar Revolution, when people demonstrated in huge numbers against the Syrian military occupation of their country. But the protests then did not call for a change in the country’s political system, which remains dominated by the political leaders of Lebanon’s various sects.

The 2005 protests were driven by the political party of the late Prime Minister Rafik Hariri, father of the current prime minister, Saad Hariri, and its allies, who opposed the Syrian regime. That led to counter-protests orchestrated by pro-Syrian Hezbollah and its allies.

As such, political parties were the main mobilisers of the 2005 protesters. Although each of the rival political camps had followers from different sects, Hariri’s support base was primarily Sunni Muslim and that of Hassan Nasrallah’s Hezbollah was predominantly Shia Muslim.

In 2015, as rubbish piled up on streets across the country, demonstrators headed to downtown Beirut to protest against the government’s mishandling of rubbish collection and processing. This time, they came from across the country’s sectarian divides and some protesters even started to question their own sects’ political leaders. But this questioning was limited to those in the anti-Hezbollah camp as most of the Shia community did not publicly critique Hezbollah.

Despite some demonstrators trying to escalate the demands of the 2015 protests, they did not lead to the fall of the government. In the run-up to those protests, rival political parties had been trying to discredit one another. But when faced with a threat to the political status quo, Lebanon’s political elite stuck together, using divide-and-rule tactics like circulating rumours that some of the civil society leaders of the protest movement were paid foreign agents, to cause the movement to disintegrate.

Still, the 2015 protests planted the seed of organised public action, which has since been slowly but steadily growing – first through contesting municipal elections, then by fielding candidates against the dominant traditional political parties in parliamentary elections, and since then in a quiet but ongoing programme of civic engagement by some of the groups that were born out of the protests, such as Beirut Madinati.

There are a few key ways in which these latest protests differ from those in 2005 and 2015. As in 2015, but unlike in 2005, they are part of a genuine grassroots movement that has not been directed by any political party. They are cross-sectarian in a broader sense than those of 2015. They are taking place across Lebanon, rather than only in Beirut. And they are demanding the fall of the government from the outset, while criticising political leaders from every sect.

Although the number of people on the streets was much higher in 2005, the current protests are much larger than those of 2015. They are also taking place in regions where such public action used to be considered impossible, particularly in southern Lebanon where people from the Shia community have been publicly denouncing traditional Shia leaders, including Nasrallah.

The government’s response to the current protests has been its usual carrot-and-stick approach: walking back on proposals to increase taxes while cracking down on the protests through violence.

Civil society groups involved in the protests are also devising tactics to counter the violence and facilitate mobilisation (one group offered free scooter rides to protest sites) and creating a reform roadmap for the Lebanese state.

For the first time, the protests are a condemnation of the political status quo that has, since even before Lebanon’s 15-year civil war, been largely recycling the same faces (or their relatives and descendants) in parliament, the cabinet and high-level positions in the civil service and military.

How the Lebanese government and political elite will handle this existential threat remains an unanswered question, but the radical shifts on the ground in terms of the protest movement itself tell an important story.

Decades of corruption and patron-client relations between citizens and their leaders have only led to a downward spiral that risks wrecking the country’s economy and pushing its people towards the poverty line and below. The protests have only been taking place for a few days but the protesters already show a growing awareness not only of the governmental tactics typically used to try to diffuse popular movements but of their own needs as citizens, regardless of class or sect.

This alone is a revolution in a country where the political system is, for the most part, a modern version of feudalism. Whether it leads to radical political change in the near future remains to be seen, but it reveals that the seed of social change planted in 2015 has germinated.