Spontaneous anti-government protests erupted late on Thursday in the wake of austerity measures and a slew of new taxes Hundreds of thousands...

Hundreds of thousands of people hit the streets of Lebanon on Sunday in the biggest protests in the last four days, demanding an end to economic woes and perceived government corruption.

Protests have grown steadily across the Mediterranean country since people took to streets on Thursday evening in response to a proposed tax on WhatsApp calls and other messaging services.

The capital Beirut, second city Tripoli in the north and the southern port of Tyre came to a standstill, with streets filled with protesters waving the national flag, chanting “revolution” or “the people demand the fall of the regime” resembling the 2011 Arab Spring. Big gatherings were also reported from Sidon and Baalbak cities.

“I am here because I am disgusted by our politicians. Nothing works…,” said Cherine Shawa, 32, an interior architect, in Beirut.

Dabke, DJ and cards: #LebanonProtests against the dire economic conditions continue – in their own unique way. #لبنان_ينتفض pic.twitter.com/z7Qnus5rWo

Ending rampant corruption is a central demand of the protesters, who say the country’s leaders have used their positions to enrich themselves for decades through favourable deals and kickbacks.

“We’re here to say to our leaders ‘leave’. We have no hope in them but we’re hopeful that these protests will bring change,” said Hanan Takkouche, in her 40s and among a group of women in the capital. “They came to fill their pockets. They’re all crooks and thieves,” she added.

‘The people are one’

A nationwide general strike has been called for Monday to demand government overhaul despite pledges of reforms by Prime Minister Saad al-Hariri, and despite the resignation of government ministers on Sunday.

On Friday, al-Hariri gave a 72-hour deadline to his coalition partners to agree on a solution to the country’s economic woes without imposing new taxes. 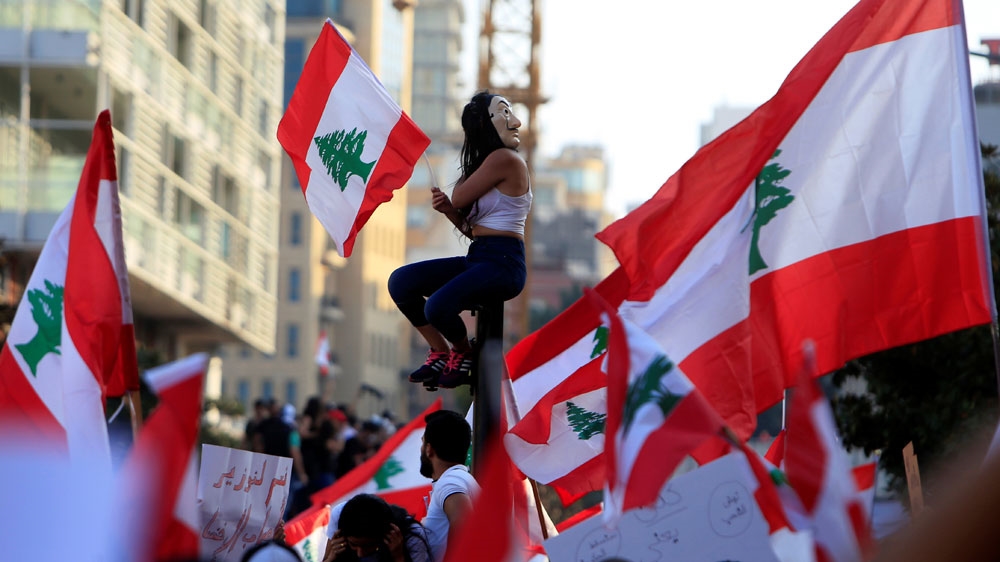 A demonstrator sits on a pole while carrying a national flag during an anti-government protest in downtown Beirut, Lebanon October 20, 2019. REUTERS/Ali Hashisho [Reuters]

“They’ve simply lost trust in the politicians,” Dekker said. “Tomorrow is going to be even more pressure because it’s a general strike.”

Banks, shops and schools will be closed, she said, while travel may be restricted as streets linking the north and south are blocked.

“We’re going to see whether what the government offers tomorrow will be enough, because it doesn’t seem to be at this stage that there’s any intention of resignations,” she said, adding that resignations are what the majority of the people are calling for.

Hamza, one of the protestors in Beirut’s Martyr Square, told Al Jazeera he drove two hours from Lebanon’s Bekaa Valley to join rallies in Beirut.

“They [politicians] are not giving us anything, they took everything, and we don’t have anything here,” he said. “Since 2005 they have been promising us, but then nothing happened.” 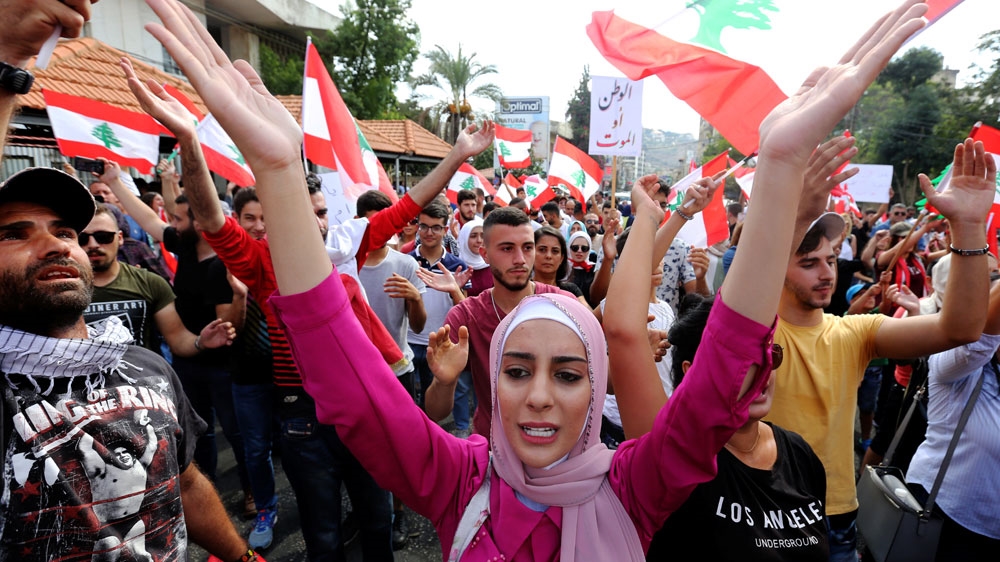 Ending rampant corruption is a central demand of the protesters, who say the country’s leaders have used their positions to enrich themselves for decades through favourable deals and kickbacks [Aziz Taher/Reuters]

The protesters have been united under the national flag breaking the sectarian divide in the country.

Dekker noted that during the rallies, there were Sunni, Christian, Shia and Druze leaders standing in front of parliament to ensure protests remained peaceful.

Like many others in the popular protests, Hamza said: “The people are one – Shia, Sunni, Christian, they’re all one here.”

On Saturday, Hezbollah chief Hassan Nasrallah, whose movement is part of the coalition government, warned that a change in government would only worsen the situation.

Lebanese citizens have been suffering from tax hikes and dire economic conditions in the heavily indebted country. 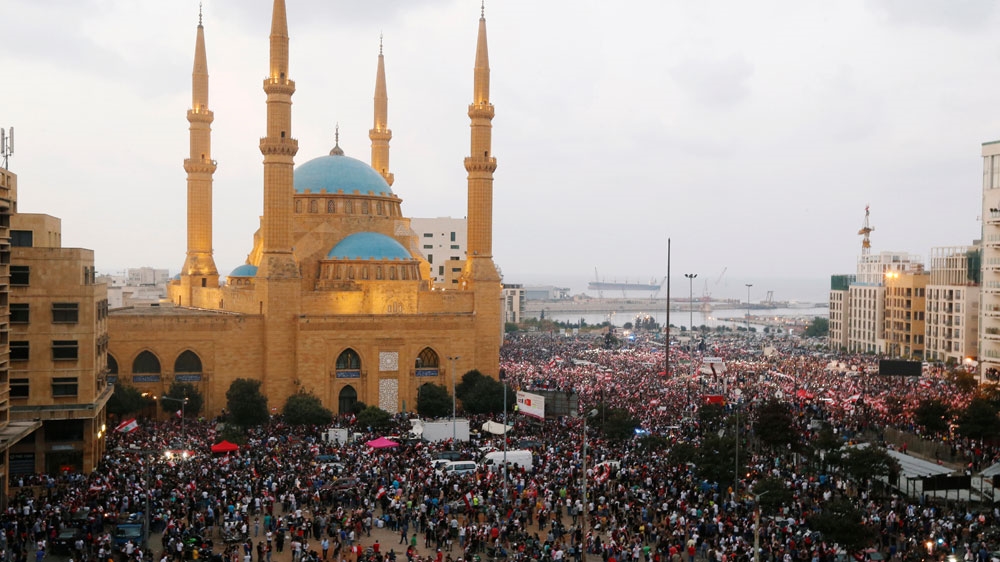 Lebanon’s public debt stands at around $86bn – more than 150 percent of gross domestic product, according to the finance ministry [Mohamed Azakir/Reuters]

Lebanon’s public debt stands at around $86bn – more than 150 percent of gross domestic product, according to the finance ministry.

This is why they have been calling for a new cabinet that is independent from the ruling forces in the country, he noted.

“We are not settling for small kind of reforms … what we need is taxes on those who have been benefitting from the economic system for the last 30 years,” Hassan said, adding that Lebanon’s economic problems are “very structural”.

Lebanon’s political system was set up to balance power between the country’s religious sects, including Christians, Sunni Muslims, Shia Muslims and Druze.

But critics say it entrenches political patronage and pits citizens against each other along sectarian lines.

According to Hassan, the belief that Lebanon is always on “sectarian strife” is merely rhetoric used by politicians who wish to silence the people.

The country of around 4.5 million people is hosting some 1.5 million Syrians who fled the conflict with many politicians blaming the refugees for the country’s woes.